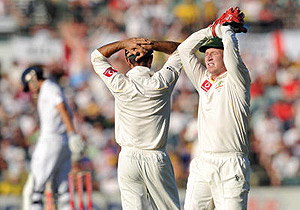 Ricky Ponting can’t take a trick currently. Having been out-batted and out-bowled in Adelaide, he’s now been out-tossed on Day 1 in Perth. Having taken the gamble to play four quicks, and having made the near-unprecedented decision to bowl first, he promptly lost the toss to Andrew Strauss and was sent in on a greenish WACA deck.

Then, just to rub salt into the wounds, Australia were all out for 268 with around an hour of yesterday left to play.

And if that wasn’t enough, a late deflection off Strauss’ handle and glove fell annoyingly short when Ponting appeared to be letting it come to him.

I’m not a big gambler, admittedly, but if I see Ponting in a casino any time soon, the house and mortgage is going against him.

After the first half an hour of woe in Adelaide last week, I really thought the Aussie team’s fortunes couldn’t sink any lower, but when Shane Watson fell just after Drinks in the first session, Australia had sunk to 4/36 and were still digging.

While England bowled well, and with the recalled Chris Tremlett the pick, they weren’t bowling hand grenades.At least four and maybe five of the Australian wickets were to shots that probably didn’t need to be played.

It really was one of those days where nothing went right.

Tremlett struck in his first over of the day, bowling Phillip Hughes. Hughes played all around a straighter one that hit the top of off stump, and which on replay showed he was trying to play through mid-wicket. I’m not sure if I’m alone on this, but every time I see Hughes getting out – and his dismissal in Hobart for Australia A was another one – it just gets uglier and uglier with every replay.

Ponting himself came out with intent, and looked like he was a man on a mission.

Despite getting off the mark with an edge through or over the vacant fourth slip, he played a cracking pull shot that gave a hint of things to come. But then he sparred at one from Jimmy Anderson that he really should have left, only to see Paul Collingwood dive high to his right, to pull in the undisputed catch of the summer.

When Michael Clarke unnecessarily wafted outside off to give Matt Prior catching practice and Tremlett his second wicket, I was starting to wonder at 3/28 if I’d been somehow transported back to Adelaide last week.

It really was déjà vu all over again.

Watson then wore a full ball from Steve Finn on his front toe, and found reason to refer a plumb LBW decision up for another look. Unsurprisingly, and much like Police Academy re runs, the ending didn’t improve with additional views.

Mike Hussey and youngster Steven Smith saw Australia through to lunch, and even looked to be putting together something of a partnership, only for Smith to push forward with hard hands just after lunch, and for Strauss to pocket a handy catch at first slip.

Tremlett, with three of the first five Australian wickets to his name, was having quite the return after several years on the English fringes, and was proving to be a massive handful for the Australian batsmen.

Hussey and Brad Haddin started on yet another rescue mission in the second session, and while both took their time to get going, they had added more than 60 together by the second drinks break of the day.

Hussey was hitting his straps again, and as has been the case all series, was quick to put away anything wayward from Finn. However, he too fell back to old habits, and found himself guiding off-spinner Graeme Swann through to Prior.

Though a noise was definite, Umpire Billy Doctrove ruled not out.

Strauss might have had a mini heart attack when Prior immediately and solely referred the decision upstairs, but Hotspot showed a thick edge, the ‘keeper was excused, and Hussey was on his way.

Haddin and Mitchell Johnson would negotiate Australia into, and then out of the Tea break, with both playing some impressive shots. Johnson took a liking to Swann especially, launching several trademark slog sweeps at and over the midwicket fence.

Shortly after Tea though, Haddin became another to fall victim to the play-a-shot-you’ll-regret-later curse and a lack of footwork saw him parry an Anderson delivery high toward Swann at second slip. Perhaps inspired by Collingwood the teammate or Collingwood the team, Swann took an overhead “speccy” that wouldn’t have looked out of place at the MCG in September.

But the Australian tail would offer a gritty determination, with Johnson and Siddle, and then Siddle and Hilfenhaus taking advantage of the best batting conditions of the first day. Hilfenhaus showed an enterprising array of shots he’s not generally known for, and 220 firstly, and then 250 both came and went in style.

When Swann finally claimed him, most Australian fans around the ground would have been happy with 268, considering the carnage witnessed in the first half of the day.

Strauss and Alistair Cook saw England through to stumps, and they’ll resume today on 0/29.

For Australia, they must make the most of the morning conditions, as did England on Day 1.

For them to have any chance in this match, you’d expect at least three Englishmen would need to back in the pavilion by Lunch.

Ryan Harris looked most likely to break through late last night, and he drew the Strauss deflection that fell short of Ponting. Johnson too, showed good signs of improved action and shape, which admittedly wasn’t setting the bar real high after his Brisbane display. It was good to see him moving the new ball, regardless, and he’ll have to do all that and more for Australia to get their Ashes campaign back on track.

England has shown Australia the way forward in this game, and Day 2 shapes as crucial for the home side.

A result now seems likely in this Third Test, and Australia quite simply must step up to keep this series alive.