Time for Ricky Ponting to hand over the captaincy 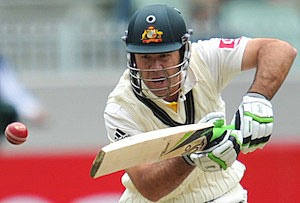 Ricky Ponting of Australia plays a shot before being dismissed on day one of the Fourth Ashes Test match between Australia and England at the Melbourne Cricket Ground in Melbourne, Sunday, Dec. 26, 2010. The traditional Boxing Day test is expected to draw a record crowd by the end of play. (AAP Image/Julian Smith)

Cricket at its basest level is still the noblest sport of all. When decency is transgressed, cricket will exact its retribution. Prior to the lead up for this the fourth Test, fans and media alike were unanimous in castigating the captain, the selectors and even Siddle’s pet dog. It was irrelevant if he actually has a dog.

Boxing Day was being portrayed as the day Ricky Ponting would be judged. Opinions had been voiced by influential commentators about the uncouth behaviour of Australian cricket teams; especially when they were winning. There was no sledging from the Australians today. But their batting and bowling was still ugly to see.

Watson was dropped in the first over and then again in the second. He perished soon after and Hughes once again flattered only to deceive.

The groans when Ponting was caught behind signified the collective mourning of a proud cricket nation. Perhaps the dancers on his grave have increased in number after today.

I have long supported Ponting as the right man to captain Australia. I think, now, he would serve Australia better by handing the captaincy to someone else. He is too consumed by his desire to see Australia do well and this is impacting his batting. He still remains Australia’s eminent batsman, and has the next innings to prove that.

At three down for 37, every critic would have been wagging their finger and saying, “I told you so.” When Hussey was hit in front and the decision referred it may well have been the end. He survived.

Clarke had his own personal demons but was being shepherded by Mike Hussey. Hussey was all business and enterprise and scampered his runs with the fleet footedness of a shopper at the Boxing Day sale at Myers.

There was tacky bounce and Tremlett again was the pick on this opening morning. Surprisingly, Strauss did not have a short leg for Hussy and only two slips. This appeared to be a field devised in the video backroom and failed to seize the advantage of three down before lunch. More pressure and it could have been a lot worse for Australia.

Michael Clarke had a date with destiny. His own and that of Australian cricket. Could he play the definitive “captain in waiting” innings that the situation demanded? This innings would answer multiple questions.

A straight drive was as emphatic as anything Clarke had said over the last two years. Swann was introduced with twenty minutes to go for lunch. Clarke was light on his feet.

The shepherd deserted his flock at 4-58 and Clarke was going to have to nurse Smith. There will be cries in the daily papers savaging Australia’s top order and the populist view will point to a captain bereft of ideas, a vice-captain ill suited, and an opener not ready for Test cricket.

Ponting, Watson and Hussey fell to cracking deliveries and their dismissals were caused by good bowling. Anyone that has played cricket will know there is always the unplayable ball. Tremlett to Ponting was a classic. It swerved in and cut away and Swann grabbed a hard chance coming across first slip. Only the very best batsmen would even manage to snick such a good ball. The captain is out of luck with the toss also. He would have inserted England if he had won the toss.

Philip Hughes will always have his critics and these are growing by the day. I have been an advocate of Hughes since he came on the scene. My heart lifted as he attacked Tremlett in this first over and hit two fours and a brace. The cover drive was exhilarating.

He perished at 16 trying to carve one through gully. It looked ugly and I must admit I was premature in my endorsement. He is not the player that debuted against South Africa two years ago. He needs remedial work of the nature that saw Johnson remodeled. Will there be enough time before Sydney?

Once again the pitch, like in Perth, had life and this can only be good for cricket. The pre-lunch session was tense and the bowlers decidedly on top.

Melbourne’s capricious weather preempted lunch and delayed proceedings and it gave me an opportunity to wander among the 80,000 crowd. There was an incessant crescendo and it is sustained throughout the afternoon. Like a million cicadas caught in an electric storm.

This must affect cricketers making their first appearance at the MCG. This, apart from Eden Gardens, is cricket’s biggest stage, and it was crying out for a tour de force.

Smith and Clarke strode out at 1.55pm and from the first ball it was clear that Smith was going to be exuberant. Anderson was flayed towards cover and it was only the wet outfield that denied him a boundary.

Smith faced Bresnan for the second over and the second ball was hit through point off the backfoot and he ran three when there was only two for the taking.

Anderson’s second over after lunch showed there was bounce in this pitch and surprisingly still no short leg. As it turned out, Smith played when he should have abstained. Another mark for the critics. Smith needs to spend seven weeks with the Jacobite monks.

Clarke must be close to the executioner’s sword. He nibbled when he should have eschewed. Does he covet the captaincy so much that his thoughts are scrambled? There was no cricketing need to play at the ball.

Haddin was throwing the bat at everything and at 7-77 the symmetry of the scoreline was mostly due to excellent bowling and Harris loomed as an unlikely saviour. At the other end was Johnson. The late David Shepherd would have stood on one leg and wondered if there was too much money in cricket.

Anderson snaffled Johnson and Australia was looking like yesterday’s Christmas turkey. With all the trimmings! All out for 98 can only point to two things: A great bowling display by England or an abject surrender by Australia. All the wickets fell to catches behind the wicket, and all the batsmen except Clarke and Hughes got deliveries that were good to very good.

The mood among the crowd was sombre and the Ashes were looking safe in England’s keeping. The next forty overs of this first day would put Australia’s score in its proper perspective.

Australia bowled too short or too full. Strauss and Cook took full advantage and brought up the 50 partnership with as little fuss as Clint Eastwood’s ‘Dirty Harry’.

As England reached parity with all ten wickets intact, the Australian supporters started streaming out and the cicadas had given way to the Barmy Army and their eulogies. At close of play England was 0-157 and the Barmy Army was trumpeting victory.

When, at 6.10pm, a blonde leg-spinner came on at the Southern End, the MCG faithful would have been hoping for a miracle. The Melbourne Cricket Club had announced at lunchtime that Shane Warne would be the first of 10 statues to be erected in Yarra Park, which extends from the Members Gate 2.

The statue will be ready at the end of 2011. In the meantime, Australia’s hopes in this test look as soggy as wet concrete.