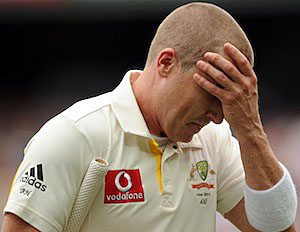 Australian keeper Brad Haddin walks back to the dressing rooms after getting out against England on day one of the fourth Ashes Test against England at the MCG in Melbourne, Sunday, Dec.26, 2010. (AAP Image/Joe Castro)

Peter Siddle started the second morning of the Boxing Day Test with purpose; bowling a menacing line and length. He dismissed Cook and Australia had a glimmer. But this glimmer was extinguished by a ruthless England batting display that was singular in its purpose. And by day’s end, the coffin was ready and only the corpse remained to be put in it.

Siddle could not sustain the excellence and Hilfenhaus was efficient without being threatening. Meanwhile, England ground out the runs and built on their lead. Harris was not used in the pre-lunch session and it seemed Ponting was saving him for the new ball. This was a case of being so far in front of the game that it was counter-productive. And as Geoff Lemon remarked to me at lunch, Harris knows how to use the old ball!

Australia took the second new ball after lunch and the conditions were as favourable as the first morning. The only difference being that Trott and Pietersen were well set. Siddle seamed one back into Pietersen’s pads and the finger was raised. The lead was 164 to England and Australia needed more wickets.

Harris was given four overs with the new ball and was unable to make the breakthrough. Ponting turned to Johnson and he struck with his second ball as he induced Collingwood to top-edge to Siddle on the fineleg fence. England had lost four wickets today for 114 runs and this highlighted Australia’s undisciplined bowling yesterday.

Johnson’s pace was too much for Bell and the three card trick worked again. Only three on the leg-side and Bell found Siddle running in from the fine-leg fence. Siddle had figured in all five wickets and was bringing some joy to the 60,000 crowd.

Like in any sporting endeavour when you are playing catch-up, every mistake is magnified. As the lead neared 200 the edges were now flying between the slips, and Ponting was forced to bring back his most defensive bowler, Hilfenhaus.

I thought to myself that this is when I would have re-introduced Smith. Ten minutes to go before tea and the England batsmen, Prior and Trott, in a holding pattern would have been perfect for the leggie. The hard new ball also would have helped.

Today Ponting was caught between attack and defence and neither was executed on cue. It makes no sense to attack with a garden gnome!

Harris was introduced half an hour after tea and had only three on the legside. The first ball was driven for four and the second pushed into the yawning gap in front of square for an easy two. Harris over corrected and banged the third in short outside off and Trott pummelled this over backward point for four.

Trott was trying his hardest to shut Australia out and succeeding. It was Trott that scored the Ashes sealing century on debut almost 18 months ago.

Ponting was now in all out defence mode and looking to restrict the damage. This ironically was good captaincy, but a lot of the previous decisions negated this good thinking. Clarke was introduced to peddle his no-name left- armers and looked as appealing as yesterday’s fish.

With the lead approaching 250, Watson had his hands on his hips. Hussey had his arms behind his back. Johnson’s hands were on his head and the resignation was palpable.

Trott and Prior ensured that there would be no coming back for Australia stretching the lead past 300 and three days still to play.

With half hour to play Australia’s fielders resembled a collection of teapots and statues in repose. Returns were being underarmed to the bowlers and the hits to the boundary were accepted with the same resignation as an interest raise rise. You may not like it, but there’s nothing you can do about it.

The Trott/Prior partnership ballooned past 150 and it was significant that Siddle was conspicuous by his silence. The silence of the cicadas!