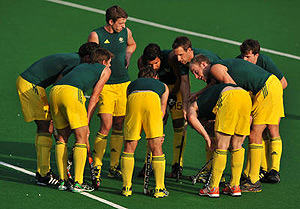 The Australian men's hockey team group into a huddle before taking a penalty corner against England. AAP Image/Paul Miller

Titian, the 16th century Italian painter, was known among his contempories as “The Sun Amidst Small Stars.” His paintings were ablaze with dramatic colours and the brush strokes were sweeping in their execution. If Hockey was a canvas, then the Kookaburras are the Renaissance men of sport.

The Kookaburras are everything our Australian cricket team is not. They are the 2010 World Champions. The 2010 Champions Trophy winners and the gold medalists from the Delhi Commonwealth games.

Ric Charlesworth, the coach, was named the AIS coach of the year for 2010; not for the first time either.Des Abbott. Eddie Ockenden and Jamie Dwyer were named in the IHF (International Hockey Federation) All Stars Team. Charlesworth was named one of two coaches for the All Stars team.

The Kookaburras are not professionally paid athletes.

The major sponsors are Asics and Kookaburra. There are no majors like the Banks, airlines or mining companies.

How big is the “Big Australian”? Which Bank, are we talking about, sport?

With only 144,000 registered participants it is the smallest of the major sporting codes. Yet it produces world champions. Jamie Dwyer was offered a cricket scholarship when 15 but chose hockey instead.

He is comfortable but by no means wealthy. He plays in the Netherlands league for Bloemendaal and in may this year move to Germany where he will play for Mannheim Hockey club. It is a gypsy lifestyle but this is his passion and winning a second Olympic Gold in London, 2012, is his dream. He will be 33 then and hopes to return to Australia and start a coaching clinic with his friend Mark Knowles.

In 2010, the Kookas won 31 of 36 games and the average winning margin was 3.6 goals. This is the equivalent of winning by an innings every time. The class of 2010 is every bit as good as Steve Waugh’s class of 2001. The Kookas have figured in every Olympic semifinal since 1976.

They have been ranked in the top three for nigh on two decades.

In Luke Doerner they have a defender as intimidating as “Cement” Gillespie. Jamie Dwyer is a magician like Mark Ella and is a risk-taker like Evil Kenievel. If he has a weakness, it is like Ella in his tackling. Defence is a foreign word to Jamie but he has enough strong men around him to make up for this.

This is what good teams do.

Charlesworth has ensured that the sum of the parts is greater than any individual. The transition from defence to attack. The isolation of the opposition’s attacking players and the judicious use of the interchange bench.

If you have not watched the Kookas play please do so at the earliest opportunity. This is one of Australia’s greatest sporting teams.

This Kookaburra team wins the big moments. They are calm in the eye of the storm. They have their own lightning and thunder.