The big winners and losers from the IPL auction 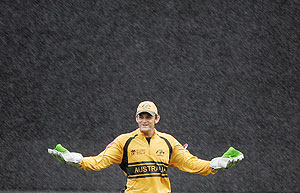 The IPL is a world away from the iron fences at Roseville Park and the white pickets at Waverley. It is a world where the owner of the Mumbai Indians, Mukesh Ambani has just built a mansion worth one billion US dollars. It is 27 storeys high and has three helipads and hundreds of rooms. He lives there with his wife, three children and a staff of 600.

This is a bit much for my middle-class sensibilities. To someone like him a team worth 20 million is a plaything. But at least his money is not tainted like Stanford’s.

James Sutherland is looking to make the KFC Big Bash a nice little revenue earner for Australian Cricket. It will never amount to much without Indian investors. Indian investors will not invest without a TV deal broadcasting into Indian lounges in prime-time. I am not sure if CA has worked out that matches would have to be played at 1am in the morning EST to make it attractive. Dream on Mr. Sutherland.

Other franchise owners have a penchant for Formula One teams and still others commission private yachts worth hundreds of millions.

The ten franchises had a total salary cap of 90 million dollars. Mumbai had retained four players including Tendulkar for half their salary cap. Chennai also retained Dhoni, Albie Morkel, Raina and Vijay.

Rajasthan retained Watson and Warne for a combined total of 3.1 million. Warne will probably get 1.8 and Watson 1.3. Dravid was also bought by Rajasthan for a bargain at $500,000. The big winner was Ross Taylor who was bought by the franchise for one million dollars. Why would he be interested in a Black Cap when he gets this for six weeks work?

Michael Hussey was bought for $425,000 by Dhoni’s team Chennai. His brother David was the Aussie in most demand and fetched 1.4 million from the Punjab franchise.

Cameron White the T20 captain was auctioned for a handsome $1.1. The “bad boy” of Australian cricket Symonds was snapped up by Mumbai for $850,000 and will have as his teammates both Harbhajan and Tendulkar. They can get up to millions of dollars worth of monkey business with the greenbacks.

So much for racial vilification and principles. It is all forgotten in the scent of money!

Adam Gilchrist ($900,000) will join David Hussey at Punjab and could end up captaining him. But David will have the bragging rights.

Shaun Marsh went for a reasonable figure of 400,000 and makes it three Aussies for Punjab.

David Warner at $750,000 joins Delhi and could form the most potent opening partnership in world cricket with Virender Sehwag. Sehwag was the only player retained by Delhi before the auction and may well be the highest paid in the league.

Warne’s franchise was outbid by Pune for Callum Ferguson and he went for $300,000 which was an accurate reflection on his current worth.

Aaron Finch was also bought by Delhi and gives them more firepower down the order. His price of $300,000 may well be the best bargain of the night.

Brett Lee went for a low $400000 to Kolkata and this is because of his recent injuries. All contracts are for two years and all the sums mentioned here are annual salaries.

James Hopes at $350,000 joined the Sehwag franchise and will perform whole-heartedly. Steven Smith went to Lawson’s team for $200,000 and Haddin joins Gambhir at Kolkata for $325,000. Tim Paine attracted $270,000 from Pune. Graham Manou failed to interest anyone.

Ryan Harris surprised by attracting a bid of $325,000 from Punjab and his new owners will be hoping he recovers in time.

The highest bids were for Gambhir (2.4 million) Yusuf Pathan (2.1mil) and both were bought by Kolkata. Irfan Pathan went for 1.9 million to Delhi and the Pathan family would be ecstatic as their father was from a very poor background.

Other major earners were Rohit Sharma (2 million to Mumbai) Robin Uttapha (2.1 million to Pune) Jayewardene (1.5 million) to the Lawson coached Kochi franchise and Kallis to the Kolkata mob for 1.1 million.

Sangakkara, the Sri Lanka captain, went to Deccan and only fetched 700,000(less than half) of his vice captain and less than the 950,000$ paid for Angelo Mathews. There may well be some friction in the Sri Lanka dressing room.

There were no bids for Mathew Prior, James Anderson and Luke Wright. Kevin Pietersen went for a surprisingly low 650,000 to Deccan but will be happy to play alongside Sangakkara.

Eoin Morgan goes to Kolkata for $350,000 and will have the Irish boys dreaming and the ECB frowning!

Bangladeshis would be ecstatic about Shakib Hasan fetching $425,000 but disappointed there was no bid for Tamim Iqbal who in my opinion is one of the most destructive batsmen in the Twenty20 format. The franchises missed a trick here.

Brian Lara, Gayle and Ganguly did not attract any bids. With Gayle it was because he would only be available for 2 weeks. Bravo went for a low $200,000 and would be regretting not signing the Windies board contract. He gambled and lost.

The two quickest men up for auction were Dale Steyn and Shaun Tait. These were the game changers and Steyn was the first to be auctioned. He went for 1.2 million dollars to Pietersen’s team, the Deccan Chargers.

Dirk Nannes was bought for $650,000 by Bangalore and was an attractive proposition as he is available for the duration of the IPL.

Lawson’s franchise Kochi was keen to buy Doug Bollinger and got into a bidding war with Dhoni’s Chennai Super Kings who won the battle. . “Bolly”, as he is called by the Indians, would have been happy with the $700,000 buy price and, in a perverse way, could be thanking the boffins at CA for sending him to South Africa for the Champions League.

Lawson’s franchise had money to spend and bought Murali for 1.1 million. Not bad for a 38-year-old. Good things happen to good people. Graeme Swann was up for auction immediately after Murali and surprise, surprise gets no bids at the reserve of $400,000.

The world’s best ranked spinner is unsold. The slave trade is a funny business!

Lawson also bid vigorously for Brad Hodge and at $425,000 was one of the best buys of the night. Hodge, along with David Hussey, should be in both of Australia’s limited overs sides.

Though to be fair the start of the English summer clashes with the IPL and this would account for the low bid for Pietersen and the no bids for Prior and Swann.

Piyush Chawla the Indian leggie who cannot make the Test team goes for $900,000 to Punjab.

Still on the spinners. Ashwin, uncapped at Test level but a strong performer in the few ODI’s he has played, went to Chennai for $850,000. A quickish and accurate off-spinner he will balance the attack of Morkel and Bollinger.

In another surprise, Mendis, the mystery spinner from Sri Lanka was unsold. Owners were looking for proven performers and the money paid was an indication of market worth. By this reasoning both David Hussey and Bollinger should be playing Tests for Australia.

Tait will be up for auction on Sunday but the implications for CA are clear. Every Australian cricketer will want a slice of the IPL action and the administrators have to balance the needs of all three forms. They have not shown sufficient nous to date and must realize that Twenty20 is a totally different mindset to the 50 overs and Tests.

Administrators should not try to cannibalise any of the forms. The IPL is a domestic competition and there is no need to play too many Twenty20 Internationals. The Big Bash should not be allowed to get any bigger and the move to city-based teams with foreign equity is a recipe for disaster. An expansion can only come at the cost of the Shield and we know this leads to a number five ranking. There will be less scope for Australian players to break into the IPL if Australia is a low ranked Test playing nation.

You just have to see the no-bids for players from Bangladesh, Zimbabwe and the West Indies to realize this marketing fact.

The best of India’s young test players like Pujara and Badrinath were bought in excess of $700,000. The best of Australia’s young hopefuls like Ferguson, Smith, Paine and Finch for less than half that. The market place does not lie.

Australians were admired for their work ethic and athleticism but the current state of Australian cricket is not what anyone in the IPL is enamoured of. And, least of all, the Australian public.

Shane Warne retired three years ago but yet remains Australia’s highest paid player in the IPL. Closely followed by David Hussey and Cameron White. Is it just a coincidence that all three are Victorians?

Following were the players bought for $1 million or more on the opening day of the two-day Indian Premier League (IPL) auction in Bangalore on Saturday (read as name, country, amount, team):

The Twenty20 tournament starts on April 8.

Note: India’s Sourav Ganguly, the West Indies’ Brian Lara and Chris Gayle, and England bowlers Graeme Swann and James Anderson were among unsold players on the opening day of the auction.