Why Roger Federer is a flawed genius 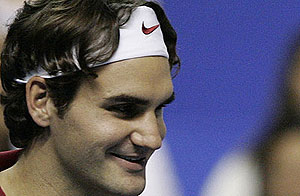 As a huge fan of Roger Federer, I regret having to write this article. Federer is the most talented player I have ever seen – my hero. His record would suggest that he is the greatest ever. However, he does not have one vital ingredient that most champions possess.

He is not a fighter. Unlike other recent greats, Sampras, Agassi and Nadal, Federer does not play his best tennis in tight matches. He is a front-runner who finds it hard to scrap and come from behind.

In his early career Federer was identified as someone with a huge amount of potential and extraordinary technical talent, but he was an easy beat. He was mentally flaky and at times he would appear to lose interest in matches when he fell behind on the scoreboard.

The best example of mental fragility in the young Federer was when Hewitt came back from two sets down to win in five and knock Switzerland out of the Davis Cup in 2003.

Federer was a late bloomer, but when he did bloom his game (always beautiful) went to the next level. Maturity combined with his pure shot production brought consistency to his game, and for a period he was virtually unbeatable.

His dominance in his first few years as number one was magnified by the fact that there was daylight between himself and the next rung of players. He played near flawless tennis to crush Lleyton Hewitt 6-0, 7-6, 6-0 in the 2004 US Open final and went through Roddick 6–2, 7–6(2), 6–4 in the 2005 Wimbledon final.

Federer got in the habit of winning easily. Some would say a good habit to have but a challenger was always going to emerge, someone who could push Federer and expose not just the weaknesses in his game (if any) but also the depths of his character.

The only person who provided any resistance in these years was a young Rafa on clay. In 2006 and 2007 Federer had the chance to hold all four majors by beating Rafa in the final of the French Open. He lost both times despite winning a set in each match and having several good opportunities. There were signs in these matches that the fragility of the young Federer still lingered although most people put it down to the Spanish bull being himself unbeatable on the red surface he had grown up on.

Since 2008 Federer’s dominance of men’s tennis has been eroded and I would suggest his mental weakness exposed. I realise that some people will find it a hard argument to accept – that a player with 16 Grand Slam titles to his name could be mentally soft. The evidence is mounting.

The match that most people describe as the best Grand Slam final of the modern era was perhaps Federer’s darkest hour. He had beaten Rafa in the two previous Wimbledon finals. Grass is Federer’s best surface and at that time was considered Rafa’s worst. It suited Federer for many reasons, primarily because he, unlike most of his contemporaries, could serve volley when he needed to. In fact, in his early years Federer quite often serve-volleyed on grass. It is a surface which rewards the dominant server who can come in and finish off the big points quickly. Sampras had been a master of it. Its low bounce also neutralised Rafa’s biggest weapon, his heavily top spun forehand.

The Fed took the first two sets 6-4, 6-4 and most people assumed he was on his way to yet another Wimbledon title. At the time we did not know that on the other side of the net was the toughest, most determined and fittest player the game has ever seen. In many ways the Spaniard is Federer’s mental antithesis.

Rafa ended up taking the match 9-7 in the fifth set. The match should have been Federer’s. He had chances to beat Rafa, as he has in all their big clashes. The common theme being that Rafa concentrates better and attacks more on the big points. Many believe Federer would have won this match if he had the courage to serve volley deep into the fifth set.

It was the second time Roger had squandered a two-sets-to-love lead. It’s the type of loss that you don’t recover from quickly, nor your rivals forget. In 2009 Roger again lost to Nadal in five sets in the Australian open final. It is a match that will be remembered for the uncontrollable tears that ran down Federer’s face when he was presented the runner’s up plate by his idle Rod Laver. We can only speculate why Federer wept that night. The tears themselves were revealing. Federer is a gentleman in the true sense of that word. If he was ruthless like Sampras he would have been the complete player.

In the last eighteen months it has not only been Rafa who has had some big wins over Federer at the Grand Slams. Novak Djokovich beat him in last year’s US Open semi after surviving a match point. Federer fell to the wiry young Serb again on Thursday night, this time more meekly.

Federer can be a frustrating man to support. There is a palpable difference in intensity between he and Nadal or Djokovich prior to big points. You can see his opponents concentrating yet harder and stealing themselves for what is to come, emotion pouring out of every pore, whereas the Swiss master stays calm… too calm.

Federer is not good at arresting the momentum when matches swing against him. Plan A is that he is too talented for his opponent and there is no Plan B. His unwillingness to use his net play and variety against his younger more powerful opponents is curious at times. His single handed backhand (a thing of great beauty, like an antique) has become a weakness.

Federer’s impeccable CV will be complete if he can beat Rafa in hard fought five set Grand Slam final, but his time is running out.