Phil Gould's argument nothing but a sham 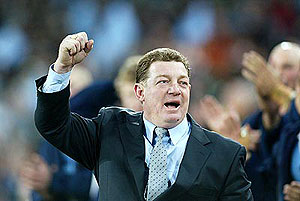 In Sunday’s Sydney Morning Herald, NRL big man Phil Gould mounted his case for poker machines. It was one of the most bungled attempts at assembling an argument that you’ll ever see, like stapling a bunch of fish together and calling it a mermaid.

The drop of revenue that would come with tighter controls on players, he said, would lead to a dramatic end-game just a few shades shy of the apocalypse.

Within five paragraphs he upgraded the job loss to “tens of thousands”. That’s some spike.

It’s worth noting that words like ‘undoubtedly’ when predicting the future are notoriously risky. Even the Magic 8 Ball just said “All signs point to yes.”

Then Gould pulled out the ultimate scare card: “I’m sure the NRL will survive. A few of the Sydney-based clubs might not be so lucky. Your favourite team could be the one to disappear.”

Thing is, it sounded like Gould was singing from a very familiar hymn sheet.

The closer you looked, the more closely his article resembled a neat list of the arguments made by Clubs Australia in their campaign against the new laws.

If you need reminding, Clubs Australia is the innocuous-sounding body representing the nation’s poker machine venues. Their vested interest is absolute.

It did make you wonder what Gould’s relationship with Clubs Australia, or with an individual club, might be.

Then there it was. “I have been involved in the club industry all my working life. I worked directly in the poker machine industry for 12 years.”

Now, I don’t know anything about Gould’s current financial affairs. But when a guy starts talking about “poker machine investment as buying relaxation time or as part of a social entertainment option to share with friends,” you can only assume that he’s still on the industry teat somewhere along the line.

The staggering thing, for an article in a reputable paper, was Gould’s willingness to rely solely on figures from Clubs Australia.

“Even the federal government admits these reforms will reduce expenditure on poker machines by some 30 per cent – Clubs Australia suggests the real figure will be somewhere between 40 per cent and 50 per cent,” he said

And then, “To put all this in perspective, Clubs Australia maintains that there are about 60,000 problem gamblers in Australia and 5 million individuals who play the pokies annually.”

In contrast, the Productivity Commission – an independent, non-party organisation – estimated there were up to 160,000 problem gamblers, and 350,000 at-risk gamblers.

Not to mention that at no point do we hear where the Clubs Australia numbers might come from, and at no point is any genuine evidence invoked.

“The NRL is being funded by ‘family misery’ and ‘pokie addicts.’ What a statement! I don’t need to point out the inaccuracies and totally misinformed nature of these outlandish assertions.”

Amazing argument, Phil. You just have to say that something is not true, and it magically becomes so. Using lots of adjectives seals the deal.

Now for my next trick, I’ll make my life savings disappear.

Unfortunately for Gould, the Productivity Commission estimates that 40 percent of all pokies revenue is lost by problem gamblers. If the NRL is as dependent on clubs as he claims, then mathematically Macklin’s assertion adds up.

The “poorly researched reforms” are based on intensive research by specialists in the field. Naturally, a retired rugby league player who hasn’t even read the report is entirely qualified to dismiss it entirely.

I mean, Andrew Bolt knows more than a globe’s worth of climate scientists, so that’s just standard procedure.

“The problem of this proposed legislation,” said an outraged Gould, “is that it treats every potential poker machine player as a ‘problem gambler’.”

Just as with warnings and plain packaging on cigarette boxes, it’s not really designed to stop smokers from smoking. They’ve already cast their vote.

It’s designed to stop new smokers from being created.

“The people of Australia need to understand what is going on here,” said Gould in his closing flourish. “We all know the Gillard government is desperate and out of control.”

So, we need to understand what we all already know. Is that right, Phil?

There is no better indication of a rhetorical impostor than phrases like “we all know.” It’s an indicator of no research and no expertise, the dressing up of a personal prejudice with the air of mass acceptance.

This was not an independent article reflecting a considered opinion. It was a Clubs Australia press release with a relevant personality’s name pencilled in at the top.

The Sydney Morning Herald should be embarrassed to have run it.