The Roar
18th July, 2011
4
Join the conversation
Advertisement
Write for The Roar

Barry Hall has paid tribute to the Western Bulldogs for taking a punt on him as he announced his retirement from the AFL at the end of the current season.

“I want to thank the footy club … they gave me a chance when probably no other club would,” said 34-year-old Hall at a media conference on Tuesday.

“They put their head on the chopping block, they had their knockers and doubters.

“But they put a bit of faith in me that I could change my ways and do good for this football club and I’m glad it’s all worked out.”

Hall has been in decent form despite his advancing years, kicking nine goals in his past two games, including five in Sunday’s loss to North Melbourne.

However he will be remembered just as much for his fierce competitiveness which boiled over at times, resulting in a number of on-field indiscretions and suspensions.

Most notable of those was his seven-week ban for striking West Coast’s Brent Staker in 2008.

He retired the following year after incurring another suspension, before being thrown a lifeline in late 2009 by the Bulldogs, with whom he signed a two-year contract.

A 2005 premiership co-captain with Sydney, Hall is the first player to have kicked more than 100 goals for three different clubs and has kicked 715 in total to be 19th on the all-time list.

Hall is certain to be the centre of attention when the Bulldogs play the Swans at the SCG on Saturday.

Seconds after Isabel Huntington clutched her right knee in agony, she had the grimly resigned look of someone who knows what it meant. 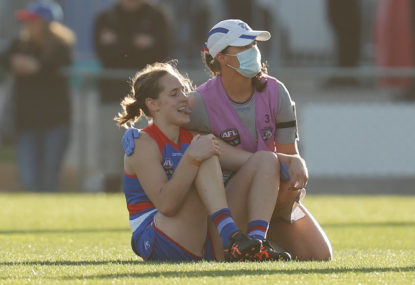 While the Western Bulldogs list was much shorter than Melbourne’s (due in part to 28 years less VFL/AFL history) it had a number of nicknames that deserved to be on the expanded list of 24. 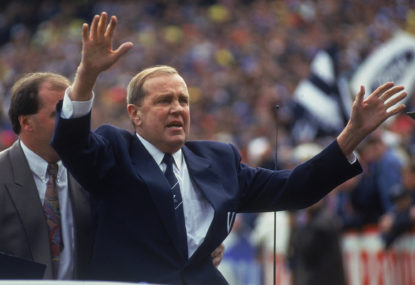 Western Bulldogs star Bailey Smith has taken indefinite leave from the AFL club for personal reasons and to deal with private family matters. 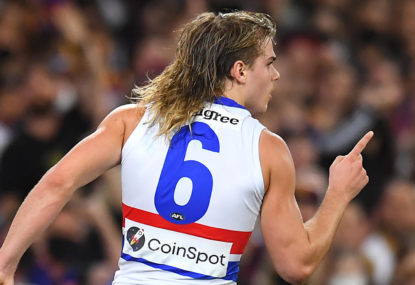 Western Bulldogs AFLW players and staff have been sent into isolation after a member of the program tested positive to COVID-19.