Damage of the dollar for Richmond

After 17 rounds, Richmond sits on five wins and a draw from its 16 matches. Since a highly acclaimed victory over the Bombers in the Dreamtime match in round nine, the Tigers have dropped six of their last seven, with the only win coming over Brisbane.

In the six losses, they’ve lost to finals contenders Sydney, Melbourne and Essendon as well as top four aspirants Carlton. All respectable enough, although the nature of one or two of those losses was disheartening.

The other two losses have come against the bottom two teams on the ladder, Port Adelaide, a match in Darwin, and Gold Coast in Cairns. Yes, the two matches the Tigers sold may have earned them $500,000 each, but they cost them eight premiership points. Quite simply, if played at the MCG, Richmond wins both those games and sits equal ninth, only a game out of the eight.

Richmond isn’t the first or last club to sell games interstate in a bid to raise some much needed funds, and avoid losing money on games with poor attendances. In fact, in 2011 alone, Hawthorn (four to Launceston), Melbourne (one to Darwin) and the Western Bulldogs (one to Canberra) have all sold home matches.

In 2012, North Melbourne will start a three-year deal to play two “home” games per year in Hobart, the Dogs will return for a “home” match in Darwin, and in the biggest deal of all, the AFL’s newest club, Greater Western Sydney Giants have an agreement to play three premiership matches and one preseason match in Canberra every year for the next 10 years. That deal will net them $23 million.

AFL is big business, there is no doubt about that. And in the time of poor returns from expensive stadiums, in some instances clubs lose hundreds of thousands of dollars for home games when a really poor crowd attends. The selling off of those games not only avoids clubs the loss from a really poor attendance, it also allows them to take the cash on offer from smaller markets that don’t have their own AFL team.

The way the Hawks have achieved this must be the envy of all clubs in the league with financial problems. Aurora Stadium in Launceston has become a fortress for the Hawks. They have more of a traditional home ground advantage at Aurora than they do at a big shared home stadium like the MCG.

This model of a true home away from home that also fills the coffers is the blueprint that all clubs would aim to follow when selling off those low drawing matches. North Melbourne and GWS have gone a long way to doing that by securing a venue that is no further for them to travel than their opponents, and in taking exclusivity of a venue, they have a chance to make it their own.

The problem with the deals that Richmond, Melbourne and the Bulldogs have is that they have no advantage over their opponents in playing these grounds. In fact, all three this season gave up an advantage. In travelling to Cairns instead of Melbourne to play against Richmond, the Gold Coast wouldn’t have believed their luck. Similar climate to what they are used to, and much closer to home.

Similarly, the Sydney Swans when they travelled to Canberra to play the Bulldogs. As for the Darwin games, despite it not being their home match and making no money from it, Port Adelaide have become the Darwin specialists in recent seasons and would be much more used to the ground, the travel and the conditions than either of their opponents.

Port has played six matches in Darwin since the start of the 2008 season. That sits quite favourably in comparison with Bulldogs and Melbourne who have played two each, and Richmond who ventured to Darwin for the first time this season.

So at what point does the dollar become more important than the points? Or is the AFL to blame in allowing teams to have an extra match in their home state? Surely West Coast or Fremantle would love to play 13 games a season in WA, a luxury afforded Gold Coast, and Sydney although Canberra is in the ACT. What if Richmond sold their home game against Fremantle to Cairns? Thus nullifying the advantage given to the Suns.

What the two losses to Richmond also highlights, beyond the financial state of despair that some of our clubs sit in despite the AFL being a non-profit organisation fresh off signing a $1.2 billion dollar broadcast deal, and with a CEO who last year pocketed an annual salary of $2.1 million dollars, is that in an effort to avoid a heavy loss against a low drawing rival, it is costing clubs games of football, which in turn costs them so much more.

If those two games were played at the MCG and Richmond was able to make no profit, but take the four premiership points on offer in both matches and that led to a finals appearance, would they make more than the $1 million through finals gate receipts, a spike in 2012 memberships, more merchandise and happier sponsors when the time comes to renew those deals?

That’s the million dollar question that the yellow and black army want answered. 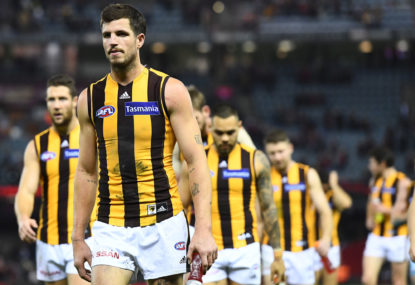