Ongoing negotiations is a worry for NBL 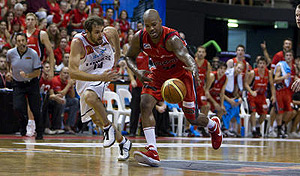 Galen Young for the Wildcats moves into attach against Glen Saville for the Hawks. AAP Image/Tony McDonough

News arose this week that the NBL is still in discussions with the Ten network negotiators about the status of their NBL broadcasting for season 2011-12.

Up until these negotiations became public, it was believed that Ten was contractually obligated to show at least three live games a week until the completion of the 2014-15 season, on either Ten or its digital channel, ONE.

It’s now believed that a secret clause is contained in the NBL agreement, which is said to allow the live games to instead be broadcast “near-live” (within three hours of tip-off) – presumably this clause is invoked due to the change in focus of ONE.

The problem for fans, and those not yet attracted to the league, is that Ten, once thought to be a key saviour of Australian basketball, is now stabbing the NBL and basketball in Australia right in heart.

Without live television coverage this season the league will be hamstrung, unable to properly capitalise on the introduction of Patty Mills and (possibly) Andrew Bogut to the league.

Whereas there was a 298 percent rise in television viewership last year, it’s now likely that we will see a contraction of viewership.

Tuning out on the television will mean tuning out across the whole league. For those potential fans that will never be exposed to the league and for those fans that once turned off but may have otherwise returned, this is a big hit.

The impact will be felt most of all though by the diehard fans. With no internet streaming available and no live TV, they will be forced to watch box scores and twitter feeds for live game info.

There is still a glimmer of hope remaining, though. The negotiations are on-going and there is talk that ONE may show one live game and two delayed each round.

Even if this compromise does shape out, it’s still going to mean a massive blow for the sport of basketball in this country.

For those interested in helping the fans plight, you can put your name to a petition here, to show the people at Ten your support for live NBL coverage in 2011-12.