Why the two Test series is good for Test cricket

New Zealand defeating Australia was the best result for Test cricket. Before you accuse me of counting one too many sheep in my sleep or jumping on the bandwagon of New Zealand sport after their Rugby World Cup success, here me out.

The one all series result against Australia is the slap in the face the ICC needs regarding the scheduling of Test cricket series.

This is the second series in a row tied at one win each with no third Test scheduled to determine a winner.

Whenever the ICC talks about Test cricket, its modus operandi has been to give meaning to Test series’ around the world. They created a Test ranking system where results from series would determine your strength as a Test nation. With all the one-all tied series, can we presume there is some convoluted Duckworth-Lewis equation to determine who gets the most points out towards their ranking?

The ICC has flirted with the idea of a world Test championship for some time. This recently was put on hold again due to scheduling difficulties. The schedule, you see, is the problem here.

The need to schedule a triangular one day international series – that no one will ever remember – between Australia, Sri Lanka and India in February is costing Australia an extra Test against the West Indies in March.

You get the picture; it’s that darn schedule. There simply isn’t enough room for m0ore Test matches when there are so many other matches to fit in.

Which brings us back full circle to the issue the ICC were trying to resolve with Test cricket and series over a decade ago. Do away with the meaningless matches that an uninterested public does not care for and put in place matches of significance. Test series must be a minimum of three matches. Anything less is open to public and player apathy and the potential for illegal bookmakers to continually infiltrate the system.

We the public agree with this approach – always have done. Today’s win by New Zealand over Australia and the recent, brilliant win by Australia in the second Test against South Africa will stand the test of time as great matches. The climax at the end of both is the drama about cricket that we love and cannot be replicated in the shorter forms of the game.

New Zealand will be celebrating this test win more than any one day triumph in the past few years. The Black Caps won their first Test in Australia since a moustachioed Sir Richard Hadlee managed to terrorise us in Perth in the mid ’80s, or to roll out the first early excuse, their first win here since the last time Australian cricket was in a rebuilding phase.

So what do the public want? Eliminate meaningless cricket. That means no meaningless T20 internationals. Twenty-20 cricket should be a domestic form of cricket only, with perhaps an international World Cup once every four years.

Provide every opportunity for Test cricket to succeed. Series need to be able determine a winner, and importantly ticket prices need to be accessible. Why charge $70 enrty to get into Bellerive Oval and get a few thousand in attendance when you could charge $20 dollars and have a sell out?

Finally, let’s say goodbye to one day international cricket. It’s a big call but let’s hope the big bash is a success this summer. Cricket Australia would be better off telling the ICC they would rather invest money into getting big international players playing their domestic Twenty-20 tournament to large crowds than playing a triangular one day international series that no one goes to or will care about in two years time, let alone next season.

We, the public, hear constantly that there is so much cricket being played. This is why half the Australian team is in the infirmary at present.

The Indian opener came out firing, with Kohli and Iyer following as their side cruised to a 7 wicket win.

Even by the Heat’s standards, this was gloriously bad. 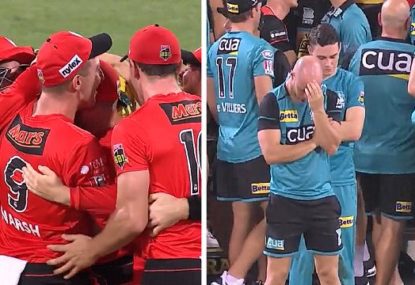