Now they have an AFL elimination final in Melbourne, Geelong coach Chris Scott admits it is a significant boost to their September chances.

The Cats were outstanding at home on Saturday, kicking eight unanswered goals in the second half on the way to a 34-point win over Sydney.

While the 17.10 (112) to 11.12 (78) result ensured Geelong will host next weekend’s final, Sydney lost second spot to Adelaide and will have to travel to AAMI Stadium for a qualifying final.

Over the past few weeks, Scott has repeatedly said that Geelong would not mind where they played in the finals.

But as the defending premiers try to become the first team outside the top four to win the flag since the current system was introduced in 2000, every little bit will help.

“It matters – if we’d lost today, I’d probably be trying to convince you that it doesn’t matter too much,” Scott said.

“One of the difficulties in finishing outside the top four and going all the way is there’s a likelihood you would need to travel multiple weeks.

“So the first game in Melbourne helps us.

“But if we want to go all the way – and we think we’re capable of it – we’re going to have beat a really good team interstate at some stage, I would imagine.”

Scott was also unusually candid when asked about star forward Paul Chapman, one of their best with three goals, who was reported in the first quarter for striking Ben McGlynn.

The reflex response for coaches post-match when asked about reports is they did not see the incident and so cannot comment.

Asked if he had concerns, Scott replied: “not from me – I’ve had a look at the vision quite closely.

“That’s just me, though.

“When I’ve seen it, I’m honest – if I was worried, I just wouldn’t have looked.”

The Cats effectively beat Sydney at their own game.

At halftime, the Swans led the contested possession count – the core of their game – by one.

By the final siren, Geelong led that statistic by 20.

Geelong will go into the finals having won six out of their past seven matches.

Another bonus was the successful return of ruckman Nathan Vardy, who played his first game this season after recovering from a long-term hip injury.

“Vardy is a fantastic story – we’ll try not to get too excited about the way he played today, but it’s going to be difficult,” Scott said.

Those players should return next weekend and coach John Longmire remains upbeat about their finals hopes.

“If someone had asked me at the start of the year ‘if you finished top four, would you take it?’, most people would probably tend to agree we would have taken it,” Longmire said.

The Cats have dawdled out of the gates in 2021.

Geelong have survived an AFL thriller for the second week in a row, holding off rivals Hawthorn by five points in a desperate finish at the MCG.

The AFL has given Geelong coach Chris Scott a $10,000 suspended fine for his quarter time confrontation with Brisbane players during last Friday night’s game.

The AFL is dealing with more coronavirus complications as the Brisbane Lions face an uncertain wait to see if they can return to Queensland for their Easter Thursday clash with Collingwood. 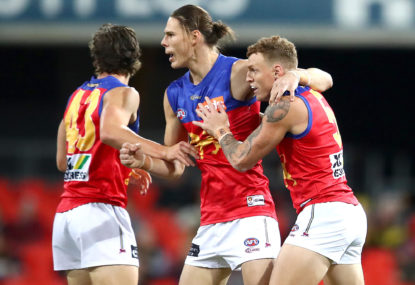