We have back to back heavyweights with the ‘M’ Team looking every bit as strong as the ‘L’ Team (noting there are more ‘M’s who have played Test cricket than any other letter):

Not really any weaknesses except perhaps lacking an absolutely great batsman. Interestingly, the batting line-up seems full of batsmen with very high career peaks which to some extent hide long periods of modest performance.

But with Miller (First Class batting average of 49) and Marsh at seven and eight the batting doesn’t lack depth.

The bowling is, of course, stunning with Macartney, Mitchell or McCabe to add extra overs if needed.

Some more info on the members of the team which is a clear challenger for the title:

Mitchell’s overall stats are impressive enough. As opener he was quite brilliant – 2390 runs at 57.

It is for this reason that he was a fixture in the South African side either side of WWII and only Dudley Nourse rivaled him as the finest South African batsman of the era.

When he retired he held the South African runs record and was still good enough to average over 50 on tour in his final series (aged 40) against a strong England side. He is also the only player to have scored a 99 in his final Test.

Australia’s oldest living Test cricketer, is also the opener for the Team of the Century as well as regularly been chosen in the various ‘Bradman’s Best’ teams.

However, like his fellow surviving ‘Invincible’ Neil Harvey, Morris seems to be one of those players who built up a big reputation early in his career and remained good enough for the rest of his career to maintain it.

Quite a number of those Tests involved Alec Bedser, who by then had seemingly worked Morris out so comprehensively he became known as ‘Bedser’s Bunny’.

The ‘Governor-General’ was Australia’s leading batsman between Trumper and Bradman, with Bradman himself intimating that, as a 12-year-old, seeing Macartney’s majestic 170 at the SCG against England inspired him to become a cricketer.

Amazingly, his early Test career was sustained by his bowling, and his 11/85 at Headingley in 1909 effectively won the Ashes.

But it was at that same ground 17 years later, as a 40-year-old, that Macartney cemented himself in cricket legend. In that match, on his way to 151, he became just the second player to score 100 before lunch on the first day of a Test (only four have ever done it).

In between, on the 1921 Ashes tour, he scored 345 runs in a single day against Nottinghamshire, a First Class record that stood until Brian Lara beat it on his way to 501*.

Another who had a spectacular half to his career, although in May’s case it was the 33 Tests he played from his first Test as England captain, aged 26, against South Africa in 1955.

Until then, he had struggled to put strings of big scores together (notwithstanding his 138 on debut) although never had a big run of failures either.

However, in those 33 Tests, he scored 2720 runs at 60, before having a poor final two series and retiring at the age of 31 due to poor health.

In all he captained his country for nearly two thirds of his career and only the great Richie Benaud beat him in a series.

It was about halfway through that run of 33 Tests that he achieved his highest ICC Batting rating of 941, which is the fifth-highest ever, and a massive 50 points higher than any other player with a sub-50 Test average.

Perhaps more than any batsman, McCabe lived in the shadow of Bradman. So much so that of the six Tests he played in his career without Bradman in the team, he scored centuries in three of them (and only managed three more in his 33 other Tests).

During that innings Bradman told his teammates to come out of the dressing room and watch “as you’ll never see anything like it again,” and later told McCabe “if I could play an innings like that I’d be a proud man.”

The Kepler Wessels of the Alphabetical Teams project – halfway through his career he would have played for the Y Team.

As it is, he still gets into the immensely strong M Team although it must be said his record isn’t as impressive as it looks. In fact, take away his purplest of purple patches in 2006 where he scored scored nine tons in eighteen innings, his career average falls to a good, but not great, 45.

Moreover, his average against both Australia and South Africa – the two strongest bowling sides of his era – is less than 30 with a solitary century.

But you just had to watch the guy bat to see that he was a high quality player who deserves his spot on this team.

The few words I have to allocate to a bio on Miller won’t remotely do him justice. Suffice to say he lived the sort of life that most of us (blokes) would probably have wanted to live.

In a cricket sense, I’ve always felt that his batting was underappreciated given his First Class average of 49 and his well known distaste for batting for the sake of it.

Like Morris, Miller was picked in the Australian Team of the Century and his selection as vice-captain of that team gets him the captaincy gig here.

Together with his best mate Dennis Lillee and Greg Chappell, Marsh was one of the ‘Big 3’ of Australian cricket of the 70s and early 80s.

Naturally competitive yet scrupulously fair, he thrived under the captaincy of Ian Chappell and as keeper for the lethal Lillee-Thompson attack.

Early in his career he was considered a top order batsman. Indeed he played purely as a batsman on his First Class debut in 1968 against the touring West Indies, scoring 0 and 104.

His Test debut was predominantly because of his batting ability, but he credits watching the great Alan Knott during that series as showing him how much work he needed to do as a keeper.

Ultimately he became one of the greats and retired the world record holder. His 95 catches off Lillee are still a record for a bowler-keeper combination.

‘Maco’ was arguably the best fast bowler ever and inevitably in most people’s all time XIs.

Even among the fast bowling pantheon that was the 80s Windies bowling attack he was the undisputed Zeus.

Smart, fast, skilful, aggressive – he literally had it all. And yet off the field he was widely admired for his leadership, humility and willingness to pass on his knowledge, including to the likes of Shaun Pollock.

Tragically, he passed away at the age of 41 from colon cancer not long after the 1999 World Cup. Fellow Barbadian legend Wes Hall presided over Marshall’s funeral ceremony.

Through little fault of his own, Murali is probably the most controversial cricketer ever.

The issues about his action are well known, as is his career total of exactly 800 wickets (and his equally amazing 67 five fors).

A couple of lesser known snippets: Murali went eight years (from 1997 to 2005) without playing against Sachin Tendulkar; he never played in a series longer than three Tests; he played more matches against Zimbabwe than he did against Australia; and his average in Australia for Sri Lanka is over 100.

Still, the world will probably never see a wicket-taking machine like him ever again.

With his skinny frame, bowl haircut and lack of extreme pace, McGrath didn’t exactly fit the fearsome fast bowler identikit. Hell, even his nickname of ‘pigeon’ is a just a little bit wimpy.

Yet taking wickets, especially those of high quality batsmen was something that he did as well as any fast bowler to have played the game.

His ‘most victims’ list starts with Mike Atherton (who he dismissed a record 19 times) and Brian Lara with 15. The first bowler on that list – Shoaib Akhtar – is 16th with five dismissals.

So as far as records go, it is distinctly unpadded with cheap wickets.

He and Warne are arguably the greatest bowling pair in Test history.

Australia didn’t suffer a loss in the last 35 Tests they played together – indeed they only suffered three losses together after 1999 and in fact didn’t lose a single match at home in their last 10 years. 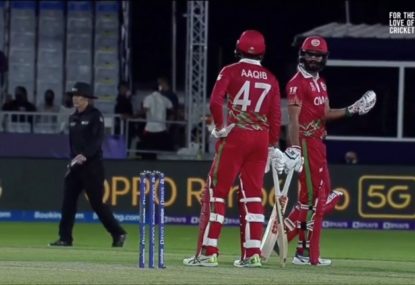 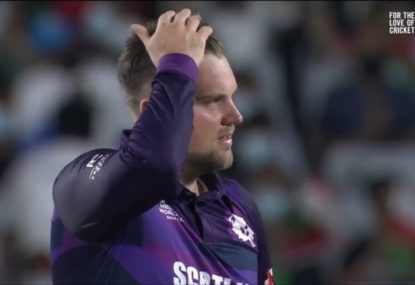