We’ve passed the first phase of this series – the songs that genuinely annoy me start to finish. The final cluster of tunes will be the ones that get me helplessly singing along, despite who I was rooting for during the game.

Of course, there are the ones in-between – a mixture of ones that hold some sort of fascination for me while being sort of crummy, and the ones that are just dull. Which brings us to ‘Sons of the West’.

You don’t automatically get points for being a Victorian club and having your song in that ‘classic’ register.

In some cases where the tunes are more similar it might even work against you, with your club’s tune struggling to break out from the clutter of the rest, as it does here.

I have been told that Footscray’s ‘Sons of the ‘Scray’ may be in the oldest five club songs, but it was outdone by others before and after.

It just doesn’t feel great enough; not that interesting or grand enough.

But then again, it’s not that bad. Just another song. It starts, plods along, then wraps up.

The lyrics are fine, but they just seem to slowly flow out, like the singers themselves are uninspired. If you can’t hear what I mean, listen to the Footscray one incomparison – in that case the singers, singing a nearly identical tune, seem pumped up.

It’s just little things, like a beat held slightly longer here, or an extra syllable added for pacing, but it serves as some sort of audible metaphor for on-field commitment and determination.

In saying that, Footscray’s wasn’t so much better that the their version would have made it any higher than #14.

Perhaps they would’ve, but it just goes to show that if, say, Tassie ever got a club, there are some key points to check off the list when composing a song.

Number one is enthusiasm, as the lack of it and void of cheer and spectacle in ‘Sons of the West’ does nothing for me.

It’s based on an old sea shanty, so I can only assume that the entire ship’s ration of rum must have been sculled to make this sound interesting enough to be passed down the centuries to the unsuspecting ears of the FFC. 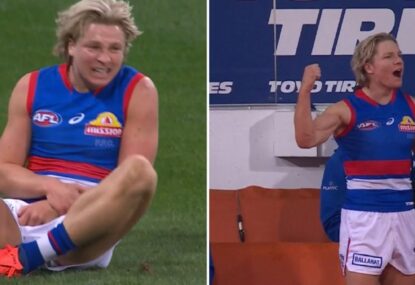