Savour the moments in September

“It was like death. Closest thing to dyin’ that I know of.” – Muhammad Ali after the Thrilla in Manila fight with Joe Frazier, October 1, 1975

The crash of bodies like two trains headed for damnation. Blood flows from the brow of a wounded warrior. Mere mortals put their head in places where demons fear to tread.

While many loath to compare the combat of football to war, the same superlatives apply.

Moving heaven and earth to make the final dash forward, backing your mates and never giving up.

These superlatives have never been more consistent, and they have never rung truer than in September. The best month of the year. The sun makes it first appearance for months, and titanic struggles are but the norm.

But in the realm of VFL-AFL, September translates itself into greatness.

Where merely serviceable players become household names. Fred Stafford, Neil Crompton, Ted Hopkins, Paul Dear and Shane Ellen and a host of others wrote themselves into footy folklore, while legends had their reputations enhanced on the big stage that is September.

It is the month where blood, sweat and tears are all shed in equal doses.

For me, ironically my favourite September memory did not involve the side I support. In fact, oddly enough, no match even occurred on that day. It was Sunday, September 30, 2007. The day after Geelong’s historic 119-point thumping of Port Adelaide.

Having grown up a Geelong supporter, and ensconced in a family full of lifelong Geelong supporters, I got to experience first hand just what a premiership means to people who have yearned for it for a generation.

My Eagles had secured their third premiership exactly a year before, and while my family saw my joy that year, I was fortunate enough to be at Kardinia Park for the celebrations, and to see the looks on their faces.

But it was more than just a mere celebration for some. For my beloved Nan, at that stage (and still is) the world’s most active 82-year-old, it was a celebration of something she never thought she would see again.

For my father’s family, 1963 was a tough year. Dad lost his father suddenly in February that year, and September produced Geelong’s last premiership for 44 years. Dad was too young to remember either event, thus robbing him of the saddest and the happiest day of his young life.

For the Geelong faithful, and for my family, it bookended 44 tough years, through sadness, joy, elation and desolation.

Five grand final defeats, four of which Dad saw first hand. 2007 would be my brother’s first grand final, and the game was over by half time!

That, for me, was the first indicator that this was more than just a football match. We met a man down at Kardinia Park with whom we shared a mutual friend.

He was riddled with cancer, and my understanding was that time was running out. As the siren sounded at the MCG, it was like his final rites were being read.

He could pass on to a greater plane content that his beloved Cats had got up in the big one. I never knew what came of him, but if he did pass on, the sweet taste of victory would surely have been a tonic of the gods.

To the disinterested observer, yes, it is just a football game. A day where cracking a coldie with breakfast is almost compulsory.

But it was that day in 2007 which opened my eyes up to what the AFL grand final is about for the diehard supporter.

Never take the team’s success for granted. On the field, it is a triumph of the human spirit, of toughness and of game plan, but for the invested supporter, not much can separate you from indescribable ecstasy and soul-shattering defeat.

Looking back on 2006, I probably took the Eagles win for granted.

With a midfield to rival the best of the decade, a part of me expected success. There was talk of a dynasty, and while the off-field issues took over the West Coast culture, a premiership for the Eagles is still a long way away.

This, even after the heartbreak of 2005 which saw me break down in a roadhouse in Dongara, as leaping Leo Barry lived up to his reputation.

But as I re-watch the last four minutes of that stirring win in 2006, I have come to savour the moment much more, knowing that many people go through their life without seeing their side raise the premiership cup.

Not many Western Bulldogs/Footscray supporters wouldn’t even know who Jack Collins was, let alone be around to witness his seven-goal haul in the 1954 grand final against future powerhouse Melbourne.

My uncle saw six Melbourne premierships before he reached his teens. He has not seen one since.

Old-time St Kilda supporters still marvel at the efforts of Kevin ‘Cowboy’ Neale in 1966, bagging five in a low-scoring contest. Five grand finals later, including two decided by 12 points or less and one draw for good measure, the Saints trophy cabinet contains one solitary cup.

And the premiership drought for those at Lake Oval and later the SCG spanned whole generations.

This Saturday, Hawthorn fans will be hoping for an 11th premiership in just over half a century.

The idea of Hawthorn as a successful side must have been foreign to those who once braved the winter chill to support the Mayblooms at Glenferrie throughout the dark era of the 1930s.

The smell of freshly cut grass will bring a new sensation and a different meaning for Fremantle supporters, as they chase the taste of something that has eluded them for nearly 20 years, and conversely prepare for the one ship they have desperately wanted to dock in Fremantle Harbour: the premiership.

The Hawks last tasted success in 2008, and just like West Coast in 2006, the talk of dynasties due to their young list has haunted them just as much as the Kennett Curse had taunted them.

Fremantle can shrug off years of mediocrity and finally find themselves a place at the VFL/AFL table, and it is much-deserved after 19 years in purgatory.

But whoever salutes on the last Saturday in September, there is but one reminder for the diehard supporters young and old. Savour the moment but do not take it for granted.

It may never come again.

Richmond may have suffered another significant blow to their stuttering AFL premiership defence after Shane Edwards limped off with an apparent ankle injury late in the 63-point thrashing from Geelong.

Rule number one of footy: you don’t pinch the big full-forward’s marks! 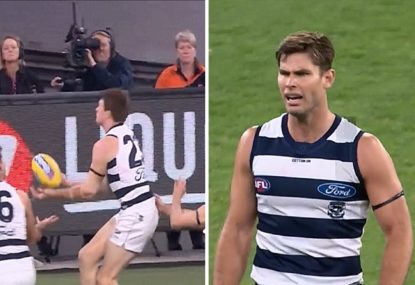 Have we just seen the Mark of the Year? 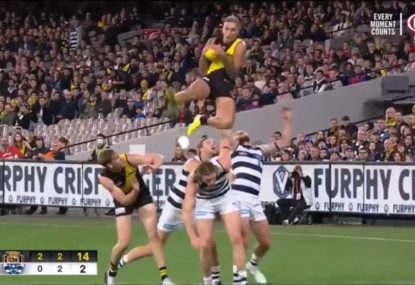 Have we just seen the Mark of the Year?

What better way to kick off another weekend of footy than with a mouth-watering grand final rematch?

West Coast coach Adam Simpson insists the Eagles are owning their “weak” AFL loss to Geelong and ready to emerge from Perth’s lockdown.

West Coast haven’t won at Geelong’s home fortress since 2006 and their growing injury list means they’ll face a battle to end that hoodoo this Saturday.