Reviewing the impact of Twenty20 on one day cricket

Hearing Glenn McGrath comment during Sunday’s Ryobi cup match between the Blues and the Bushrangers, “Twenty20 cricket has changed one day cricket,” prompted one to reflect.

How has the game of one day cricket changed over the past 15 to 20 years?

Well, it has in a multitude of ways.

If we cast our minds back to the mid to late 1990s, an era that coincided with the beginning of Australian domination at international level, 50 over cricket was at its zenith.

Contests were fiercely contested between every Test playing nation, including Zimbabwe, tri-series tournaments were globally abound, stadiums were packed and duels between bat and ball were notably even.

Who remembers the Carlton and United series of the 1996/97 and 1997/98 seasons? What riveting spectacles they were.

Some may even assert these were the highlight of the respective summers, supplanting the slightly one-sided Test matches that preceded them.

But then again, these cries generally originate from those with less of a genuine interest in cricket and more of a thirst for spectacular entertainment.

This market has now been snatched by the T20 format, of which viewers need only be consigned to their armchairs for three to four hours.

A marked benefit for a game that exists in the fast-paced world of the 21st century.

But McGrath wasn’t speculating that 50 over cricket was a flagging warrior of the post-Packer epoch like many now commonly do.

He was making an observation of the changed nature of the game, in particular the extent to which the par score has magnified.

Why has this occurred?

Like anything, time runs its course and new developments ensue. Natural progression.

That considered, change was negligible between the World Series days of the 70s up until the early 90s, with scores as low as 150 still remaining competitive in various cases.

Then came a watershed moment.

A dynamic duo set the game alight in the mid-90s with their ground breaking approach to opening the innings.

Romesh Kaluwitharana and Sanath Jayasuria decided to adopt a gambit-like mentality to new ball batting, making use of fielding restrictions and a hard ball to get Sri Lanka off to flying starts.

All of a sudden, each and every team began selecting aggressive players at the top of the order, shirking the conservative ‘wickets in hand’ strategy to combating the threat of the new ball.

Spectators marveled at this newfangled style of play and almost instantaneously stakeholders grew aware of its economic potential.

National cricket boards were clearly under pressure to produce flatter wickets so this once audacious ploy became more of a foregone conclusion in that teams would invariably have posted 100 runs by the 15 over mark, with the loss of one of two wickets.

What’s more, bats have notably improved in quality, with power output and weight seemingly having no further correlation.

Field sizes closer resemble those of ice skating rinks than they do cricket grounds. Review systems are in place to ostensibly eradicate the possibility of human error, yet they have become more of a second chance draw feature of the game.

And fielding sides now have to replace withering balls at the midway stage of an innings just to ensure batsmen can clear stadiums, rather than measly boundary ropes.

Then of course came the T20 epidemic, arriving in England in 2002 before hitting the international scene in 2005.

This ensured players would dedicate sessions specific to aggressive and innovative strokeplay, while also cultivating attacking mindsets that are often hard to abandon when stepping back into the Test or one day arena.

All these factors have proven monumental in shaping the current 50 over game, and while the latter undertaking should and will remain, modifications need to be made in relation to the former variables.

One day cricket doesn’t have the appeal that it once did and although a lot of that has to do with the proliferation of its shorter equivalent, the imbalances in the game also contribute.

No longer is there a genuine contest between bat and ball, the game’s set up and its laws have been doctored to augment batsmen at the direct expense of bowlers.

Take the previously mentioned CUB series of 1996/97 for example – two of the finals matches were some of the finest spectacles one could ever witness in the sport, both winning totals were under 250.

Now it appears as though scores in excess of 300 are the norm and bowling economy rates of six are commendable.

Sure we see exceptions, but they are becoming increasing rarer as the clock ticks.

You might argue there is little difference in a final over thriller if it is a 350 or 250 game so long as the contest is captivatingly tight. But we mustn’t forget that bowling is an art and for that to be on show, bowlers must receive some assistance.

Wickets should seam a little early on, just as they should turn through the middle overs. Miss hits shouldn’t go for six but rather a bowler should be rewarded for his efficacy in deceiving the batsman.

Or has society simply gotten so deplorably bland that all it wants to see is gaudy display of virility, which sees a ball fly high into the earth’s orbit and come crashing down on a intemperate yobo’s beer for his mates to roar with delight?

These aren’t problems in Test matches, as the sheer length of their duration means pitches will wear and curators prepare their strips for results in the first place.

However, amendments are essential for the one day format of the game to bat on, for a purist’s sake anyway. 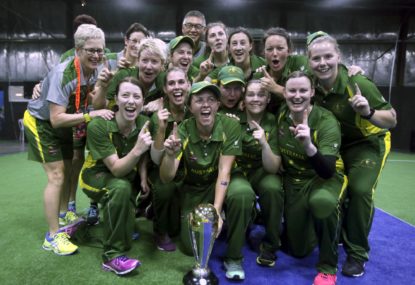