Adelaide have surged into the AFL top eight with an 105-point humiliation of Brisbane Lions that’s been soured by serious injuries to Andy Otten and Tom Lynch.

Forward target Lynch was taken to hospital for X-rays to his neck while defender Otten may require a second knee reconstruction after appearing to rupture his anterior cruciate ligament.

Both were stretchered off the Gabba in the second quarter on a warm Brisbane day but the undermanned Crows hardly missed a beat in a second-half cakewalk.

The 25.18 (168) to 9.9 (63) victory means they leapfrog both Essendon and Gold Coast on the AFL ladder, thanks to their strong percentage, reviving their hopes of hosting an elimination final in the process.

Ruckman Sam Jacobs was a star with 39 hit-outs and two goals to solidify his All-Australian claims while the Crows dangerous forward line enjoyed a day out.

Taylor Walker (six goals) and Eddie Betts (three goals and four assists) were constant thorns in the side of the Lions, delivering a sobering reality check to their rising defensive brigade.

After limiting their past five opponents to just 66 points per game, Brisbane’s backmen were embarrassed in front of a crowd of 19,657 with too many turnovers and loose Crows.

Adelaide’s midfield, outplayed by West Coast in last week’s loss and without Scott Thompson (hamstring), were dominant after the home side made a sparkling start to kick three of the first four goals.

It was Jacobs who quickly got them on top by dominating the stoppages against Stef Martin while Rory Sloane (28 disposals and two goals) was also integral to their charge to a 44-point halftime lead.

Lynch had also impressed with two goals before he ducked his head into Justin Clarke’s hip and play was stopped for six minutes while he was being treated with supreme caution by medical staff.

The stretcher returned to the field soon after when Otten fell awkwardly in a two-on-one marking contest.

Adelaide coach Brenton Sanderson had been worried about the heat on a 25-degree sunny Brisbane day and made an unsuccessful request for a lift in the interchange cap.

But he ultimately had little to worry about as his players, full of run, enjoyed the club’s biggest-ever win over Brisbane.

The Crows had 13 individual goal-scorers and slotted nine final-term majors to further embarrass the Lions with their worst defeat at the Gabba. 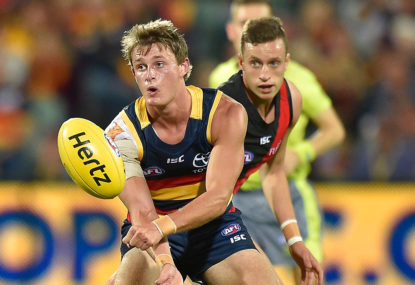