The ACT Comets should join the Matador Cup

Is it time for the Comets to make a return to the Australian one-day domestic scene? With recent changes to what is now known as the Matador One-Day Cup, I think it is.

The Canberra Comets – why they went with Canberra instead of ACT I’ll never understand – were part of the then Mercantile Mutual Cup for three relatively unsuccessful seasons in the late 1990s, picking up two sixth places and a wooden spoon.

They won just three matches during those three years, going winless in what would be their final season. That’s the same number of wins that the Sydney Thunder have managed across their first three BBL seasons.

More recently the Comets (with a couple NSW Second XI guys thrown in) have taken on Afghanistan and Ireland in a series of World Cup warm-up matches, and are also taking part in the Sydney Grade T20 competition in addition to Futures League duties.

Wouldn’t another team mean a longer tournament?
Last year saw the format of the domestic one-day tournament changed to be a condensed season opening, month-long carnival with matches confined to a specific location – Sydney last year, and shared between Brisbane and Sydney this year.

Teams play seven matches each before the finals (one more than last year), but double-up on two opponents. However, adding a seventh team wouldn’t actually require any additional matches.

All teams would play six matches, but importantly they would all play each other just once – a proper round-robin tournament. Twenty-one matches followed by the finals, same as this year.

What about Canberra as a one-day domestic venue?
More and more top level cricket is already being played in Canberra, having hosted Sheffield Shield finals and a couple of ODIs in recent seasons.

Next month Manuka Oval is set to host an Australia versus South Africa ODI, in addition to the annual Prime Minister’s XI match and a handful of World Cup group matches early next year.

Cricket Australia have also decided to host this year’s Big Bash League final at Manuka, despite Canberra not having a BBL team, much to the shared dislike of teams, players and fans who see the move to a smaller venue, with smaller capacity, and no home crowd as a questionable move.

With that in mind, and the current preference to consolidate the domestic comp in limited locations, perhaps Canberra could host the one-day tournament in the future and let the Big Bash League final return to a more suitable location.

Canberra probably wouldn’t end up being the solitary host, but rather as a shared arrangement – like between Brisbane and Sydney this year – and that would work just fine.

A successful return to the one-day domestic scene – in terms of the performance of both the team and the venue – could also help the national capital’s eventual chances of landing a BBL franchise should the competition ever expand beyond the current eight teams. At least then there would be a genuine reason for holding BBL games at Manuka.

Would an ACT side be competitive?
As anyone who has watched the first week of this year’s Matador Cup can tell you, even the established state sides have off days. Just ask Tasmania. So, the competitiveness of the side that the Comets could put together shouldn’t really be seen as a great concern.

The current ACT squad perhaps doesn’t have the depth of talent and experience it would need to be competitive initially, especially considering they are currently on an eight-match losing streak.

However, if they could lure back a few of former players who have since landed in other states, I can’t see why they wouldn’t be able to piece together a more than reasonable side.

Going one step further, depending on international commitments, would Brad Haddin or Nathan Lyon perhaps consider returning to represent an ACT side, even if it’s only for a couple of matches?

The current NSW squad has shown they have more than enough depth that they wouldn’t be affected, and it would give a good boost to a relatively inexperienced Comets side.

So, let’s say, absolute best case scenario, getting both Haddin and Lyon, plus a few other ex-Canberrans, mixed in with the top performers in the current Comets line-up, what could a potential ACT squad look like?

Of course, nothing says they would necessarily need bring back any former players, I’m just of the opinion that the added experience would help them be competitive right off the bat, rather than simply being there to make up the numbers.

What do you think? Would you like to see the Comets back in the one-day competition? Do you think they’d need the ring-ins to bolster their depth?

Tassie opener 'too nice' to hit ball so putrid, it left the commentators wheezing

Jordan Silk decided to pull out of what was effectively a free hit off WA bowler Andrew Tye… and he was quickly rewarded! 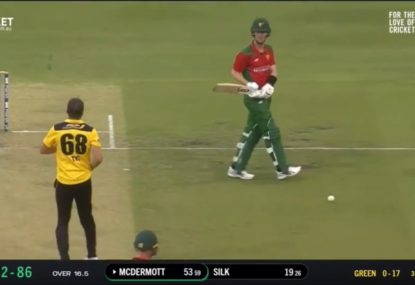 Tassie opener 'too nice' to hit ball so putrid, it left the commentators wheezing

The Chennai Super Kings have won their fourth IPL title with a comprehensive defeat of the Kolkata Knight Riders in the final in Dubai on Friday. 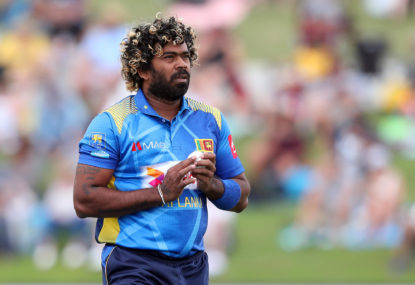 After reaching the semi-finals for two seasons in a row, the Renegades finished WBBL06 in seventh. 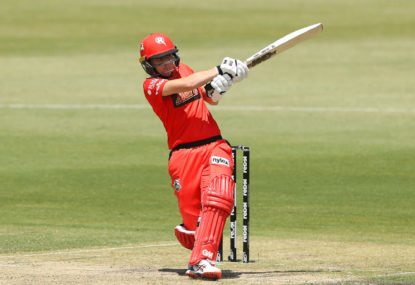 The Aussie captain maintains Pucovski is a chance to play in the Ashes this summer, despite his concussion setback.