Raiders need to grow a spine

It’s all about growing a spine for the Canberra Raiders in 2015.

Defensively, they need to harden up – conceding more points than any other club except the battered Wests Tigers last NRL season.

In attack, they need their new-look “spine” – the fullback, halves, hooker quartet – to gel quickly into a winning combination.

Fullback Jack Wighton is one of the game’s rising stars.

He played the last three games of the 2014 season at fullback, helping the Raiders snap a five-game losing streak to win all three and dodge the wooden spoon.

It’s the new halves pairing where there could be teething problems.

Former Wests Tigers utility Blake Austin has been given first crack at five-eighth.

But coach Ricky Stuart is still undecided on who to pair him with at halfback.

The battle will be between 2014 rookie Mitchell Cornish and youngster Sam Williams, who is returning to the club from St George Illawarra.

“They both have had different roles in the trials,” Stuart said.

“Mitch had some really good touches with the footy, Sammy kicks really well.

“But I’ve been impressed with both players.”

Defensively, the Raiders were nothing short of abysmal last season, conceding an average of 26 points per game last – 11 points more than premiers South Sydney.

To help fix that problem Stuart has brought in a swag of players with international and premiership-winning experience – including former Roosters forwards Sia Soliola and Frank-Paul Nu’uausala, ex-Melbourne winger Sisa Waqa and Hodgson.

“Two or three of the players that I’ve brought in have been a very strong focus for us in that regard.”

One leader the Raiders will be without is former skipper Terry Campese, who departed the club after 11 seasons for Hull KR.

“Milford was a massive loss, there’s no denying that. But we’ve got Jack Wighton, who’s just as dangerous as Milford,” Croker said.

“So with all due respect … we’re over Milford.

“Campo had been around 10, 15 years. Just his experience and guidance with all the young fellas was massive.”

While it will be an uphill battle for the Green Machine in 2015, Croker is confident the squad is finally starting to all pull in the same direction under Stuart.

“We’ve had a few distractions in previous years,” Croker said.

“But we started cleaning out the club as a whole, and we’ve got some fresh faces who have brought in a new attitude to the culture.

“The guys are buying into Sticky’s (Stuart’s) plan really well.

“So I don’t think I’ll have too much to worry about in regards to any distractions off field this year.”

Strength: The Raiders have bolstered an already strong pack with some decent pick ups. Maroons wrecking ball Josh Papalii will be backed up by international recruits Frank-Paul Nuuasala and Sia Soliola, while youngsters Shannon Boyd and Paul Vaughan are potential stars.

Weakness: With Milford and Campese gone, the Raiders have a lack of depth in the halves. A combination has to be built quickly, with the main contenders being Blake Austin, Mitchell Cornish and Sam Williams.

Money Man: Jack Wighton needs to step up in Milford’s absence as the club’s X-factor player. After a failed experiment in the halves, Wighton showed great promise at fullback in the final three games of 2014.

One to watch: Leaping Edrick Lee. There are big wraps on this former basketballer but he’s had two injury plagued seasons and needs to get some more game time. It will be interesting to see if his move to centre from wing pays off. 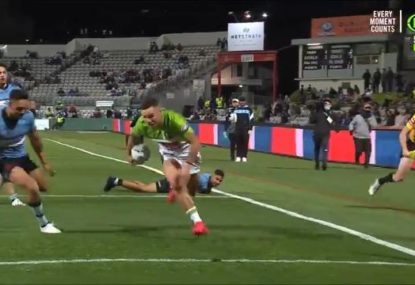 He went harder at Harley Smith-Shields’ jumper than he’s gone at a tackle all evening! 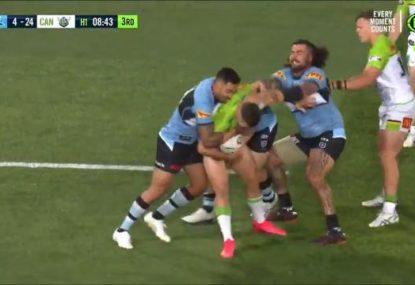 Time for mandatory extra padding in the corners? 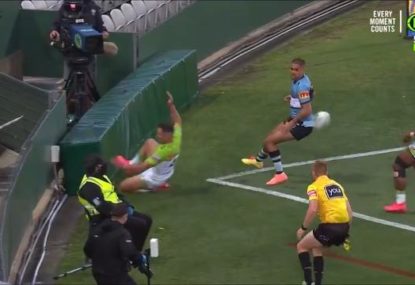