Given Ryan Crowley’s positive test has played out a fortnight before the Essendon verdict is handed down, it’s only natural the two cases have been attached – if only in the media.

Despite being one of the most engrossing and convoluted sagas in Australian sport, the Essendon timeline is relatively simple, however people are rightly demanding further details of the Crowley case.

The timeline seems sketchy. The confidentiality seems to be a double-edged sword.

And then there are the questions, such as why would a 31-year-old player with 188 games under his belt be so stupid as to go outside the club to source a painkiller?

The answers are yet to come, but from the outset it appears quite simple: the WADA code does not work for team sports, and it does not work in the AFL.

This premise is not new, and over the saga down at Tullamarine it has been raised time and time again.

But against the backdrop of Crowley and Ahmed Saad, who was banned for 18 months for taking a banned substance contained in an energy drink, another premise emerges.

It seems players don’t take any notice of the WADA code, and the education that is drummed into them since their name is called out on draft day is useless.

Patrick Smith of The Australian said as much in his column the following day, while also lambasting the “strict confidentiality” clauses that muddied the waters.

How else can you explain an experienced player like Crowley sourcing something from anyone other than a club doctor?

Experienced broadcaster (and Roar Expert) Glenn Mitchell wrote that the players of 2015 still have not learnt the lessons of Samantha Riley 20 years ago, who took a headache tablet in 1995.

Seems ridiculous that some of our sportspeople have learned nothing since the Sam Riley headache tablet saga in 1995. Maybe one day …

With the world at her feet ahead of the Atlanta Olympics, the controversy shook Australian swimming. Riley was exonerated after her coach Scott Volkers admitted to giving her the tablet, however the damage was done and she never was quite the same swimmer.

This defence could be the one that saves Crowley’s career.

As for Saad, well for all the contrition he showed over his 18-month ban, he still found the gumption to play a practical joke on the St Kilda doctor upon his return to the club by saying he was taking steroids during his ban.

“I just thought because I was suspended, I could,” Saad told the doctor, to the raucous laughter of his teammates.

In retelling the story to SEN’s Morning Glory show, senior midfielder Leigh Montagna thought it was a hoot.

“It was hilarious. The poor doc, he didn’t know what to do. But when Saady said ‘Nah just kidding,’ he got a very big round of applause. The doc was a bit coy about showing it, because he was freaking out. But it was very funny.”

This divided the community, with Morning Glory host Andy Maher lauding Saad for his ability to laugh at himself and his situation. But doesn’t it show naïveté of the highest order? And does it not also show the esteem with which players view the WADA code.

In 1997 Justin Charles tested positive to an anabolic steroid, and was subsequently given a 16-week ban as there was no AFL anti-doping code at the time.

Alastair Lynch was also controversially charged the following year after finding his medication for chronic fatigue syndrome contained a banned substance; however he took it upon himself to notify the Australian Sports Drug Agency and was eventually cleared.

And after 15 years we now have back-to-back cases where two players have either made innocent mistakes, or have a blatant disregard for the structures of the code.

And with the prospect of 34 past and present Essendon players also facing bans, the time is now for the AFL to shake up its anti-doping code.

Joel Hamling will miss the start of Fremantle’s AFL season after the defender suffered a serious ankle injury at training. 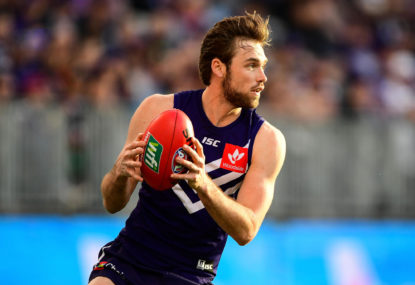 The Fremantle Dockers have always felt a bit gimmicky to me.