Crunching the numbers, the A-League has a bright future

An almost hushed A-League is upon us. It has approached with little fanfare to date after a very busy sports year.

With the Asian Cup, cricket, rugby, women’s football and netball World Cups, as well as Super Rugby, NRL and AFL, some are sported out.

There are still some major issues between the PFA and FFA, and I do wonder if it will spark a more militant approach by player associations in other codes. Or will it limit itself to football?

Another elephant in the room is that Steven Lowy is replacing father Frank at the FFA, and the question of whether the game can survive as a code without his steadying – the cruel would say dictatorial – hand at the tiller guiding the ship through troubled waters.

Of course we have the police acting independently and saying Western Sydney Wanderers fans cannot clap or stand up. I wonder if this issue will flare up in the early games.

Taking a broader perspective and then narrowing back down to Australia is a useful exercise, if only to appreciate what football is.

Football is by light years the world’s biggest sport. We can list the countries who don’t have football as their number one code – India, Pakistan, Sir Lanka, USA, Canada, Venezuela, Philippines, Australia, Papua New Guinea, New Zealand, Fiji – and consider it’s only about 2.2 billion people out of seven billion people.

However in India, Venezuela and Fiji football is the number two code. In Australia, US and New Zealand football is a major participation code and all have professional leagues which are expanding and growing faster than most of their competitors.

Pakistan, Sir Lanka, Canada and the Philippines is where football is weakest, but far from unknown, and far from not having teams or competing in FIFA tournaments.

In 2007 FIFA undertook the big count and football had 280 million players, which included 60 million women. Australia, US and Canada have had very high growth in player numbers recently, with the same occurring in Asia. If we take an average growth rate of 2.5 per cent since 2007, the player numbers today would be around 333 million.

Mathematics is a science where over time large samples allow comparisons to be made. Both football and rugby enjoy large overseas player bases. As does rugby league in Papua New Guinea, New Zealand and England, as well as increasingly from Oceania countries. Cricket has tens of millions of player numbers.

I’m making some assumptions that may be close, however even if they are out the areas they highlight still stand out. Assume the average player numbers per game is 30. Two sides, 15 players, I think this is too high but it’s a number.

Back to the A-League there is a good level of skill – assuming good scouting – available for the five visa spots in each team. There is a rich tapestry of players and styles we can watch and copy. A few times in the season just passed I watched a number of park games and watched some junior teams training and have been astounded at the rise in technical awareness.

I think we are about to enter a flat year, maybe even a slightly negative year. But when I look at the player numbers and the health of the game worldwide – leaving aside the World Cup corruption – I think the A-League has a very bright future as football has been in many worse places than it is today. In five years we will be looking back at this time as a minor blip along the road.

Further the ABS chart below even allowing it’s from 2009 clearly demonstrates the broad support across Australia that football has in its player pool. FFA are working very hard to develop the players to games and to be in front of screens and the A-League has a huge part to play in this. 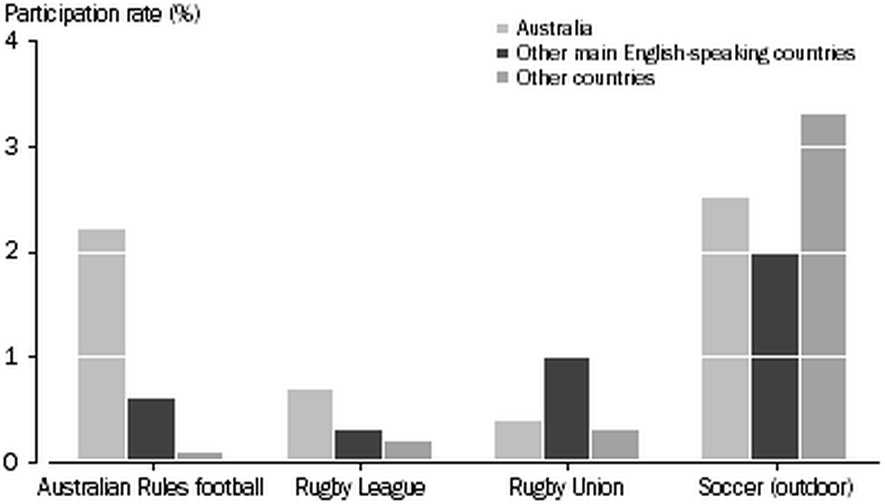 Football will find in time its own way, already football terms are being used by other codes – derby, tracking back, et cetera – especially when we connect as fans with other countries.

Finally, in support of WSW, I suggest we all clap above our heads and march to the crowds.

In the immortal words of Marc Boland “Bring it on bang a gong” the season is about to start.