The ICC has a credibility problem.

Over the past week, two Test matches – one at Kingsmead in Durban, the other at Queen’s Park in Port-of-Spain – have been wiped out by rain.

Both Tests were scheduled outside the traditional cricket season for both countries.

August in Trinidad is the second wettest month of the year, while conversely, the same month is the driest in Durban.

The match between West Indies and India became the third shortest non-abandoned Test in history when the umpires called off play at 9:30am on the fifth morning.

The entire match consisted of just 22 overs, all bowled in the opening session on the first day, before the rain started to fall.

By the time play was due to start on the second day, the skies had cleared and they remained so for the next four days – yet not another over was bowled.

Despite three successive days of sunshine, the fifth day was called off before the scheduled start time. Queen’s Park Oval is considered one of the best draining venues in the Caribbean. That being the case, you wouldn’t want to see the others.

Clearly, the drainage at the ground does not meet 21st century standards. No ground in Australia – or, for that matter, several other countries – would ever see four days abandoned because of rain on the opening day.

Compounding the issues in Trinidad was the fact that there was no ‘super sopper’ at the stadium, and the ground staff had failed to cover the entirety of the bowlers’ run-ups.

While the pitch was fit for play, the outfield remained unsuitable for four days.

In Durban, it was also the outfield that was the problem when rain fell after stumps on Day 2, leaving no further play possible despite no further showers.

Like the Test in Trinidad, the call to abandon the match was taken before the start of the final day.

In both cases, it was only the pitches that were covered, with the vast bulk of the outfield left exposed to the elements.

Contrast that with the recent Test series between Sri Lanka and Australia, where ground staff pretty much covered the entire ground when rain fell. Such actions are pretty much standard practice on the subcontinent.

Of a possible 900 overs across the Tests in South Africa and Trinidad, a mere 122 were realised. That is totally unacceptable. (Click to Tweet)

Television companies pay millions of dollars in rights fees to showcase the game, and give over-block programming to cover the sport.

Test cricket is perennially under siege from not only the shorter forms of the game – especially T20 – but also other sporting codes. Maintaining interest levels and ground patronage is not helped when grounds have substandard surfaces or lack the necessary manpower and equipment to ensure play can continue.

The introduction of so many corporatised T20 leagues around the world has forced Test cricket to schedule series at non-traditional times of the year. This makes it imperative that the grounds are weather-proofed as best as can be.

Test cricket, like few other sports, is played at the behest of the weather gods.

For it to survive, it needs to be governed more stringently. It is time the ICC started placing mandatory requirements on associations that wish to host matches.

Modern and effective drainage, along with an appropriate level of ancillary equipment and manpower must be mandatory.

It is incumbent on the ICC to move towards best practice in this area, otherwise the longer form of the game will continue to be compromised, as it has been over the last seven days.

Hazratullah Zazai hit a 17-ball half-century in his first game for the team, joining two others that have completed the feat. 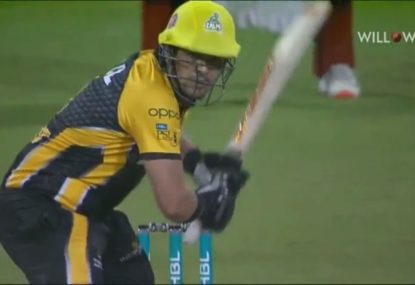