A dominant second half from the Perth Wildcats has given them an important road win in the NBL grand final series to move ahead 2-0 against the Illawarra Hawks, giving them a chance to wrap it up in straight sets at home on Sunday.

It was another 12-point win for the Wildcats, and the exact same score, 89-77, as Game 1. It didn’t play out too dissimilarly from Game 1 either, although the visitors didn’t have it quite as easy as they did to kick off the series.

The Hawks came rolling out of the gates for the second time in a row, and managed to hang onto their momentum all the way into the halftime break this time where they held the lead by five points.

AJ Ogilvy was the man to spark the Hawks in the first quarter, playing with a renewed sense of aggression and energy. He pulled down rebounds, dominating the glass and had a stack of points early in the piece.

The Hawks had increased their lead to nine points with about four minutes to go in the first quarter when Trevor Gleeson finally called timeout to try to bring things back under control for his men in red.

While they didn’t cut the gap completely by quarter time, they had brought it back to six points with Casey Prather and Bryce Cotton starting to get involved in the game, while Matty Knight contributed plenty.

The second quarter was a see-sawing affair, Cotton and Prather keeping the Wildcats within striking distance while Ogilvy continued to rack up the points, seeking out the help of import Rotnei Clarke.

Unfortunately for the Illawarra, their offence completely failed them trying to hang onto a five point advantage at the half, with a man of the match performance from Damian Martin stealing the show.

Clarke was the only threat for the Hawks during the second half and he simply couldn’t stand up to the juggernaut of Prather, Cotton and Martin. The trio squeezed the life out of the Hawks offence and then used it to benefit their own offence, Cotton ending with 20 points.

Martin was the star of the show though, landing four three-point shots to sink a dagger into the hearts of the Hawks and their passionate supporter base.

Martin ended with 17 points and led the Wildcats defence with the same caginess he always does to ensure there was no coming back from a four-point deficit at the three-quarter time break.

Probably the biggest worry for the Wildcats heading through the rest of the series is the health of big man Matty Knight. He suffered a head knock in the third quarter and didn’t return with a visibly bad concussion as he left the court. Whether he plays on Sunday is certainly up in the air right now.

The series now heads back to Perth for Game 3, with the Hawks needing to win all remaining games to become champions – something that looks very unlikely. Perth could well have their eighth championship wrapped up in straight sets come Sunday. 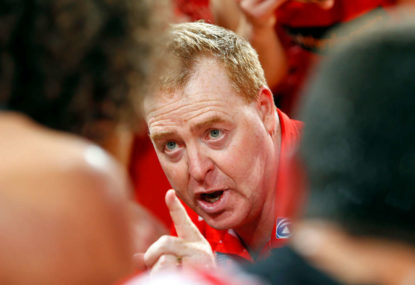