More than a woman's game: 16 players per side is the AFL's future

Just over a week ago, I spoke on the air with Kevin Bartlett about his vision for fewer interchanges as a method to prevent flooding and the other tactics it brings.

Fewer interchanges can help the problem, but would also lead to a slimmer body shape, due to the need for even more cardiovascular output.

This is where KB and I respectfully disagree but, more importantly, our mutual goal is still in creating more space for a free-flowing game.

The game is simply more exciting to watch when it is played out in the open. There is nothing wrong with flooding, it is a sound tactic, but it is not the most exciting thing to watch.

This is where the AFLW comes into play. With two fewer players per team on the field, the ladies took a different approach to the ball. 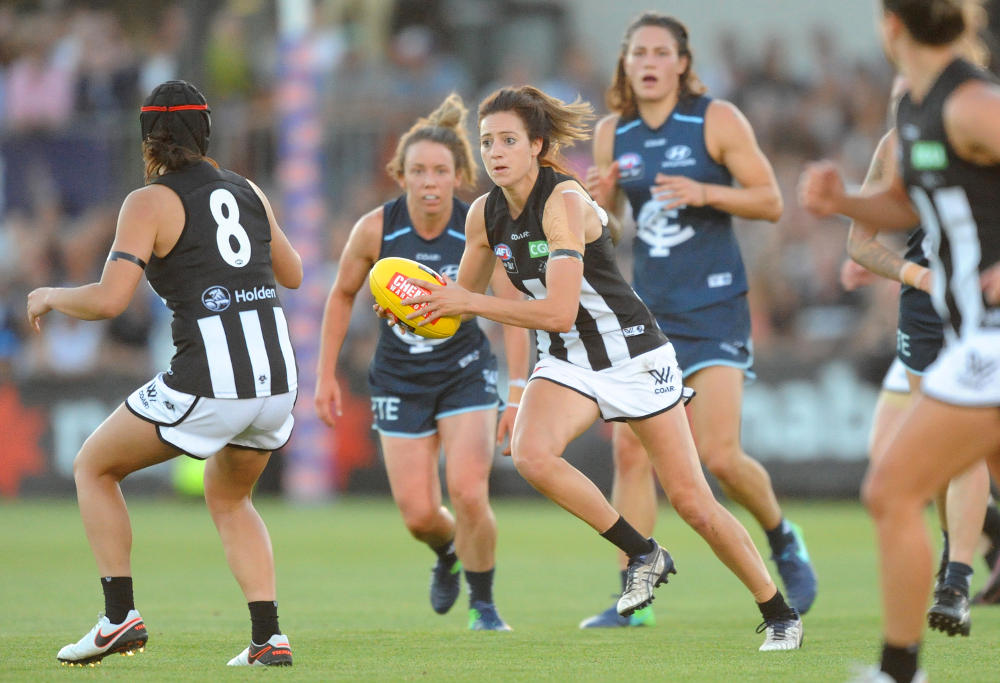 Sixteen bodies per team on the field means each player will have to cover more ground. Therefore, it would not be possible for players to cluster and flood the way they do now; simply put, more ground to cover per person means less time to get there.

It is possible that, as a result, men’s games would have fewer goals and behinds, but this is largely unfounded. Simply spreading each area of the field more thinly will likely increase the score due to more gaps.

When we compare rugby 15s to sevens, the above happens and at a more frequent pace. Fewer players with the same ground to cover means more holes in the defence in which to score tries.

Additionally, the nature of sevens is similar to the style of play seen in the AFL. Without the ability for the big boys in the forward pack, due to the sprint nature of the game, sevens players cannot rely on the breakdown at the ruck to maintain ball possession. Additionally, without a similar rule such as the AFL’s mark, the gameplay is even more similar in its continuousness.

With that said, is this a rule change that the AFL would implement, and is this something that fans would be alright with?

For the latter, there will definitely be hostility by purists to maintain the game at 18 a side. As for the former, there is always the option of experimentation in the preseason, with the mindset of implementation should the goal of more open play be achieved.

But these ‘purists’ tend to be selectively forgetful. Only 15 years ago, the minimum distance for a mark was raised from ten to 15 metres – a noticeable 50 per cent increase in length. Yet many not only agree that this has been better for the game, but also adjusts to the faster and stronger players that we have today as compared to when the sport started in the 1800s, let alone the increased professionalism in the last 20 years.

As a result of the success, there have been talks of increasing the minimum to 20 metres. By spreading the distance of marks in conjunction with fewer people, flooding would likely diminish in a meaningful way.

Still, we can never know how players and coaches respond so without a live test, it would be difficult to predict the future even with a credible correlation based analysis

Incredulously, all my 19th man hats will instantly become either obsolete or a retro throwback; isn’t that really the point? It is a matter of perspective.

Just because a rule has gone unchanged does not mean the game has not adapted to tactics that exploit it. In this sense, keeping a rule the same only promotes a change in style, whereas adjusting the letter of the law to maintain a style of gameplay is a legitimate way of maintaining the positive aspects of a sport, albeit usually overlooked.

For some reason, there is and has been a stigma in using this latter tactic, largely from the false sense of comfort in perceived consistency, as the words on the page have not changed. But this is false and we can see it in many sports as we do in laws.

On top of the changing tactics to exploit the written-in-stone words are the changes in interpretation of the AFL’s Laws of the Game.

Simply put, is it necessary to implement a third man up rule change when Law 15.4.5 (f) already says, “A Field Umpire shall award a free kick against a player who makes prohibited contact with an opposition player by unduly pushing, bumping, holding or blocking while contesting a bounce, throw up or boundary throw in”?

This may be pedantic to some but the rule says that there is a prohibition of contact with an opposition player. Arguably, one could say that the key word is “unduly”, but when you compare the ruck of yesteryear to today, clearly it does not line up and there is more contact now than ever before.

Additionally, why do we now need to declare who the ruckman is? A ruckman is already defined as “The player whose sole objective is to contest the ruck shall be permitted to do so”. This being the case, the actions of the player already clearly demonstrate whether they are the ruckman or not. Not only is the new rule unnecessary in light of the above, it sounds like it was taken from or, in the very least, heavily influenced by the eligible receiver rules from the NFL.

Typically dealing with the tight end position, these rules pertain to those required to be on the line of scrimmage and are still considered eligible to receive a forward pass.

These two law changes in the AFL exemplify how new laws are being added to keep the gameplay similar to the old style of play merely as a result of the interpretation changing regarding the laws that have remained constant over time.

With this in mind, yes, there will be opposition to reducing the number of players on the field to 16, but doing so would maintain the style of gameplay we prefer to watch.

Because of the AFLW, we have a seen how reducing a side by two players can impact gameplay in a competitive format. As such, let’s consider this option, press forward, and give it a go.