Fizdale's fireball: Is blasting umpires a good investment or unacceptable?

Fizdale said the officials were “unacceptable”, “unprofessional” and “did not even give us a chance”, before literally slamming his fist on the desk and storming out.

A quick glance at the game and the stat sheet had most spectators in agreement.

Memphis took eight more inside shots in the first half, but were victims of a lop-sided 23-6 free throw count at the main break that blew out to 32-15 by the end of the game. Much to the delight of the home crowd, subtle shoves and more obvious elbows from San Antonio went unnoticed and uncalled, as they took a 2-0 lead in the best-of-7 game series.

Somewhat surprisingly, ex-Boomer and Sydney King Shane Heal was far from disappointed with Fizdale’s comments – which are sure to attract a hefty fine – labelling them as a “good investment” the next day on Fox Sports.

Heal’s reasoning was that by making the referees aware of his view, Fizdale is ensuring that they are subconsciously affected when they officiate the Grizzlies’ next game. Of course, Heal isn’t saying the officials will deliberately try to make amends for their most recent performance, but they may certainly take more notice of potential fouls committed against Fizdale’s men, as his comments stay nestled in the back of their minds.

Richardson claimed it is unavoidable for umpires to be subconsciously affected by partisan crowd noise at grounds such as Domain, as it can affirm their decision to award a free kick for the home team when they might have otherwise hesitated.

Although Richardson’s more diplomatic comments were not sanctioned by the AFL, as Fizdale’s are sure to be by the NBA, they could also be seen as a strategic move. By putting this view on the table, umpires may now second guess themselves when the home crowd roars for a dubious free kick, for a seed of subconscious doubt has been planted in their minds by Richardson and his theory.

But is it really fair for coaches to make comments that undermine the integrity of our officials just because it might possibly be in the best interests of their team? Umpires do a thankless job that no one is envious of and no professional sport could take place without them. Strong criticism such as the barrage of abuse delivered by Fizdale can have a negative impact on the amount of young people wanting to become officials, and if the numbers decrease the quality is sure to diminish. Umpires are human, and humans make mistakes.

But humans, and therefore umpires, also have off days and turn in a poor performance on occasion. So as it is for athletes, general feedback backed up by statistical evidence is important in order to continually improve standards and rectify errors.

Of course, this should really be a job for umpiring departments, but they can’t be across every game in as much detail as a competing team’s coach is – so that coach’s feedback can be quite valuable when delivered in a reasoned manner.

But when fists meet desks and criticism is so pointedly levelled at the integrity of the men with whistles, heavy penalties should and will follow, and the coaches in question may find borderline foul calls even less forthcoming.

St Kilda sensation Jack Steele has backed himself to successfully juggle the weight of expectation with the burden of captaincy as he attempts to back up a stellar 2020 AFL season.

His Western Bulldogs might have lost their AFLW season opener but Nathan Burke still had a beaming smile on his face post-game as he enjoyed a proud father moment. 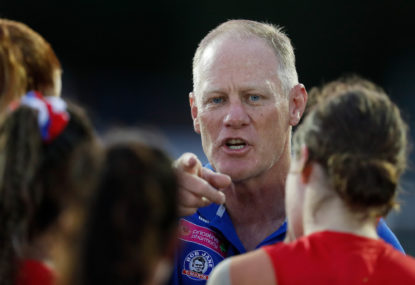 For the second trade period in a row St Kilda were big players in free agency and the draft, telegraphing from a fair way out who they were going out to get and holding their nerve to get the deals done.