The Golden State Warriors completed one of the most impressive comebacks in recent playoff memory, erasing a 25-point deficit to win game 1 of the Western Conference Finals at The Oracle Arena.

San Antonio jumped out to an early lead but couldn’t deal with the loss of Kawhi Leonard to injury as Golden State increased their intensity late in the game.

Steph Curry lead the Warriors with 40 points – including 19 in a crucial third quarter that pulled Golden State back into the contest. Kevin Durant also came up big for the Warriors, pouring in 34 points as he took over the game in the fourth quarter.

For the Spurs big performances from LaMarcus Aldridge – 28 points and eight rebounds – and Manu Ginobili, who had 17 points off the bench were not enough to overcome the absence of their talismanic forward Kawhi.

Leonard left the game after rolling his ankle, the same ankle that forced him out of game 6 with the Rockets, following contact with the foot of Warriors forward Zaza Pachulia. When Leonard went to the locker room with 7:53 left in the third quarter the Spurs led by 23 points.

Seemingly energised by Leonard’s departure Golden State immediately went on an 18-0 run from which the Spurs never really recovered.

Before his injury Leonard had been at his clinical best – scoring 26 points on an efficient 7 of 13 from the field. Leonard had also locked down Kevin Durant – who went 4 of 11 with Leonard on the floor compared with 7 of 10 after Leonard exited. 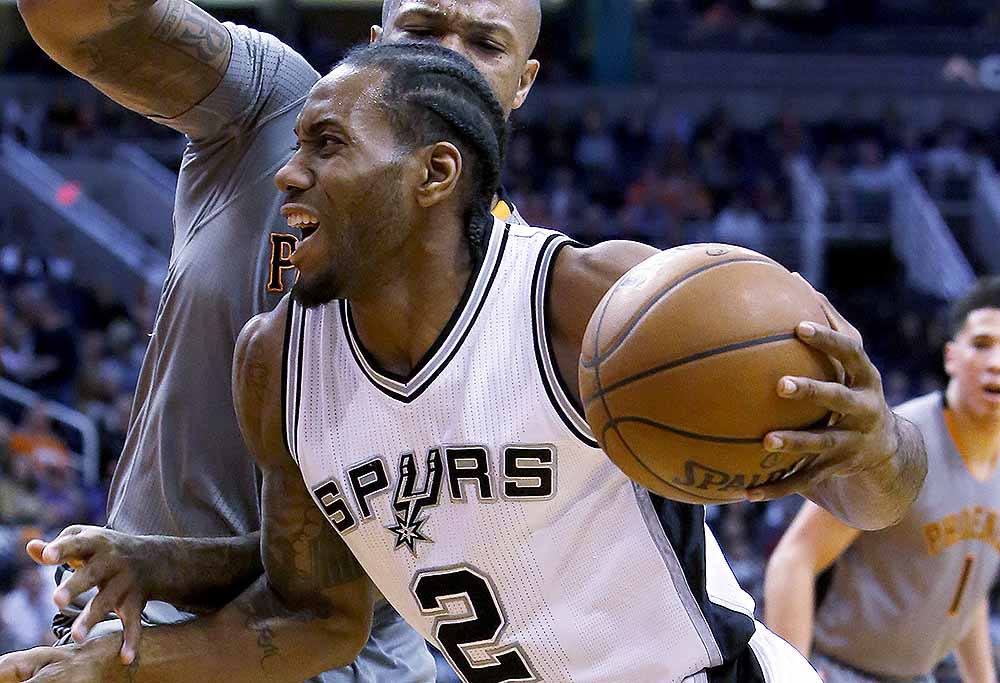 The impact of Leonard’s departure was evident at both ends of the floor. Without their most potent offensive weapon the Spurs looked impotent on offence. The Warriors could focus more of their defensive attention on Aldridge and the Spurs simply didn’t have an answer.

Defensively the impact was even more striking. Before the Leonard injury the Warriors were shooting a uncharacteristic 40 per cent from the field – this rocketed up to 58 per cent after Leonard left the game.

While it is tempting to dwell on the absence of Leonard it should not be forgotten that the Warriors were outstanding in the second half. Curry produced one of the finest performances of his playoff career as he delivered a thermonuclear shooting streak that turned the tide of the game.

In combining for 74 points Curry and Durant delivered the kind of performance the rest of the league feared they would when they joined forced last summer. With KD’s ability to score from anywhere on the floor coupled with arguably the greatest three point shooter in NBA history, this Warriors team have the ability to score at a truly insane pace.

The Warriors have such a terrifying array of offensive weapons that they can overcome bad shooting quarters or even halves as they did last night. Klay Thompson had a quiet shooting night – going just 2 of 11 – and Draymond Green was limited to just nine points. The worrying thing for San Antonio is it feels like the Warriors have much more in the tank.

Without Leonard the Spurs seemed to loose belief that they could win while the Warriors confidence only grew. With Leonard operating at 100 per cent this could be a competitive series but if he misses significant time the Warriors will likely roll on the Finals with little resistance.