NRL team of the (mid)season

With 13 rounds down, NRL has passed the season’s halfway point, so it’s time to consider the team of the year (so far).

Fullback: Clinton Gutherson
Gutherson has played more at five-eighth this year, but he couldn’t be left out of defence – he has been a sensational third in line breaks this year and first in points, always making plays.

Wings: Jordan Rapana, Josh-Addo Carr
Addo-Carr’s pace and great finishes mean Storm fans no longer miss Marika Koribete; however, Jordan Rapana has easily been the best winger, leading in line breaks and tries. His great balance and footwork make it difficult to tackle easily, and he’s been the best outside back so far.

Centre: Dylan Walker, James Roberts
Dylan Walker and James Roberts have been great strike weapons for their respective teams, and both have been unlucky not to make Origin this year. They’ve been electric on numerous occasions to score or create tries from nothing.

Five-eighth: Gareth Widdop
Widdop has been the catalyst for the Dragons’ great start, and his absence showed the team lacks class and direction to put teams away without him.

Halfback: Mitchell Pearce
Pearce is in career best form and has on multiple occasions won games for the Roosters – the Anzac Day match against the Dragons in particular.

Props: Andrew Fifita, Paul Vaughan
Paul Vaughan is the buy of the year so far, and his late footwork and power running has completely changed the Dragons pack. Fifita’s performance in Origin 1 more than justifies his place in this team. He has been a force with the Sharks, and he took his game to another level for the Blues.

Hooker: Cameron Smith
Cameron Smith makes this team by leading Melbourne to first on ladder and for leading the Dally M count. Smith is at his best dictating games, always being two steps ahead.

Second row: Boyd Cordner, Matt Gillet
Matt Gillet is having another great year, and his amazing defence, especially on the goal line, and overall toughness gets him a look in this team. Boyd Cordner, the newly appointed New South Vales captain, is the best running back-rower in the NRL. He has formed a great combo with Mitchell Pearce and has a great deal to do with the Roosters success.

Lock: Paul Gallen
Paul Gallen at the age of 35 is still producing at a high level. His high workload coupled with his great running and offloading makes sure his age is just number.

Would you say this is the best team of the season so far? And who do you see dropping out and being added by the end of the year?

Parramatta can equal their best start to an NRL season with a win against Penrith on Friday night, after also going 5-0 in title-winning years of 1983 and 1986.

Wests Tigers coach Michael Maguire says NRL blowouts are exposing teams that did not work hard enough on fitness during the coronavirus shutdown. 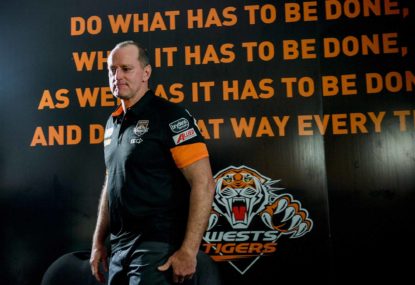 Parramatta have beaten Manly 19-16 in a controversial match at Bankwest Stadium, with the Sea Eagles wrongly denied a last-minute try by a forward pass call.

‘We didn’t get much rub of the green tonight.’ 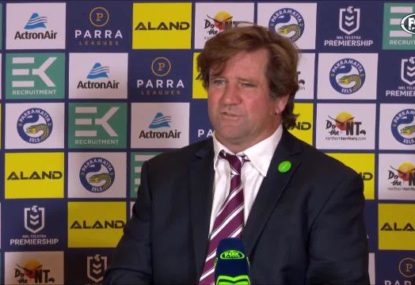