Richmond's choking and Hardwick must accept the blame

Damien Hardwick just doesn’t get it.

His team keeps losing the same way, and the rabid Richmond army is furious. They are ropable enough at the losses, most of which are following the similar pattern of giving up big leads before going down narrowly. But the public utterances from the coach are worse.

After throwing away a six-goal lead against Sydney to go down by nine points, Hardwick explained it thus, “We’ll keep the games close…we’re not going to win games by ten goals…it’s always going to be an arm-wrestle.”

Why would they not want to turn a 36-point lead into a ten-goal win?

Why would they not want to beat a very weak and gettable GWS by ten goals after breaking them down twice, to lead by 31 points at quarter time, and then by 31 points again late in the third quarter?

Why would a 32-point lead over a struggling Western Bulldogs turn into another single figure loss, instead of a big win?

Respect has to be given to the opposition, yes, but a pattern has emerged. There has to be a mentality at play here, led from the top. It’s a mentality that is clearly seized upon by opposition teams who know they are never beaten against the Tigers.

There has been another common theme to the three Richmond losses mentioned above. The leads have been developed through an opening term of blitzkrieg football of high intensity, high pressure, and capitalising on the scoreboard. 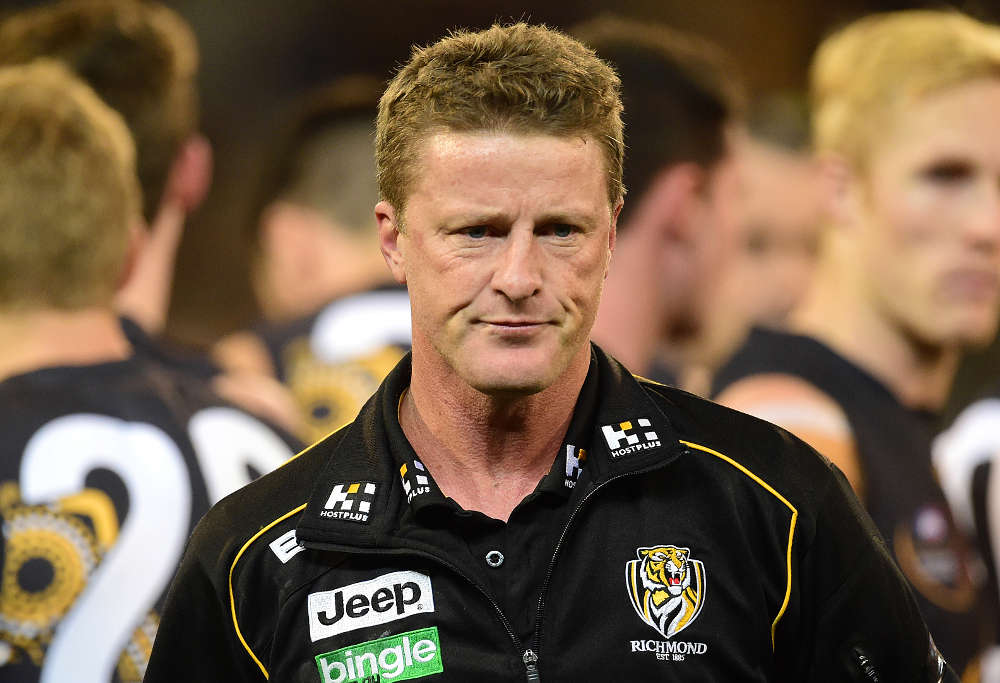 The extinguishing of those leads has been on the back of being worn down over the next three quarters, with the Tigers failing to replicate the pressure and finishing from their opening stanza. This is usually coupled with more conservative ball movement, which allows opposition defences to clog up the forward-line, making it harder to generate quality scoring opportunities.

Against the Bulldogs, Richmond kicked five goals to one to open the game, but kicked only six more for the game.

Against GWS, it was six goals to one in the first quarter, but only four more goals after that.

Against Sydney, it was five goals to none at quarter time, but they were only able to kick five more goals across the last three quarters.

As well as the above, there has also been, and we have to call it for what it is, some good old-fashioned choking. Richmond is not a mentally strong football team. In fact, collectively, they are a mentally weak one.

Simple set shots are missed when the pressure has been on, from Jack Riewoldt on down. Shanks that gift opposition goals at critical moments, from a variety of Tigers. And let’s not talk about the defensive structure abomination that was the last 20 seconds against Fremantle.

Think back to the 2013 elimination final against Carlton. Leading by the best part of six goals, only to be overrun in the second half. Most don’t remember that it was actually the third time that year against the Blues that the Tigers surrendered a lead of five goals or more. History repeats, and repeats, and repeats.

Think back to the 2015 elimination final against North Melbourne. A 21 point lead vaporised.

These big stage losses haunt the club still. So much so that they are now seemingly embedded in the Richmond DNA. But they were not isolated incidents. The Tigers have turned many healthy leads into either narrow wins or crushing losses under Hardwick.

The response from the coach to these performances is usually a variation on “we’ll learn from it and move on.” On Saturday, after the loss to Sydney, it was specifically “We’ll learn a bit out of it and we’ll go forward.”

Move on, they might. Go forward, they do. Learn from it? Well, there’s no evidence of it so far.

The best sides are lauded for their will to win, and can often come from seemingly impossible positions to get the job done. Think of Geelong against Hawthorn in all of those “Kennett’s Curse” matches. The Hawks in recent times are another that comes to mind.

Richmond under Hardwick are the reverse of this. They are never home. They can snatch defeat from the jaws of victory in any number of ways.

Once the Tigers develop a lead, and the opposition kicks a couple of goals in a row, every player on the field and every person in the stands knows what is coming next. The mental weight is proving too much for the team to bear.

In order for Hardwick to change behaviour, he has to first acknowledge it. It’s time for him to look in the mirror.