How the hell was Paul Gallen not charged? Yet more inconsistency from the NRL

Somehow Paul Gallen has escaped even being charged for a high tackle he perpetrated during Saturday night’s game against the Raiders.

It is a yet another example of the inconsistency and ineptitude that we have unfortunately come to expect from those running the National Rugby League.

There was a mass of hysteria that surrounded the non-send off of Sia Soliola in Round 20 when he collected a slipping Billy Slater late and high. A lot of people thought that we’d see a knee jerk reaction from the officials and that players in the following weeks would be sent off for such misdemeanours as a sly facial or farting in the scrum.

The reaction of General Manager Officiating Tony Archer to the Soliola non-send off strongly suggested non-decisions from his officials would no longer be tolerated. Soliola’s non-send off would be the offence that broke the dismissal-shy referee’s back.

The video referee, Bernard Sutton, and the pocket referee, Chris Butler, were both singled out by Archer as the men who failed to send Soliola off (notably, Matt Cecchin was cleared of all responsibility). 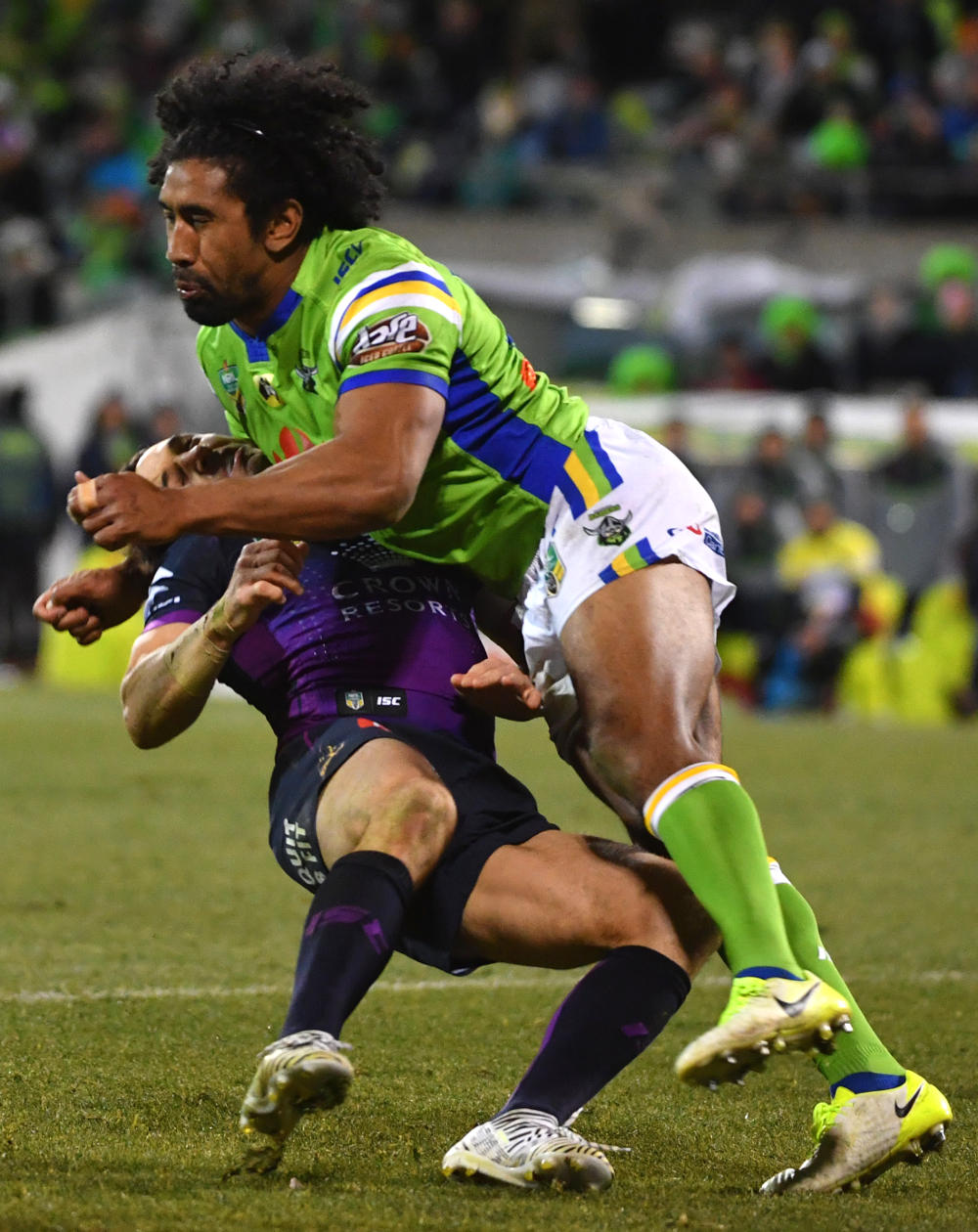 Both Sutton and Butler were dropped for the next round and, although Sutton has once more taken his spot in the Bunker, Chris Butler has been relegated to the touch line, swapping his whistle for a flag.

And when it comes to sending players from the field it seems that the referees are as gun shy as ever. This was highlighted by two incidents on the weekend.

The first was a spear tackle by Bronco Joe Ofahengaue on Titans Lock Max King in the 58th minute of Saturday evening’s game on the Gold Coast. Whether intentional or not, the tackle was awful and we were lucky that Max King was not very badly injured.

Given the fate of Sutton and Butler, it was a very good bet that Henry Perenara, his pocket referee Jon Stone, and video referee Jared Maxwell – who himself sat out three rounds following his role in the awarding of the Akuila Uate ‘try’ in Round 14 – would give Ofahengaue his marching orders.

As it transpired, Ofahengaue was only put on report for an offence. The Match Review Committee subsequently deemed it a dangerous throw worthy of five weeks on the sideline. That clearly tells us that they thought it was a send-off worthy offence.

Yet again, the officials lacked the courage to enforce the rules. That was especially strange as, at that point, the score was 28-0 to the Broncos and a send-off was highly unlikely to affect the result.

The second incident occurred on 56 minutes at Shark Park on Saturday night.

Just minutes after Josh Papalii was correctly sin binned by Gerard Sutton, hulking six-foot-four Raiders prop Shannon Boyd ran the ball completely upright towards the Sharks line. The five-foot-eleven Cronulla captain, Paul Gallen, ran out towards Boyd and leapt into the tackle, leaving the ground and collecting the Canberra prop flush in the throat with a swinging arm.

These are the facts.

Paul Gallen is still displaying staggering speed, aerobic fitness and strength for a man turning 36 next week. However, Shannon Boyd is a huge lump of beef and was bred very tough on the farm in Cowra. He was able to take a shot that would have laid out the likes of Billy Slater and possibly killed the likes of us punters.

However, the replays of the hit were damning. Gallen unequivocally ran at the ball carrier and jumped into the hit, getting a significantly taller man in the throat with a swinging arm. 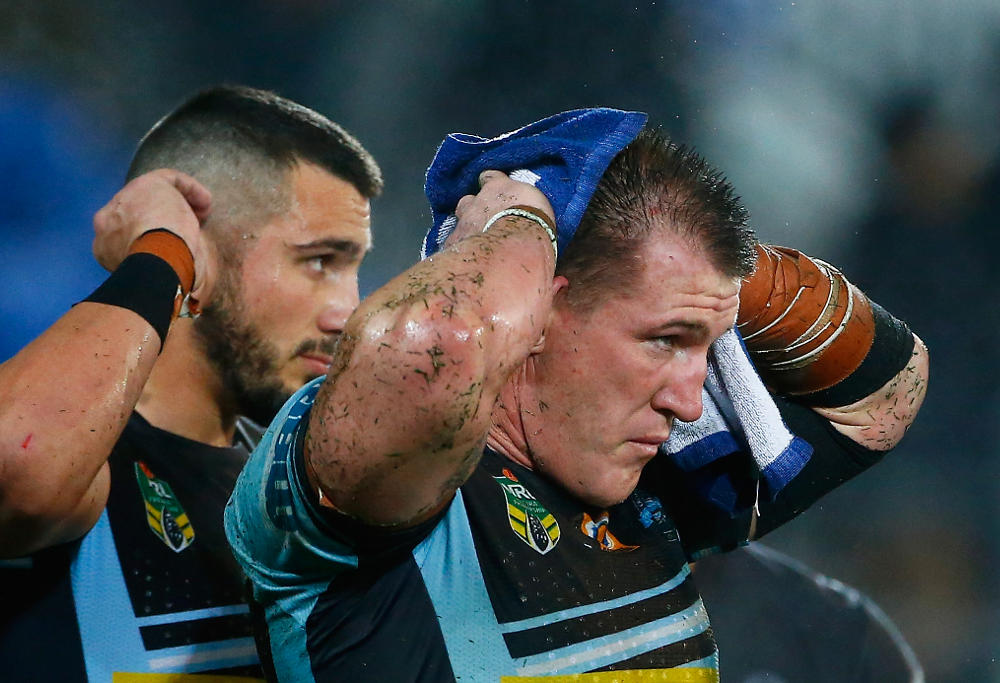 “Oooooooh! Gee whiz! Will the 300th be played next week?” said Fox commentator Brenton Speed on seeing the replay.

The tackle was indisputably high and, in my opinion, it was reckless.

Yet it was not even put on report.

Gerry Sutton, his pocket referee Adam Gee and even the chastened Bernard Sutton in the Bunker let it go with just a penalty.

However, what happened – or rather didn’t happen – next was a total disgrace.

The Match Review Committee did not even charge Paul Gallen for the hit. He will not even cop a fine, let alone any suspension.

And he will play his 300th game next week, ironically against Joe Ofahengaue’s team.

I asked the boss of the NRL Media unit, Glenn Jackson, just who was on the MRP that reviewed the Gallen high tackle. I have received no response. If I were one of the people responsible for letting this incident go without charge, I’d certainly want to be anonymous.

Want to know what is totally broken about rugby league?

1. We’ve got refs who don’t send players off, no matter how blatant the crime,
2. We’ve got a referees boss who takes little responsibility himself but seems trigger happy when it comes to scapegoating his charges, and
3. We’ve got a match review committee that can give totally inconsistent assessments that sees one player handed a large penalty while another one – who has quite the list of priors to his name – is deemed to have done nothing wrong whatsoever, when most students of the game would not be able to separate the offences in terms of severity.

President Harry S Truman has the ignominious legacy of being the commander-in-chief that ordered the atomic bombings of Hiroshima and Nagasaki. He famously had on his desk a sign that said, “The buck stops here.”

He was the boss and he would not shirk the hard decisions.

The question is will the leader of our NRL, Todd Greenberg, make the hard decisions and fix this fiasco? Will the buck ever stop with him? 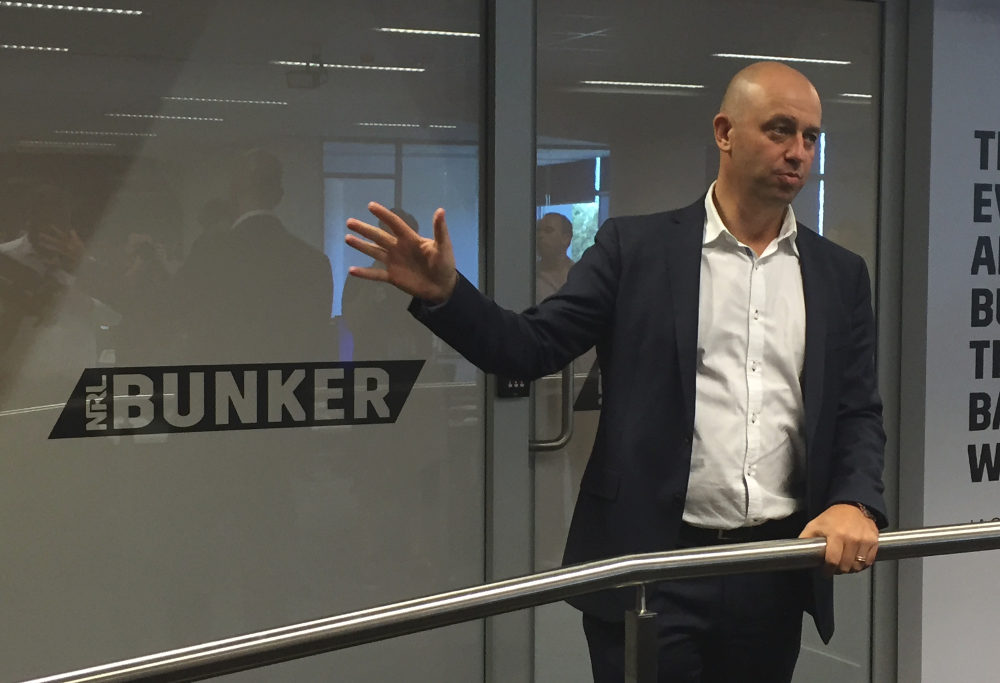 Greenberg needs to step in ASAP, because the inconsistencies perpetrated by referees, Match Review Committees and judiciaries may lead to charges of restraint of trade being levelled against his organisation in court.

Rugby league is no longer the part time game it was in the 1980s. It is a full-time professional sport. The broadcast deals are in the billions and the player payments we punters actually know about total over nine million dollars a year per club. It is big business.

The organisation administrating this big business must be professional, smart, effective, consistent and fair.

For all the NRL’s talk of tribunals and judiciaries, they are in no way a legal body. If they are going to suspend a player, they better be damn sure that the processes they’ve followed were clearly set out and followed fairly and consistently.

If they don’t, they’ll once more inevitably consign the game to lawyers at ten paces, like we had during the war between Packer and Murdoch for control of the game in the 1990s. We all remember what damage that did to the game we love.

However, if I was the CEO of a club that had a vital player up on a high tackle charge at a crucial point in the season, I’d be thinking very hard about fighting any subsequent suspension in court on the basis of restraint of trade, based on the precedent the MRP set in saying Gallen had no case to answer.

When Paul Gallen runs out onto Suncorp Stadium this coming Friday night to play his 300th game, he won’t just be booed by the Lang Park faithful because he’s a New South Welshman they love to hate, it will also be because their own Joe Ofahengaue will be sitting out up to five games for an offence that wasn’t that much worse than the one Gallen perpetrated.

His avoidance of punishment is because of scared referees, caused in turn by their blamestorming boss, and compounded by an inconsistent Match Review Committee.

Take a bow, the lot of you.