After the Wallabies vomit-inducing display during the first Bledisloe Cup Test in Sydney, it looked like only one Tom Petty song would sum up their 2017 – Free Fallin’.

With the great man of Gainesville now sadly departed, another tune is providing the soundtrack to their long, slow crawl back to respectability – Learning to Fly.

We will be able to draw our own conclusions on how successful this crawl has been on November the 25th, at the full-time whistle of the Scotland Test at Murrayfield, but if they’re looking for inspiration for this end of year run they can do worse than reflect and gain insight from the last multi-game stretch where it seemed like they were flying, the 2013 Spring tour.

The catalyst for this enjoyable stretch was a high-scoring, free-flowing Bledisloe encounter under the roof in Dunedin (sound familiar?) which put some belief back in the team after the horror show of a Lions series, assassination of Dingo, idiocy of O’Connor and the annual pummeling in Sydney.

Enter Ewen ‘Link’ McKenzie, last spotted on October 18th 2014 at Suncorp Stadium before his shameful, disgraceful and deceitful casting off to rugby Siberia, the memories of the Reds 2011 Super Rugby title seeming like something from the black and white television era, not something that had occurred just three years earlier.

The tour got off to an inauspicious start with a close loss to England at Twickenham, where the two blokes with the most punchable faces in world rugby, Owen Farrell and Mike Brown, ran the show.

The Wallaby scrum predictably put up as much resistance as a marshmallow (an annual occurrence at red trousers HQ), but the backline play between Genia, Cooper and Toomua teased glimpses of excitement, a flick-pass here and a side-step there raising the pulses and forcing the classification of the game to go MA15+ in the TV Guide (do TV guides still exist?).

A Test against Italy in Turin was the perfect tonic for the team to get things back on track, with the little resistance offered by the Italians a great opportunity for the Aussies to cut loose and experiment. This did not extend to the national anthems, where the Wallabies hilariously performed their best bored primary school assembly rendition, followed by half the Italian team crying and morphing in to Pavarotti while belting out theirs. To be honest four years later it’s all I specifically remember from the match apart from Honey Badger bagging two. 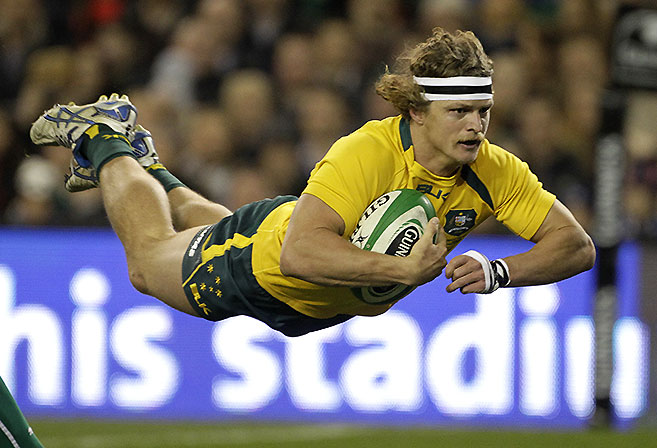 The following three Tests, against Ireland, Scotland and Wales respectively were where Australia truly hit the heights, with the Genia-Cooper-Toomua/Lealiifano (replacing Toomua for Scotland and Wales Tests) axis playing out of their skins, possibly the best those four have ever played. With Israel Folau bossing his first year in rugby, an entertaining tour ended with a roller-coaster victory at the Millennium Stadium.

If the England Test was MA15+ that Wales Test was positively X-rated, and warnings were hastily dispatched to those with high blood pressure or a predisposition towards defensive rugby.

There was even time for a good old session out in Dublin the week of the Ireland Test, although the fallout and suspensions meted out as a result could arguably have sowed the first seeds of rebellion against Link. I can however understand how it happened considering myself or anyone who has ever been to Dublin has rarely escaped with their liver intact.

The uninhibited joy expressed on the field that tour extended to fans watching at home every Sunday morning, and it was certainly one of the most care-free and fun periods I can remember watching the Wallabies, which itself is a damning indictment on the past ten years of stasis.

There was plenty of flying time between Bloemfontein and Buenos Aires, so let’s hope the Heartbreakers were playing loud and the spirit of 2013 manifests itself this Saturday onward.

First Test of the season barely a fortnight away? You know what that means: it’s time to play selector.