Owen Farrell has been recalled for England’s Test against Australia at Twickenham on Saturday after being rested for the autumn opener against Argentina.

Farrell is at inside centre in place of Henry Slade, who drops to the bench, in one of two changes to the backline who had helped to topple the Pumas 21-8.

Jonny May’s recovery from a hamstring strain puts him on the right wing, while Mike Brown’s failure to recover from concussion means Anthony Watson will start at fullback for the first time.

Maro Itoje, also rested against Argentina, must settle for a bench spot, while Joe Launchbury is selected as Courtney Lawes’ second-row partner after the axing of George Kruis.

“I have selected the strongest 23 to play Australia and we will have to be effective in everything we do this weekend to win,” coach Eddie Jones said.

The Wallabies have won their past four Tests and are unbeaten in seven.

Farrell, who acted as water boy against Argentina, will relieve George Ford of the goalkicking duties and be reinstated as vice-captain behind Dylan Hartley for the second of this month’s three internationals at Twickenham.

Watson is viewed as Brown’s successor at fullback and is given the opportunity to press his claim for the jersey, while May is the among the Aviva Premiership’s form players.

Launchbury was unfortunate to miss out against Argentina and profits from a below-par display by Kruis, leaving Lawes to call the lineouts.

“This is going to be a great challenge, as we know Australia have been in great form towards the end of their season,” Jones said.

“The players have had an extremely positive week. They have trained well and worked hard and we are all excited about going out on Saturday and playing well against a very good Australian side.”

Reece Hodge will be named in the Wallabies’ No.15 jersey today replacing injured Tom Banks, with Dave Rennie opting for the Melbourne Rebels utility ahead of James O’Connor. The selection for Saturday’s match against Argentina is sure to revive memories of last year’s Rugby Championship, where Hodge was Australia’s goal kicker. Twice he failed to […] 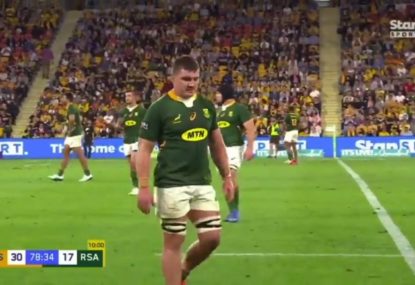