We are at the Melbourne Cricket Ground to relive the first ever cricket Test between Australia and England in March 1877.

Australia is not even a country at this time and the local team is sometimes referred to as the Combined Colonies XI. Six players have been chosen from Victoria and six from New South Wales and there is a keen rivalry between the two colonies.

There has been much controversy coming into this match. Two of New South Wales’ best players, Fred Spofforth and Edwin Evans, have turned down the opportunity to play in this historic game.

Evans gives the reason as being unable to travel the 600-mile journey from his country property. Spofforth refuses to bowl to any other wicket keeper than his own New South Wales teammate, Bill Murdoch.

The Victorians are steadfastly supporting their own keeper, Jack Blackham. Spofforth’s decision has not gone down too well in Victoria.

The biggest condemnation has been for Victoria’s Frank Allan. His explanation of needing to attend the Warrnambool show has been roundly criticised in the press.

England are missing their inspirational wicket keeper Ted Pooley, who has been left behind in New Zealand after a late night drunken brawl sparked by a gambling debt.

His place goes to part-timer John Selby who will stand in a kind of deep leg-slip position to get a better – and safer – view.

This is how the blog will work. Each day’s play will be presented like a standard live blog, however, for readability purposes, it will be very much abbreviated and is meant to be read from top to bottom.

To give our ghost blog some colour, The Roar has sent in its own commentary team to Melbourne; Mo Stache (Mo) from New South Wales, and Veronica Blake (VB) from England.

They have been training in Morse code and the broadcast will be made via the exciting new medium of the electric telegraph.

Without further ado, we will take you out to our team in the commentary tent at the Melbourne Cricket Ground. 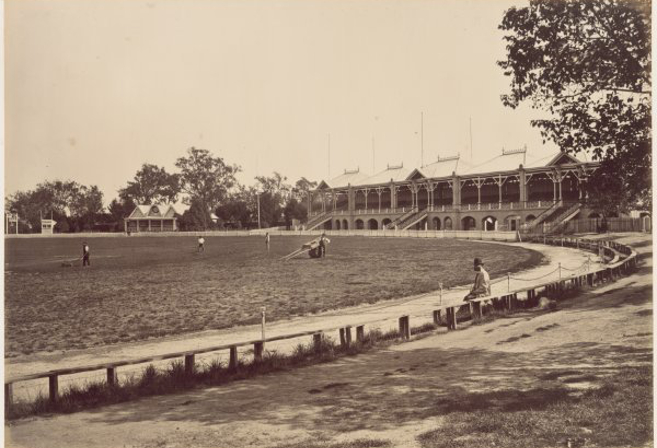 We’re set to get underway here at the home of ‘football’ – whatever that is. Photographed by Charles Nettleton.

Mo: Welcome all to today’s ghost blog. The weather is fine with a cool breeze. I can confirm the team lists for this historic match;

David Gregory for Australia has won the toss and will bat first. Are you excited, Veronica?

VB: Of course I am Mo. Did you happen to pass by the betting tent today?

Mo: Indeed I did and I can tell you that England are hot favourites at three shillings to two

VB: Let me see those betting stubs. England to win! Not so patriotic Mo?

Mo: Of course I’m patriotic – I would never bet on a team containing Victorians. Here come the players.

VB: We are about 20 minutes late but England comes out to hearty applause. Next out are the Australian openers, Charlie Bannerman and Nat Thompson, and listen to that cheer.

This is going to be something else folks. Bannerman will take strike. Shaw will open the bowling for England from the Eastern end.

And the very first ball of Test cricket is … cut by Bannerman! It’s only a single but it is greeted like the fireworks on New Year’s Eve.

Mo: Now Hill bowls to Thompson, BOWLED him! Clean bowled! Thompson out for one and Hill takes the first wicket in Test cricket!

Horan comes out to loud cheers.

VB: Shaw to Horan. Cuts for FOUR. The first boundary in Test cricket goes to the man born in Dublin, Ireland.

Mo: Horan and Bannerman have moved the score along to 40. Lillywhite has changed Shaw to bowl into the wind and he’ll look to pitch into some of the footmarks near the off stump.

Shaw bowls to Horan and he’s OUT! It looks to have hit one of those footmarks. Well, Horan’s making a show that it did.

The ball bounced, took the glove and dollied up to Hill at slip. David Gregory is the new batsman.

VB: Gregory pushes to the onside and takes off for a quick single but Jupp pounces and throws down the stumps – OUT! Gregory is run out for one! What a disaster for the home team!

And that is the lunch break. Geez, they’ve only been on the field for an hour. It’s been a great session with Australia looking good until losing those two quick wickets. Join us in half an hour for the resumption when BB Cooper will join Bannerman at the crease.

Mo: Now the players have finally taken the field again. The scheduled half hour lunch has taken well over 45 minutes. No one is in that much of a hurry.

The crowd has built up nicely, About 4,500 in the ground now. Hardly any of these cheapskate Victorians are sitting in the grandstand I notice.

VB: BB Cooper looks nervous and takes off for a dangerous single but Jupp’s throw is off target and Cooper is lucky to survive.

Mo: There has been some great fielding by England today. Emmett and Ulyett, in particular, have delighted the fans.

It’s Shaw to Cooper now and a fast one has struck him on the hand and he is down. It seems Cooper wasn’t wearing gloves – silly sod. Now he calls for some.

VB: Australia have all the running now. Shaw to Bannerman. Straight drive for FOUR. Beautiful shot. That’s the 100 up for Australia and don’t the crowd just love it.

Mo: Bad boy Tom Armitage has been brought on to stop the rot. Let’s see if he can extract any spin. Bannerman smacks it for FOUR. Ten runs off Armitage’s first over.

VB: Armitage continues to Cooper and bowls a grubber. Nice one Armi. He follows it up with another grubber. My goodness, I think the bad boy has left his bowling skills on the ship.

The convicts, err, the colonials, are well on top now.

Mo: Southerton now to Cooper and it’s BOWLED him! Midwinter the new batsman.

VB: Bannerman is getting close to his century now. He lofts this one and Shaw is making ground, he dives and… spills it! The crowd breathes a sigh of relief. Bannerman in the 90s now, don’t blow it Charlie.

Mo: Southerton to Bannerman. He drives for a single and it’s a century to Charlie Bannerman! He gets a huge standing ovation. The first century maker in Test history and hasn’t he done it in style.

VB: Southerton to Midwinter. And Midwinter lofts this high into the leg side. Ulyett runs back, gets to the fence, leans over and plucks the most remarkable catch I have ever seen!

Huge applause for Ulyett, Ned Gregory is next up.

Mo: Lillywhite to Gregory. Gregory lofts to the onside and is CAUGHT by Greenwood!

Ned Gregory scores the first duck in Test cricket and this is a good fight back late in the day by England.

Blackham is the new man.

VB: Shaw to Bannerman. Charlie pushes it back to the bowler and that is stumps on the first day.

Tune in tomorrow at 12 for day two of the first ever Test match. So it’s goodbye from me.

Mo: And goodbye from Mo.

The Ashes! Say it loud and there’s music playing! Say it soft and it’s almost like praying. The world turns, we grow old and bitter, but when the Ashes come round we are reborn like the meadow in springtime. We have talked and written and pondered and mulled and argued and pontificated and predicted and […] 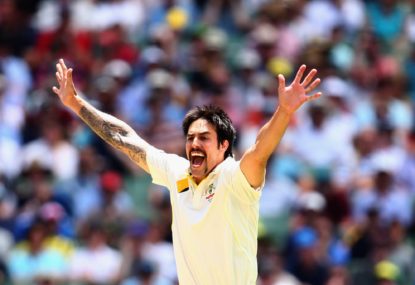 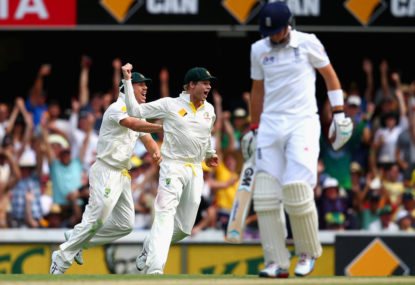 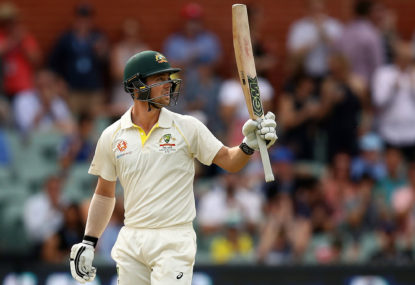