Is there anything Australian cricket fans revere more than a great bowler? I’d argue not.

Down the years, they have been a hallmark of all the great Australian sides, and rarely have they been as prevalent as in the Ashes.

From Fred Spofforth’s match-winning haul in the match that gave birth to the rivalry as we know it today back in 1882 to Richie Benaud’s heroics at Old Trafford, from the pace and fire of Lillee and Thommo to the sheer brilliance of McGrath and Warne, great Australian bowling performances have so often coincided with our meetings with the Old Enemy.

More’s the pity for England.

But while the standout individual performances of the likes of Spofforth and Benaud are extraordinary, they aren’t quite the same as seeing a bowling duo destroy the English together. Nothing unites Australian cricket fans like a bowling partnership destroying the wickets of English batsmen in tandem, as we’ve seen with McGrath and Warne, Johnson and Harris, Lindwall and Miller and, perhaps most of all, Lillee and Thomson.

And so, with the Ashes upon us for another year, it’s time to look back – in no particular order – at three of the greatest bowling partnerships Australia has ever unleashed in the Ashes.

Where to start with McGrath and Warne? Arguably the greatest bowling duo ever produced by Australia – and without a doubt if you limit it to just the past 30 years – the two tormented England time and time again.

They never lost an Ashes Test on home soil, and the only series in England to go the hosts’ way when both Warne and McGrath were in the country was the memorable 2005 contest. That series saw only a bit-part contribution from McGrath after infamously stepping on a cricket ball and rolling his ankle minutes before the start of the second Test. In the one match prior to his injury, McGrath had dismantled England, taking 9 for 82 at Lord’s.

Together, Warne and McGrath took 1001 Test wickets, but so often they saved their best performances for the Ashes. Their three most successful Tests as a duo all came against England, with the aforementioned 2005 Lord’s Test also coming in at number six on that list. While Warne sits atop the list of leading Ashes wicket-takers with 195, McGrath is next with 157.

The numbers, put simply, are astounding.

Then there was their ability to dominate key batsmen in the English line-up. Michael Atherton averaged seven against Warne and was dismissed 19 times in just 17 Tests by McGrath. Warne claimed Andrew Strauss’s wicket eight times, including bowling the opener to claim his 700th Test scalp on Boxing Day, 2006. Nasser Hussain enjoyed a woeful average of nine against McGrath, while the beanpole quick claimed Alec Stewart’s wicket on ten occasions.

But individual statistics don’t tell the whole story of this simply outstanding partnership. The two, from a bowling sense, were alike as chalk and cheese. While Warne’s bag of tricks were as varied as they were lethal, McGrath’s wickets so often came from persistent brilliance, from hitting the same line and length time and time again.

In isolation, both are all-time greats of the game. Together, McGrath and Warne were nigh on unstoppable, combining for some of the most memorable moments in Ashes history. 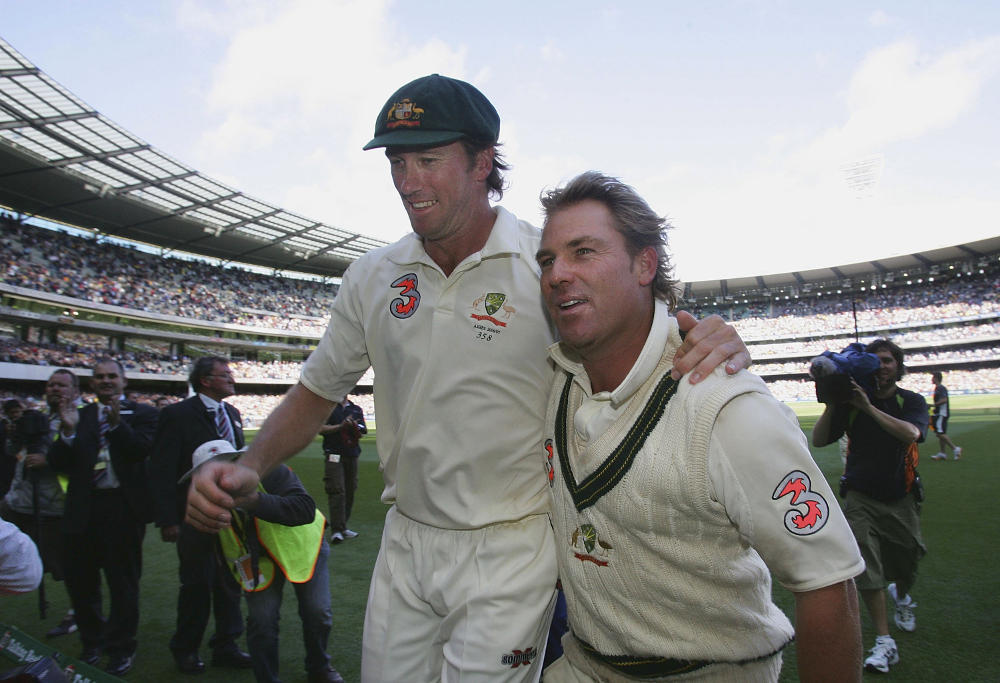 Perhaps the most astounding was the Adelaide Test against England in 2006, a match Australia had no right to win. The two could only muster a single wicket in England’s mammoth first innings, but with a draw looking certain on the final day, Warne was outstanding, bowling with a brilliance not done justice by his figures of 4 for 49.

Warne triggered the collapse before McGrath finished off the innings with the final two wickets, and Australia went on to win the unwinnable Test and complete a 5-0 series whitewash.

It’s always hard to evaluate players you never saw play, but such is the record of Lindwall and Miller that it is impossible to leave the duo off this list.

The two played a significant part in Australia’s post-World War II success, opening the bowling and collecting 243 wickets together. Only Glenn McGrath and Jason Gillespie have formed a more lethal new-ball partnership for Australia.

Lindwall and Miller were markedly different bowlers. Lindwall by all reports was the faster of the two, relying on rapid outswing to trouble the batsmen, while Miller would get the ball to move in, whether through the air or off the pitch.

While Lindwall’s shorter height and lower action would lead to skidding, angling deliveries, Miller’s six-foot frame allowed him to garner sharper bounce off the wicket.

That contrast was just as evident off the field as on it. The two were great mates, but while Lindwall was a much-respected, reserved, church-going man, Miller was a far more exuberant, extroverted character who frequently earned the ire of officialdom – and Don Bradman.

Were he playing today, there’s not a doubt in the world we’d be happy to overlook Miller’s extravagant lifestyle. With his Test bowling and batting averages sitting at 23 and 37 respectively (and a first-class average with the willow of 49), he remains the finest all-rounder ever to don the baggy green.

Together, Lindwall and Miller enjoyed constant success against England, but never more than in the famous ‘Invincibles’ tour of 1948. The two combined for 40 wickets during the Tests in England that year, Lindwall claiming 27 at an average of under 20 and Miller the other 13 at a tick over 23 despite a persistent back injury that remained from the war.

There was hardly a shortage of highlights for Australia that tour, but Lindwall’s role in setting up the comprehensive innings victory in the final Test is right up there.

England were skittled for just 52, Lindwall taking advantage of a damp pitch with a phenomenal post-lunch spell of 5 for 8 off 8.1 overs. He finished the innings with six scalps – and took nine for the match – and his performance earned comparisons to those of Harold Larwood during the Bodyline series.

As for Bradman, he simply described the spell as “the most devastating and one of the fastest” he had ever seen in Test cricket. 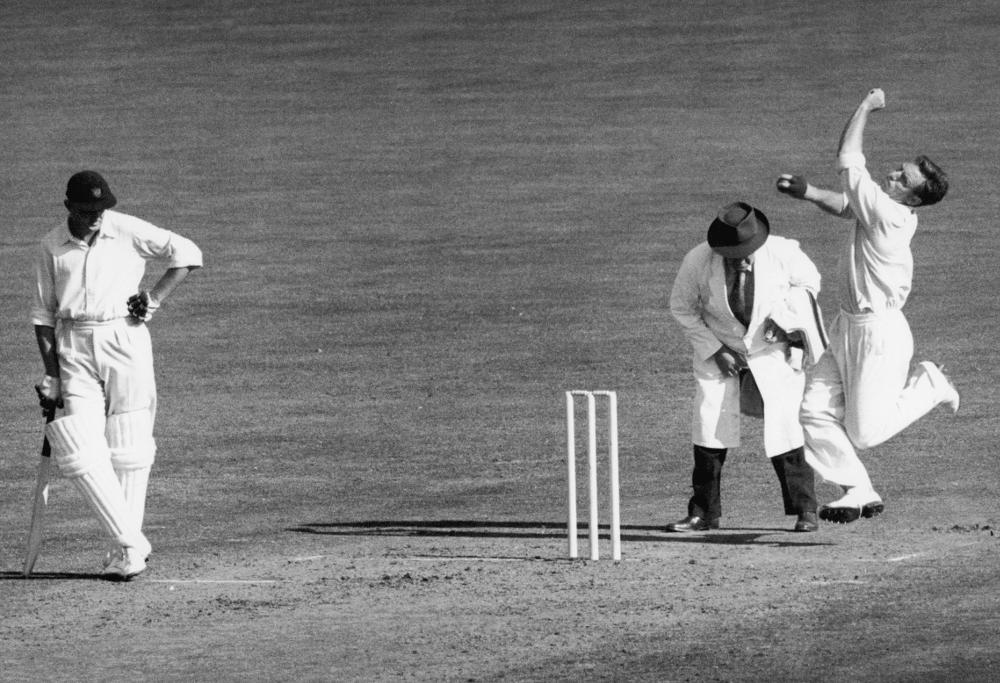 Ashes to Ashes,
Dust to dust,
If Lillee don’t get you,
Thommo must.

Yeah, this was an easy one to pick.

No duo can match the legendary nature of the Dennis Lillee-Jeff Thomson partnership from that famous 1974-75 Ashes series, and for good reason.

The pair’s stats from that summer are simply terrific. Fifty-eight wickets between them, Thomson with 33 and Lillee 25. Thomson’s average (17.9) and strike rate (42) were simply outstanding, while Lillee’s (23.8 and 58 respectively) weren’t exactly shabby either.

But those numbers can’t capture the legacy Lillee and Thommo have left behind, nor the fear they struck into the hearts of England.

“Never in the 98 years of Test cricket have batsmen been so grievously bruised and battered by ferocious, hostile, short-pitched balls,” was how Wisden described Thomson’s efforts during the series.

Mitchell Johnson’s demolition job in the 2013-14 Ashes is as close as we’ve seen to someone recreating that fear in a modern series, but with helmets now common and protective gear so far advanced compared to what was available in the 70s, we’re unlikely to ever have a true repeat of 74-75.

Johnson might have snapped Michael Carberry’s bat in half, but he never quite managed to replicate what Thomson did to poor old David Lloyd.

No Australian will ever get tired of that tale.

So battered and bruised were England by Lillee and Thomson (mainly Thomson) that they ended up calling up 41-year-old Colin Cowdrey to their squad. So eager were the Australian crowds for more that they broke into a chant of “Kill, kill, kill” in the Sydney Test when Thomson and Lillee had the ball.

Taking 58 wickets as a duo is exceptional, but not unheard of. But the awesome, fearsome nature of Lillee and Thommo back in 1974-75 is something we’ll be lucky to see again.

Unless you’re a batsman.