A sorry state of affairs at St Kilda

I watched the football on the weekend with a St Kilda supporting friend: Matthew, the poor fella.

And that’s how he conceded defeat while Melbourne were still in the race of Etihad Stadium, before the first bounce on Sunday.

Can we blame him? I did. Come on, this was the game where we would really see where St Kilda were really at. Lining up against a team that started their ‘rebuild’ at the same time, at a venue that has not always been friendly to the Demons.

Then again, maybe my long-suffering friend had a point. His beloved Saints have scored over 75 points just once this season, poor form even by the “rapidly declining standard of the game” as it stands in 2018.

Maybe things just felt a bit off: in gorgeous Autumn sunlight in Melbourne, the roof was closed as if to shut out any hope of a St Kilda resurgence.

Or maybe, he is just unfortunately realistic.

Quick to dismiss his own assertions as nothing more than nervous cynicism, we both filled with hope as some sharp ball movement and quick thinking from the Saints’ raging bull Jack Steven saw a clean delivery on to the chest of Paddy McCartin. Then came the commentators’ chance to feed off the collective apprehension of a St Kilda set shot.

They’d mused for the past half an hour in the pre-game about St Kilda’s woeful conversion in front of goal, and the contagious effect of inaccuracy. So, the fact that not just any player, but the much-hyped number one draft pick, key forward, halo-wearing would-be-St Kilda saviour would have the chance to right the wrongs with a set shot and nail down the first goal of the game was just perfect for the theatre of it all.

Naturally, he pulled it left and the Saints had 0 goals, 1 behind.

We laughed with a dreaded sense of déjà vu.

Big Paddy missed another before small forward Jade Gresham was quick to pounce inside 50 and got the Saints on the board with a major soon after. There were some promising signs, the ball was being moved quickly and the Saints were looking to attack.

Gresham then took a mark 35 out and kicked it out on the full. To quote Brian in the commentary box, it was all “an extraordinary jack off.”

Meanwhile, Melbourne kicked into gear and started playing football reminiscent of their third quarter against the bombers. Unrivalled pressure and speed saw the Demons kick 4 quick goals, but the Saints rallied, and in the face of Melbourne’s pressure, upped their own.

Jimmy Webster sprinted back bravely in the back pocket to affect a spoil and force the ball out of bounds, preventing a certain goal. Maybe things weren’t all bad.

The second quarter started with another three behinds, before Tim Membry slotted a set shot, perhaps putting to bed, however briefly, memories of last week’s goal square farce. All the while, Melbourne managed another three, and St Kilda struggled their way to halftime 28 points behind. 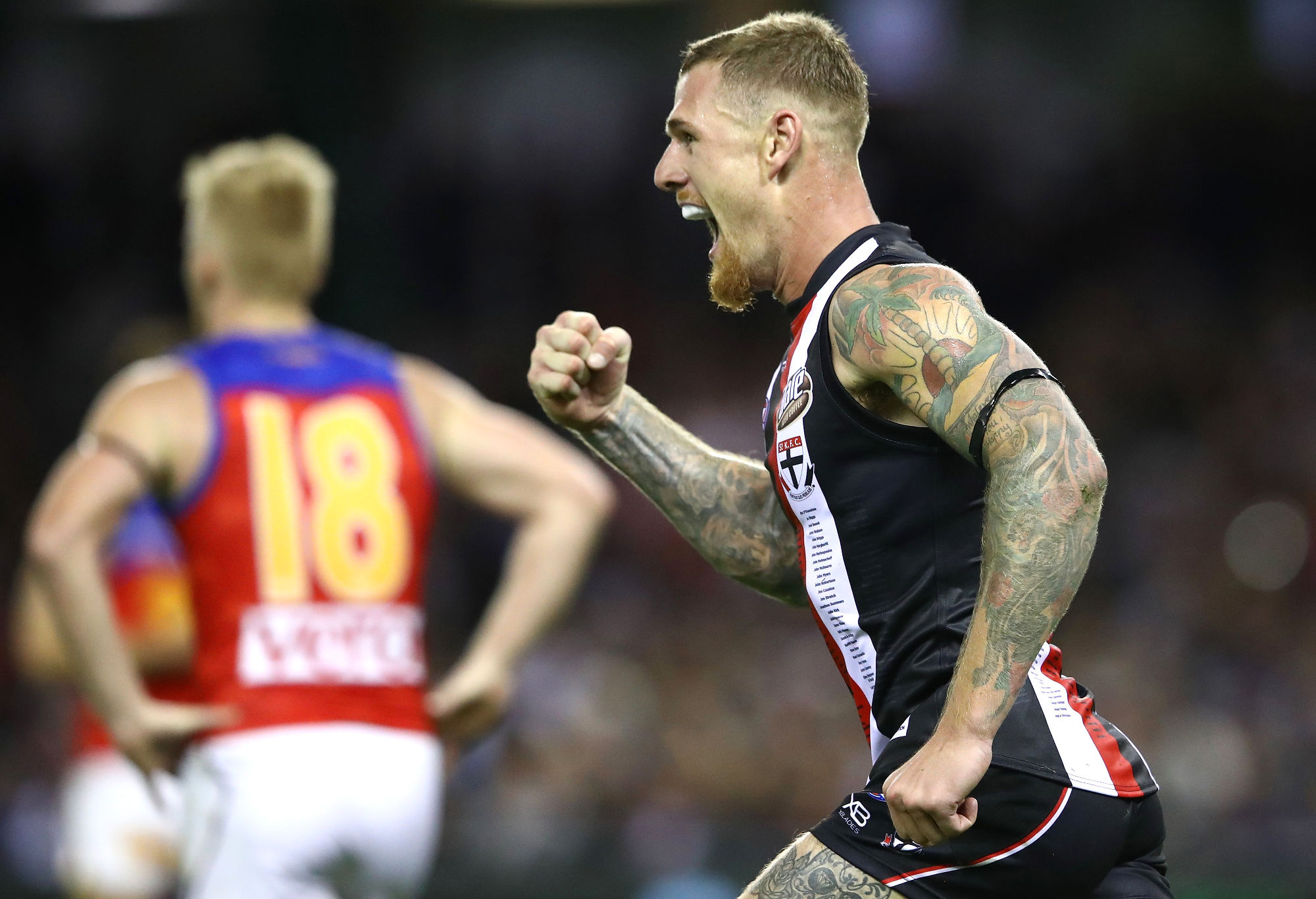 Two beers down as he was at this point, Matthew’s pre-game ruminations were looking more accurate by the minute; for whatever progress St Kilda made, none of it seemed easy or free-flowing. Their play had begun to stagnate, and efforts to use the corridor for quick and attacking movement were characterised by inefficiency and errors in execution.

Where possession was turned over, there appeared a swathe of blue jumpers, and the ball was snaffled up and shared about between them.

Two quick goals to start the third quarter and maybe the Saints were a chance? Just enough to keep us interested, before Melbourne appropriately put a run on, enough to shut the door and see the TV turned off. Again.

Alan Richardson describes his side as “being in a hole” at the moment. Maybe they were in a hole four years ago, one which has seemingly turned into a bottomless pit, that is both seemingly impossible to get out of, and insufferably difficult to watch them try.

Jack Steven and Seb Ross are impressive. Their effort, passion and fervour characterise the attitude of leaders of any team – especially one that is currently hampered by inexperience. To a neutral supporter, it feels like they are having a real crack, but their problems are too many and varied to overcome.

Their struggles in front of goal are nigh on laughable and significantly deflating. They don’t have a consistent defensive structure, which allowed Melbourne, on multiple occasions to find far too much space on the attacking side of the centre circles, and they lack flair or variation out of the middle.

At the moment, it seems we can all but draw a line through their hopes of finals or even matching their 11-win 2017 season. Rebuild or otherwise, St Kilda are struggling to find any semblance of form at the moment, and it seems to warrant a bit more than an “ah well” from those down at Moorabbin.