ORIGIN 1 RESULT: NSW Blues youngsters just too good for Queensland at the MCG

The New South Wales Blues have started State of Origin with a win for the second year in a row, defeating the more experienced Queensland Maroons in Melbourne 22-12.

It was a superb multi-phase try which sealed the match for the young Blues, the outstanding James Tedesco breaking down the field, fending off tackles before offloading and allowing the ball the find Josh Addo-Carr on the other side of the field, the Melbourne flyer tip-toeing the sideline and touching down for the match-winning four-pointer.

In truth, it was an excellent second-half turnaround for Brad Fittler’s men. After the Blues headed into half-time with a two-point lead, Queensland started the second period the better of the two teams, Dane Gagai putting aside any fears over his fitness by reaching out to grab an inch-perfect grubber from Ben Hunt and open the scoring for the half.

Valentine Holmes then nailed the conversion from the sideline, belying his status as a back-up goal-kicker to stretch Queensland’s lead to four points. 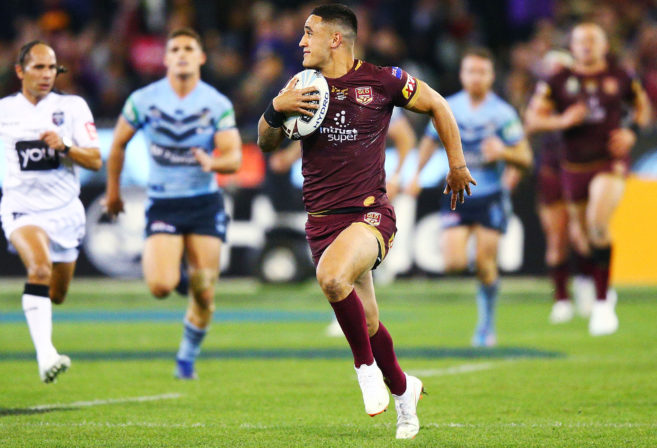 After conceding the first try of the second half, the Blues struck back twice in quick succession. First it was bullocking centre Latrell Mitchell forcing his way over the line to tie the scores up at 12 apiece, James Maloney unable to convert from a kickable position.

Not long after, Tedesco broke into the open field and, while he was brought down by a crunching Michael Morgan tackle, it provided the platform for an excellent high kick from Maloney. Even though it was Holmes who rose highest to get first hands on the ball, it was snatched away by a high-flying Tom Trbojevic who crossed to give NSW a six-point lead.

The Blues played the entire game with a composure that concealed the fact they had a whopping 11 debutants in the side. While experienced heads Tedesco (who was awarded the man of the match award) and Maloney were outstanding in the victory, young halfback Nathan Cleary played superbly for someone making his first appearance on the Origin stage, rubbishing any pre-match concerns some supporters may have had about blooding the 20-year-old with the Blues too early.

Fellow debutants Damien Cook, Addo-Carr, Mitchell and Trbojevic all had excellent games as well, although there was hardly a poor player for the New South Wales. 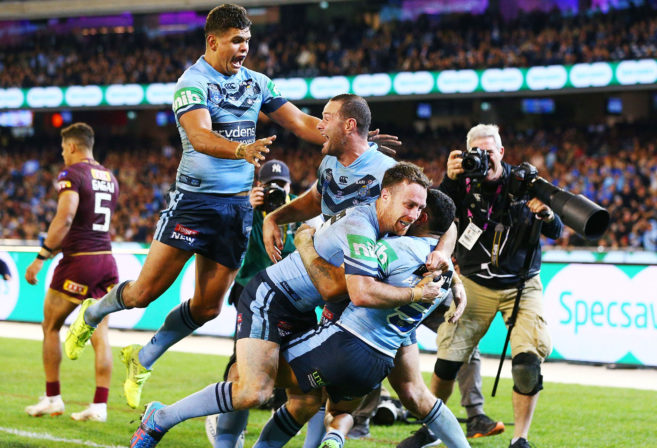 As for Queensland, new skipper Greg Inglis had an immense performance on his return to the Origin arena, laying savage hit after savage hit on a number of hapless New South Wales runners. However, the side clearly missed the experience and all-round class of retired trio Cameron Smith, Johnathan Thurston and Cooper Cronk, and injured fullback Billy Slater.

Earlier in the game the Maroons were the stronger starters, beginning the match with excellent field position as the young Blues took time to find their feet.

But after James Maloney nailed a point-blank penalty with ten minutes gone on the clock to open the scoring for 2018, Damien Cook showed why the Blues had to pick him by making a half-break, releasing Maloney who in turn put James Tedesco in the clear for the first try of the series.

A period of domination followed for the Blues after they opened up that 8-0 lead, but that changed when Holmes raced away to score a much-needed intercept try for the Maroons after grabbing a loose pass from Maloney.

And while the Queenslanders finished the half stronger than their opponents, they were unable to score again before the sides headed in for the half-time break.

The series now heads to Sydney’s ANZ Stadium, which will host Game 2 on Sunday, June 24.