Rugby league is snubbing the entrepreneurs and chancers who created it

Both of them are in the sport 110 years later but face massive challenges, even though the Dragons played in the 1995 and 2000 World Cup semi-finals and the Kiwis were ranked first in the world for a couple of years very recently.

Their situations are very different but their problem is the same – a lack of money.

In 1907-08, international competition seemed to be the way forward for the 13-year-old Northern Union. They had been isolated for so long and now they had a foreign team to play against, the sky seemed to be the limit.

But the ‘All Golds’ seeded the game in Australia on their way to and from Britain and Sydney soon became the game’s mecca. Australia and Britain, who had robust club competitions supported by a rebellious working class, ensured the sport became club-focused.

The Welsh and the Kiwis always seemed to be on the outside looking in.

It’s worth remembering that Albert Baskerville was a post-office clerk who clandestinely signed up All Blacks for a professional tour before we pass judgement on the Kiwis’ next big match, against England at Denver’s Sports Authority Stadium at Mile High in just under two weeks.

At the heart of NRL clubs’ resentment of the fixture is that a private promoter, Jason Moore, is getting access to players they consider to be theirs, even when on international duty. Yet rugby league largely owes its existence in Australia to one such man.

Rugby league is a sport of ‘chancers’ – and the chancers currently control the loot don’t want any new chancers to buy their way in through the cut-price back door of international competition. It’s perceived as sneaky; rugby league was built on sneakiness.

This is pivotal moment for the Kiwis.

As colleague Brad Walter points out on NRL.com, while England players have been vocal in their support of this match, the Kiwis have been strangely muted.

Their captain was filmed using cocaine a year ago, they lost to a second tier nation for the first and – straight away – second times in their history during last year’s World Cup and they have a new coach trying to install what must be, at least partially, a new culture.

There’s a new CEO, too and players who are eligible for other Pacific countries seem to prefer playing for those countries.

At the time of writing New Zealand had not named a team for the trip to Colorado while England’s squad is strong. It’s going to be an intriguing Kiwi list; over the past 15 years the players have seemed to have way more influence over what happens in black than they do in green, gold, red, white or blue.

Wales is an even sadder fall from grace – last year they beat England at Under 16s level but according to WRL chairman Brian Juliff, the Rugby Football League – charged with running rugby league in the entire United Kingdom – gives them just Stg25,000 a year.

No, I did not leave a zero off.

The England team in camp would chew through Stg25,000 in two nights, if not one.

This is the point the NRL clubs need to appreciate before they castigate national teams for jumping at the offers of private promoters – a country which played in the very first Test match gets total funding for a year that wouldn’t play your gear steward.

International rugby league needs to be ‘open for business’ to entrepreneurs just to survive – the last thing it needs is powerful, wealthy clubs not only hoarding the cash but then trying to block it from earning a few pennies of its own. 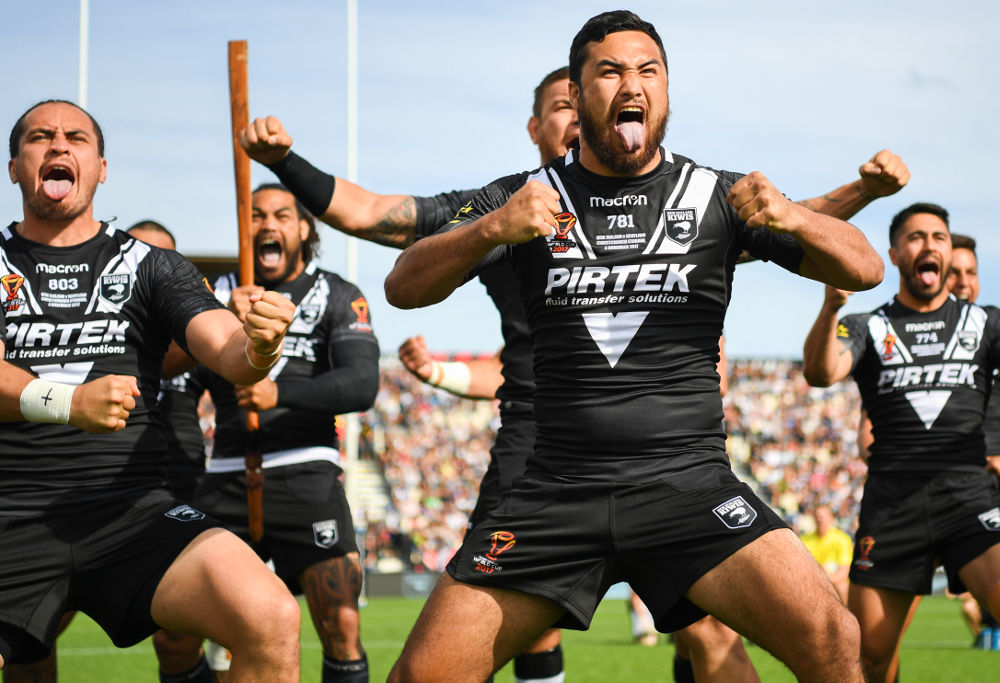 Peta Hiku in the haka for New Zealand. (NRLPhotos/Nathan Hopkins)

International rugby league is only the cut-price back door into ownership of rugby league’s IP because you have neglected it for so long. It’s your fault they’re poor and will go to America for $500,000, a price that you would laugh at. You held them back.

“Sometimes you think you’re banging your head against a brick wall because people aren’t looking at the big picture,” says Juliff, who played twice against the 1982 Kangaroos.

“They’re looking at themselves.

“What I’m trying to say to people is … unless they put more money in, we’re going to lose 100 years of history.”