With the latest Hearthstone expansion – The Boomsday Project – launching earlier this month, we had the opportunity to sit down with senior designer Mike Donais.

In part one of this two-part interview series, we discuss how this set’s mechanics and keywords came about. Check in tomorrow for our discussion on some of the most-discussed legendary cards, as well as the impacts this set has had on the competitive scene.

The Roar: It would’ve been quite some time since you actually were developing this set. Do you remember it being a particularly fun or challenging set to make? What goals, if any, did you have coming into it?

Mike Donais: It was a very fun set to make. One of the things that I’m super happy about is bringing back somebody that people know and love. We’ve done this before with Elise, and we’ve done it with Ragnaros a couple of times. People always seem to love seeing someone that they care about in a different way.

Instead we came up with this new mechanic which we originally actually called modular instead of magnetic.

The Roar: Just backtracking to mechs; they’re obviously back in a big way. Were you always going to bring in a subtype of minion so heavily in this expansion? Was it always going to be mechs? How did that decision come about to bring them back?

Mike Donais: I think the mad science was something that people were always excited about, and sort of the crazy science. That led us to Dr. Boom’s labs.

Then once we got there, it made sense that there would be some mechs. We weren’t sure exactly if there was gonna be a lot of mechs, or new mech mechanic or not, but we started brainstorming ideas and then that’s how mechs eventually became part of the set, we seemed to like the idea.

The Roar: The mech and magnetic combo, for fans it’s a bit of a chicken and egg situation; what came first? Was there an idea that we wanted to have minions combining their powers together and then mechs and magnetic was a good landing place for that idea? Or was it the mechs came in, and magnetic was the thing that followed?

Mike Donais: The story of Dr. Boom and the mechs came first, then we were brainstorming mechanics that made sense. Everybody loved the sort of V-07-TR-0N fantasy of, assembling a bunch of mechs together into one big awesome thing.

The Roar: And so then, onto magnetic – how did that come about? Was was its playtesting process like?

Mike Donais: It changed a couple different times. So, originally it was called modular, then we wanted to figure out if and how it worked.

When you had a modular card and you played it, what happened?

One of the implementations was, when you play a modular card, a choose one popped up – like a Druid choose one – and you could choose if you wanted it to be by itself, or to be a buff.

If you chose buff, you would choose a minion to target and it would go on that minion – which would be a couple of extra clicks. If you chose for it to be itself, it was just, one extra click.

We didn’t like that that was extra clicks, so we playtested it as, if you had a mech on the board, it only played as a buff. So it worked like, you just dragged it out and it was no extra clicks that way, just drag it right onto a minion.

However, we liked the gameplay of having choice out of strategy. We also liked the simpleness of one smooth motion to play it.

So we came out, somehow, with this crazy idea of, how can we get both? And that’s when we came up with; play on the left to attach, and play on the right to be by itself as a new minion.

The Roar: I can imagine during the early days there would’ve been a lot of misplays where people carelessly put them on the wrong side of a minion and having unintended consequences?

Mike Donais: Yeah, first there was no visual effects or audio.

Mike Donais: Then they came on, it became awesome. The electricity going back, like you could drag it around and see the beams sort of connecting to tell you what’s going to happen. Then the sound effects came in to support that and the art, all the mechs that are magnetic have these weird sort of blue beams connecting their arms and legs and stuff, as part of their body.

So it brought it all together, it just made sense. 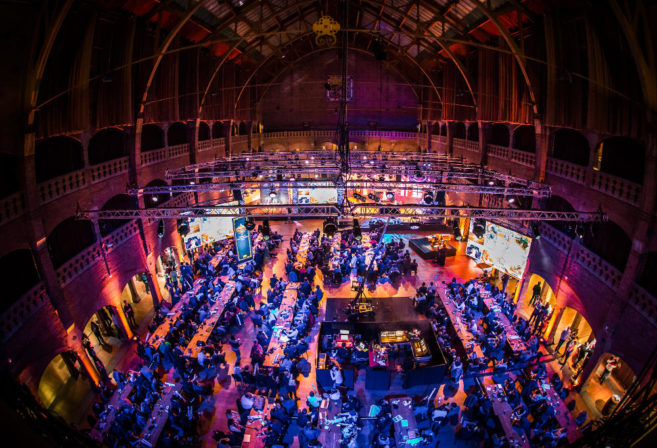 The Roar: That does make sense. So given you were, for all intents and purposes, reintroducing mechs, at least to standard play, and with the new mechanic that accompanies them, did it feel like this expansion you were creating more deck archetypes than normal?

Did it therefore make the set a bit harder to playtest and balance?

Mike Donais: We try to have around two new deck archetypes per class, in every expansion.

In this case, its was mechs for Hunter, Paladin, and Warrior, as one of new archetypes. Sometimes we have one card that produces a third archetype, it’s not like a hard rule, but generally it’s about the same in that case.

The Roar: Let’s talk about some more of the new introductions to this set. Obviously you’ve got the project cards, which are, I think one of the more interesting additions to the set, actually.

What was the thought process behind their creation, and were there any abandoned projects that didn’t end up making the cut?

Mike Donais: Yeah, the thought process was pretty straightforward. We were brainstorming the scientists working in the lab, helping Dr. Boom, and like what kind of things they would do.

And that’s how we thought, ‘well sometimes they’re going to work together’ and those, what we ended up calling projects, where everybody benefits.

We didn’t like how that felt because it wasn’t good against even aggro decks because the aggro deck would just hit you in the face every time.

But with the armour, it turned out to be pretty good against aggro decks because, even if they hit you in the face, you end up with no life loss. 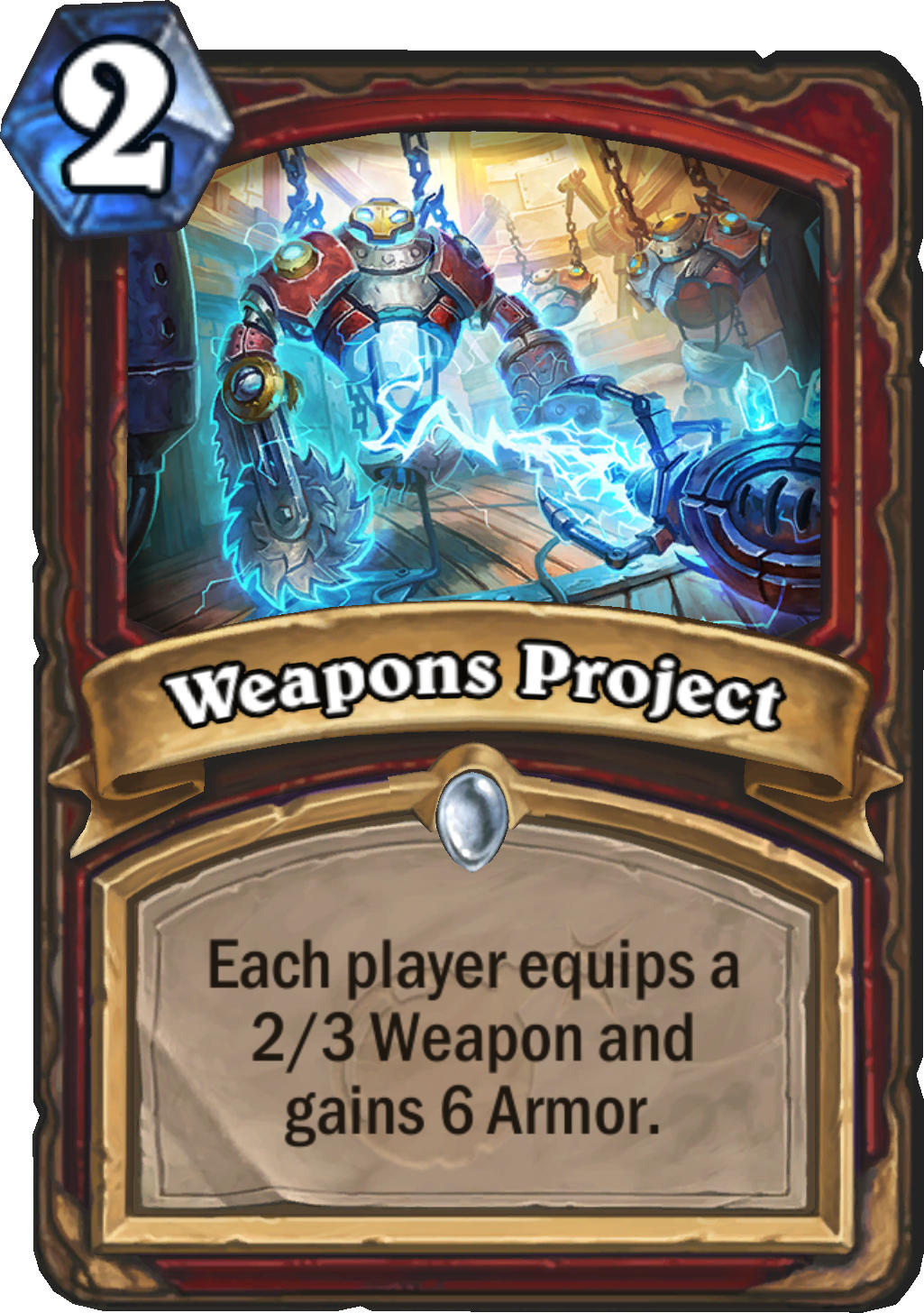 The Roar: It sounds like you guys based on our discussions on The Witchwood as well, you really do think about the theme first, and then mechanics to fit.

Whereas I guess my impression, maybe other’s impressions before was that you would have these mechanics you’re thinking of, then you’d think of themes to go around them.

Is it always a case of thinking of a theme first, then mechanics and cards that will work with that theme?

Mike Donais: It’s a slight mix. We have some ideas on the back burner that we can bring in if they make sense.

Legendary spells are something we’ve talked about for a few years, we were waiting for the right time. So from that perspective it was mechanics first, but it had to be in an expansion that made sense.

The same with hero cards, we had hero cards, and we wanted to for a while, and then when Death Knights [in Knights of the Frozen Throne] came around, it made sense to do hero cards at that time.

The Roar: Just touching on Omega cards; when you look at something like Omega Medic, and you look at its effect, and it sort of strikes you quite obviously as being a Priest card.

Whereas something like Omega Mind, if you sort of didn’t know what class it was, it wouldn’t jump out at you as immediately being a Shaman card.

How do you decide a card will be class specific when it doesn’t necessarily have an obvious hallmark of that class?

Mike Donais: That’s always a challenge for us. One of the things that we struggle against is providing two archetypes for a class in every expansion, without breaking their class flavour too much.

We do have a list of like what class gets healing and what gets area of effect, and things like that. So the Omega card made sense for us, as something that we had done before in Shaman, in a very similar way.

But, it’s always a challenge to do and we look at our list of the flavours for each classes, and the classic cards often break that.

So we have to be really careful when we design new cards, to try to deliver that flavour as much as we can.