We kick off the 2018 finals with the battle of second and third. The Rabbitohs really should have locked up the minor premiership but three losses from their final four games saw them slide to third on for and against.

That means they have to travel to Melbourne and face the Purple People roaring from their green seats. With their cowbell. Because we need more cowbell…

This shapes up to be a cracker of a game.

While the Storm have the edge over the Rabbitohs across most of these categories, there really isn’t very much in it.

The Storm, as we have grown to expect, are leaders across many defensive categories in the NRL. They don’t like to miss tackles or concede metres, line breaks or tries. It is the cornerstone of their game.

However, since the departure of Cooper Cronk to the Roosters their error rate has grown, which in turn puts pressure on all other areas of their game. While the Rabbitohs are by no means a Bellamy-esque relentless defensive machine, their defence is good. And you can be sure they’ll be pushing the Storm’s capabilities to the limits. 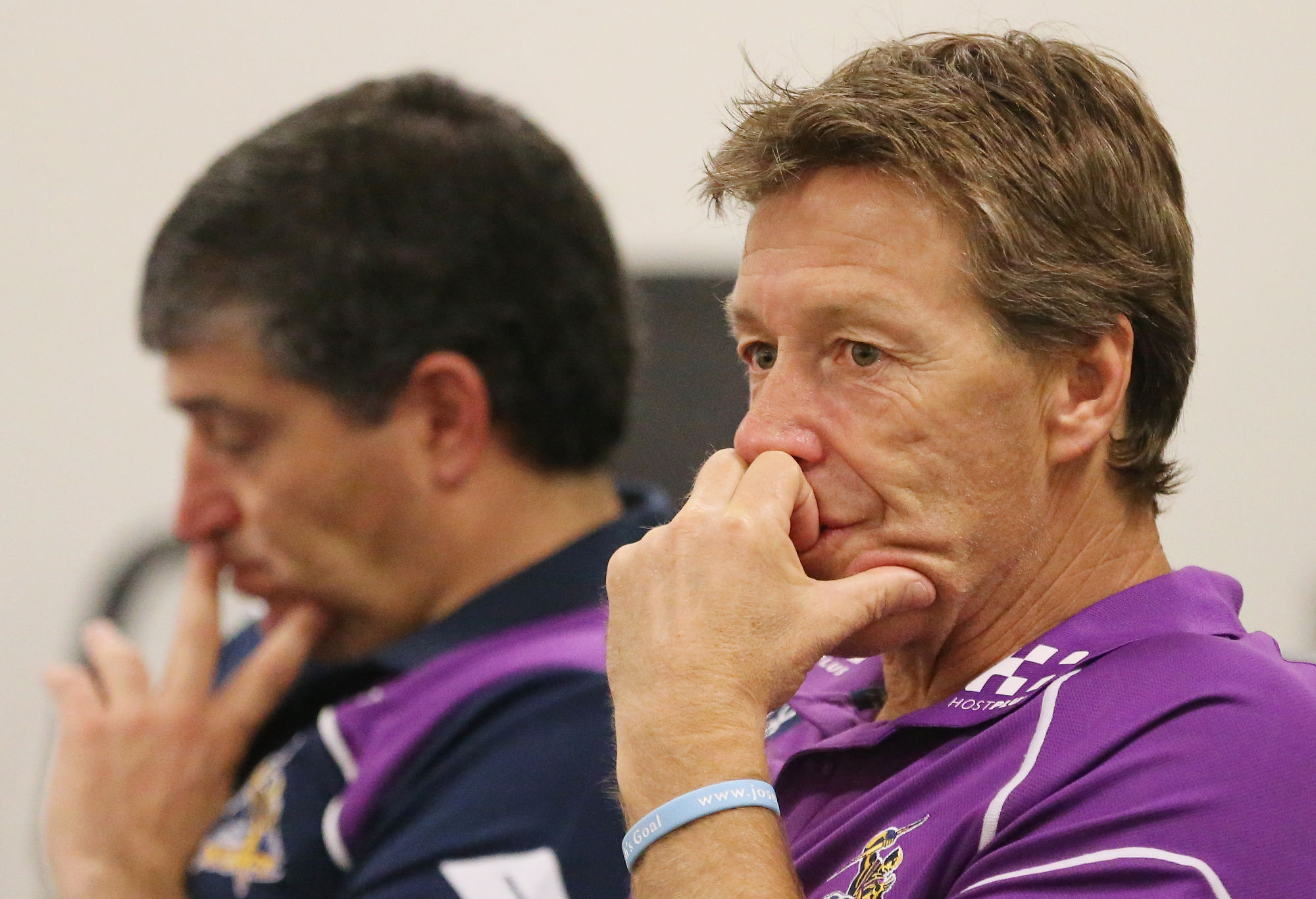 The top four tacklers for both sides gives an indication to their strategies. The Storm have two tackling machines in Cam Smith and Felise Kaufusi who make 30+ a game.

They are supported by seven other players who make 20+ tackles. That’s nine players who carry a big workload. They really spread the workload amongst the team. The Rabbitohs have just six big tacklers in their ranks.

The missed tacklers give an indication of where in the line will be targeted by both sides.

The Storm are going to be sending masses of traffic at Dane Gagai. He can expect a very hectic night indeed. How well he performs in the defensive line will go a long way to deciding this game I reckon.

Similarly, Jahrome Hughes – back in the number seven jersey for the first time since the Storm’s Round 22 loss at home to the Sharks when he missed seven tackles – will have a target on him that the Rabbitohs will be aiming at all night long.

Craig Bellamy will be missing Cooper Cronk’s awesome defence at halfback possibly more than anything the great bent nosed one ever provided.

Sam Burgess and Gus Crichton will concede penalties in this game. So will Cam Munster, and probably Cam Smith too. However, as we know from previous study the referees do not make a habit of blowing the pea out of their whistles come finals time.

When it comes to errors, both sides errors are usually positive attack gone awry, rather than stupid drops in their own red zones.

If the Storm have the edge in defence, the Rabbitohs surely have it in attack. They lead in all categories except penalties received.

In fact, the Rabbitohs NRL-leading stats in attack virtually nullify all of the Storms defensive advantages.

This cancels out points to a very close match indeed.

There are a few very handy tackle breakers lining up in this game. Josh Addo-Carr has blossomed at the Storm and I just love watching Dane Gagai run the ball.

They are respectively supported by the genius of Billy Slater and Damien Cook, Jahrome Hughes and Gus Crichton.

Look at the line break leaders for both sides, they mostly break the line out wide. So the defence of the wingers will be possibly the deciding factor in this game.

The return of Robert Jennings could not have come at a better time for the Rabbitohs. This is also reflected in each teams try scorers.

In regards to metres gained, the Storm have only three players lining up for this game who average over 100 metres a game.

The Rabbitohs will have seven, one of who is the reborn king of the Burgii – Sam. This may be a crucial difference – if the Rabbits get a roll on.

No surprises that the efficacy of both sides halves combinations will hold a large sway over the outcome of this game. Both sides custodians at the back will also need to fire.

The Storm must try and stop Sam Burgess and Angus Crichton offloading or things could go very poorly for them. Easier said than done though. 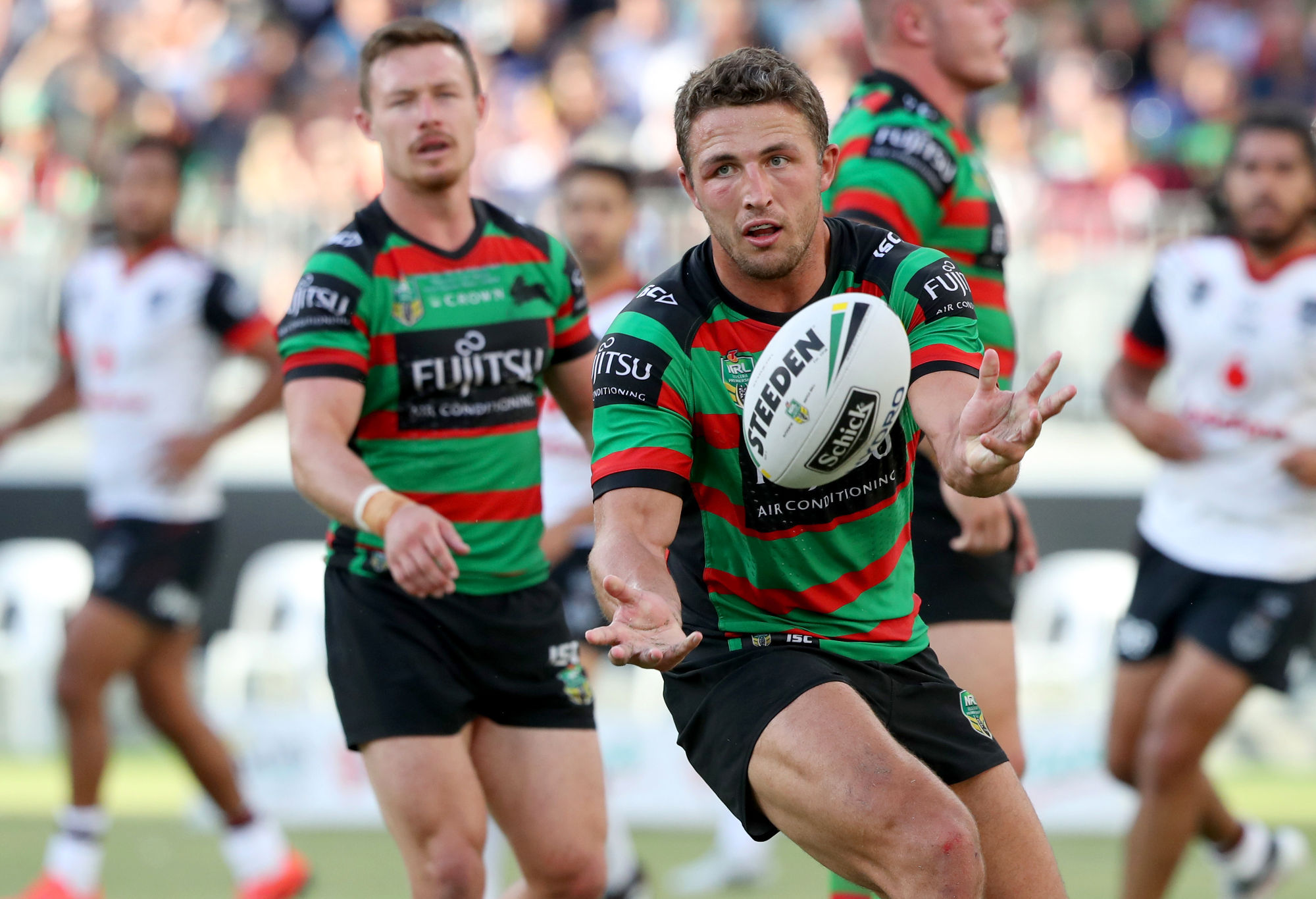 Cam Munster
Remember Origin three 2017 where Cam Munster absolutely went off? He needs to do that for the Storm in this game. He needs to attack and defend like a man possessed.

If he starts to dominate in attack then it could be a very long night for the Bunnies. He needs to be at his running best. We all know he can do it too. 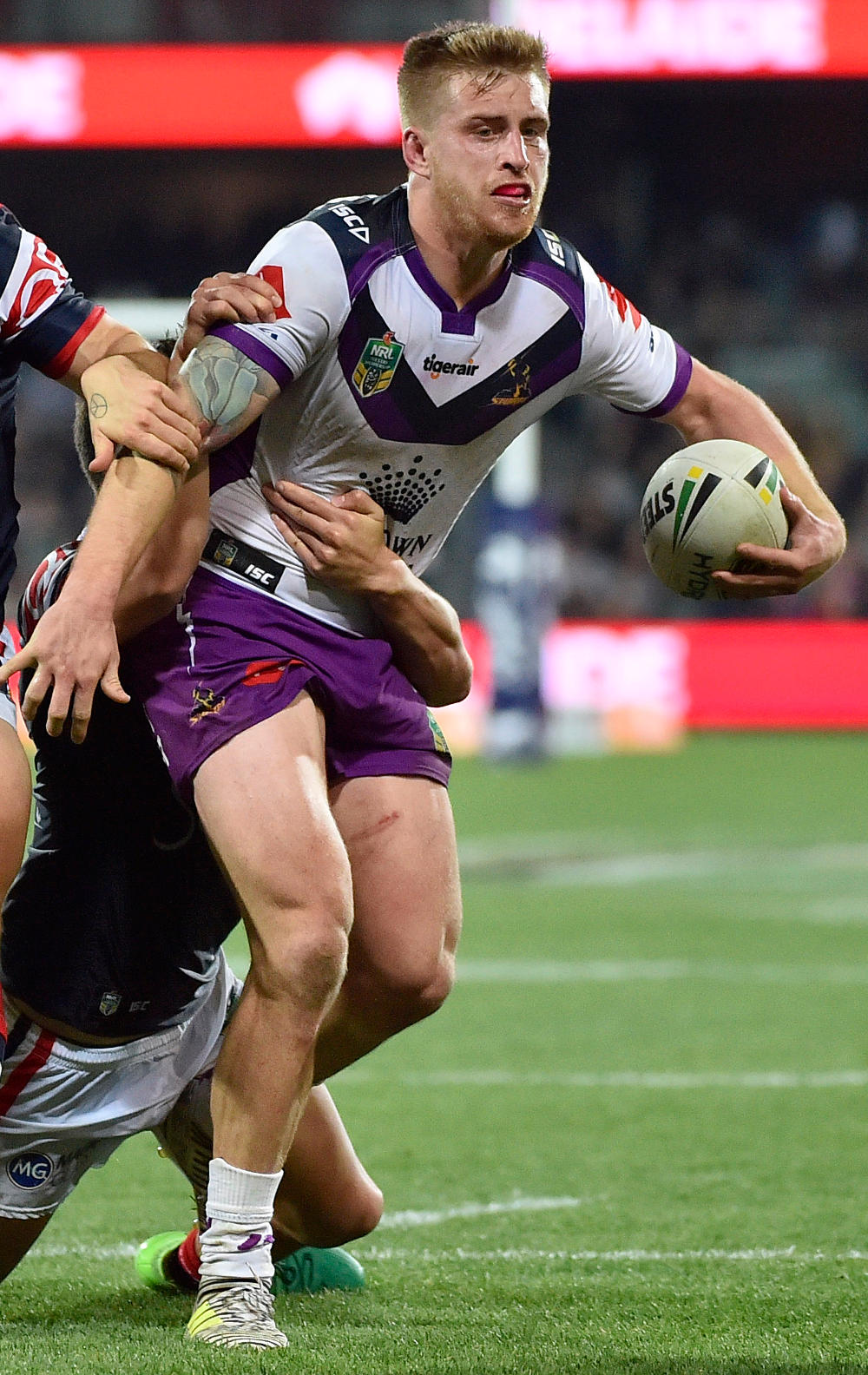 Billy Slater
Slater has been an ornament to the game in the pure attacking skill he has produced for a decade and a half.

He will not be leaving anything in reserve in this game. He’ll be dedicated to going out a winner. That should set off panic alarms for the Rabbitohs.

Jahrome Hughes
The Hughes kid has a lot of weight on his shoulders in this game. His defence simply must stand up to the onslaught that is coming his way.

We know he’s got a lot of creativity and talent. We know he can lay on a line break and a try, and he’s got a point to prove that he should be the Storm halfback going forward. Now’s his time to prove that. And he could well.

Sam Burgess
Big Sam is arguably the form forward going into these finals. There is no question that the Bunnies revival in 2018 has been off the back of the forward drive provided by him and his twin brothers.

He will not die wondering in this game and the Storm must curb his impact if they are a chance of winning.

Damien Cook
How good has this bloke been this year? Lightning fast with great vision and good hands. Not only is he the Bunnies best defender, he’s busting tackles and laying on tries. Cam Smith will be doing his utmost to put him off his game – and to try and keep up! 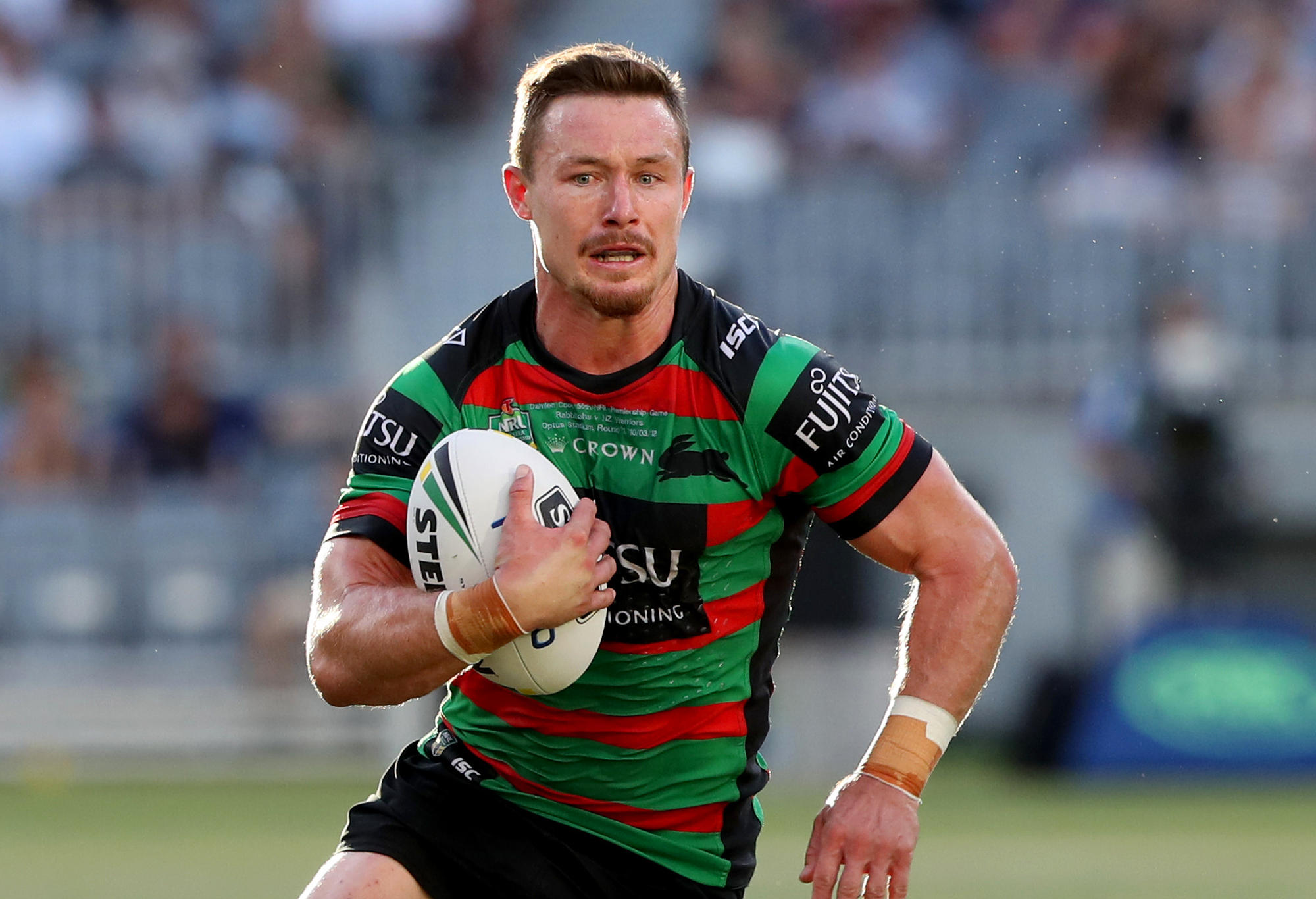 Greg Inglis
Evergreen. That’s Inglis this season. I thought after his knee injury last season that we had seen the best of GI. But this season he has been great.

His performance in the Origin series was outstanding and his leadership and input to the Bunnies has also been excellent.

The injury layoff will see him in great shape to shake the life out of this finals series too.

This will be the Storm’s 557th game since they entered the competition in 1998. They have an amazing win rate of 64.75 per cent.

In Melbourne that win rate increases to 71 per cent. At AAMI Park that increases further to 75.2 per cent.

Having said that, they’ve lost four of their 11 matches at home this season to only have a 63.7 win rate…

This is the Rabbitohs’ 2370th game since entering the competition. The have a 52 per cent win rate.

At this venue they’ve played seven times and lost every last one of them. Their average losing margin is 10.3 to 26.7. However, that’s very much effected by the Storm’s 64–6 flogging of the Rabbitohs last time they met here in Round 25 of 2017. 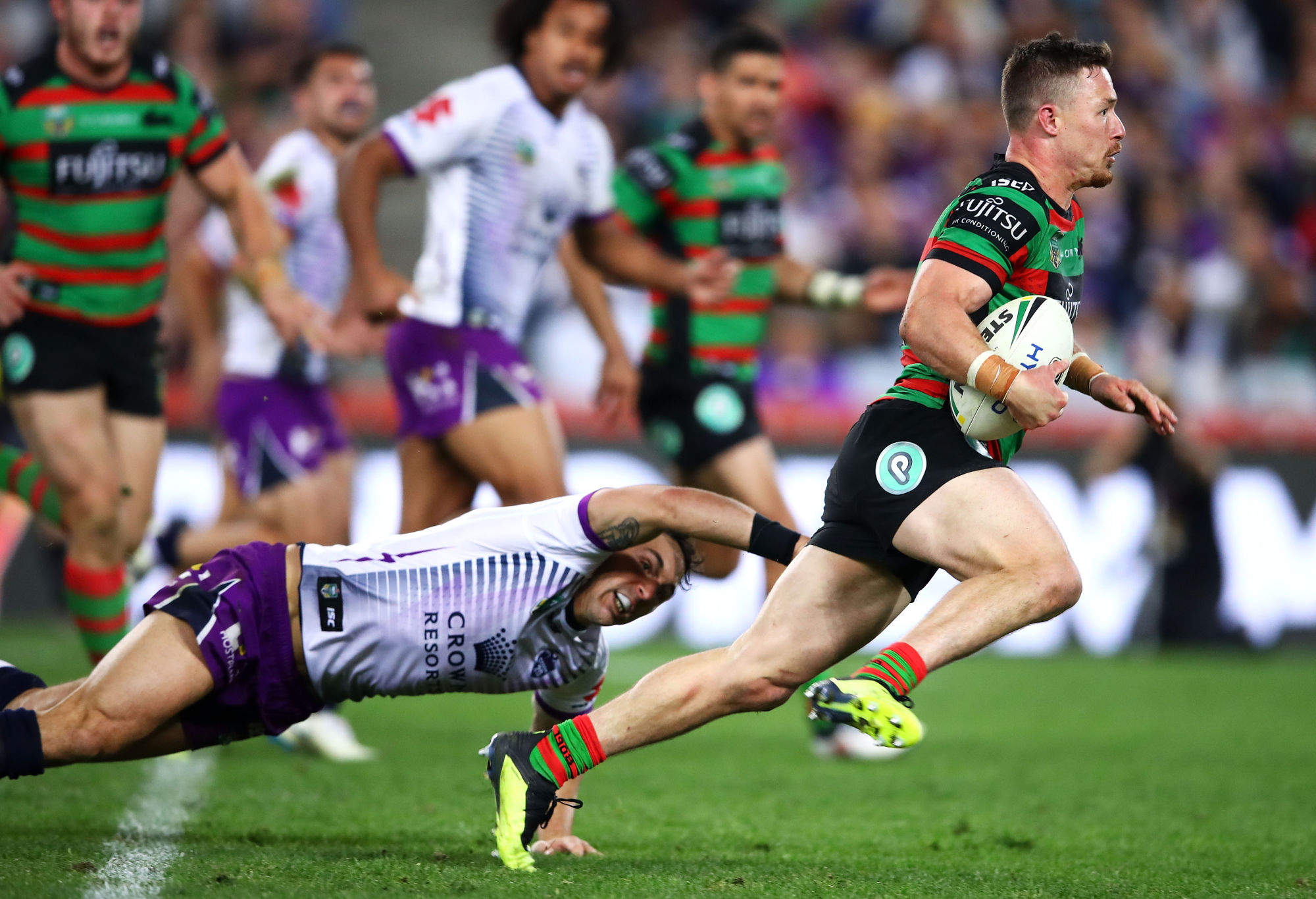 Finals
The Rabbitohs have played 85 finals matches in their history. Only ten of those have been in the NRL era. They’ve won five and lost five of those.

This is their first finals game since they were bundled out in the first week of the play offs in 2015 by the Sharks.

Overall
This will be just the 30th match between these sides and the Rabbits have only won five of them.

Want to hear a killer stat? The Rabbitohs have never beaten the Storm in Melbourne from 14 attempts.

The last ten
The Storm have won eight of the last ten games between the sides with an aggregate score of 233-126.

At this venue
As above, the Rabbitohs have played seven games at AAMI Park against the Storm and lost all of them.

Finals
These two sides have played one final at AAMI Park before. In 2012 the Storm beat the Bunnies 24-6 en route to the premiership. That is the only finals match that the Rabbitohs have ever played outside Sydney.

However, the next season the Rabbitohs got their revenge, beating the Storm 20-10 to eliminate the Purple Horde.

Those are the only two finals these two sides have ever played against each other.

Form
The Rabbitohs have won four of their last eight games, with only one of those wins being away from home.

The Rabbitohs have won five of their last eight, with two of those losses coming at home to other top eight sides (Sharks and Panthers).

Neither of these refs have ever done a finals game between these two sides.

In fact, Adam Gee has never officiated a game between the two sides.

Ashley Klein has done three home and away games between the two, with the Rabbitohs winning two of them, the most recent being the round 21 match this year.

The Storm have won one of the three games Ash Klein has officiated for them this year. The Rabbitohs have won three of their four games under Ash Klein this season.

Gee has run 11 Rabbitohs games and they have won six of them. The Storm have won 13 of the 17 of their games that Gee has controlled.

Who is going to win and why?

So why is it that I think the Cardinal and Myrtle are going to win this game? I think the Storm not having a settled halves combination – as the Rabbitohs do – will be debilitating.

Further, the Rabbitohs look better in attack across the field, with big rampaging forwards abounding.

Of course, Cam Smith could give another masterclass in game management and lead the Storm to effectively strangle the Rabbitohs attack. We’ve seen that magic weaved many times before.

But not this time.

I reckon the Bunnies will win.