The unofficial builder class is soon to be consigned to Overwatch’s history, with a rework to the lovable – but unviable – Swedish engineer Torbjörn currently being trialled in the game’s public test realm (PTR).

There’s no doubt the diminutive defense specialist needs some help; he was the only character from the entire roster of 28 not to get used at the Overwatch World Cup’s Group C event that I attended.

Will the current changes be enough to make him more viable on more maps? Are we headed for an unprecedented Torb-meta? I did some testing of my own on the PTR to get an idea.

I will stress, however, that these changes are only in effect on the experimental PTR servers. He may receive buffs, nerfs or other changes before he’s available on your everyday copy of the game, so it will be impossible to reach a definitive verdict until that happens.

What are the changes?

Firstly, let’s run through what changes Torbjörn is set to receive.

Given his playstyle revolves largely around his turret, its changes would have to be regarded as the most significant. While the turret itself still has HP and can be ‘healed’ by Torb hitting it with his hammer, there is no longer a level system.

The turret can be thrown a small distance by Torbjörn and, after a slightly longer casting time, will emerge in what was previously known as level 2. A new turret, however, cannot be place until the old one is destroyed (which can be done so immediately and remotely), and there is a moderate cooldown between the old one being destroyed and new the one being able to be built.

His previous ultimate ability has been reworked into a regular ability – it just now lasts only four seconds and only affects Torbjörn himself, not the turret.

His new ultimate allows him to cover an area in front of him with lava which, as you can imagine, inflicts pretty heavy damage on anyone who walks through it, while also dealing bonus damage to anyone with armour.

Surprisingly, however, his ability to hand out armour to teammates has been scrapped, as has the whole scrap-collection mechanic.

Given the game of Overwatch has become a lot quicker as the years have gone by – with teamfights, in particular, proving more mobile and dynamic – Torb’s instant levelling of his turret is a welcome change.

The sight of a dwarven mechanic hammering away at a measly excuse for a turret while the rest of your team was in a frenetic firefight was exasperating, so now he’ll be able to keep up with the faster pace of combat. His previous ultimate now serving as a secondary ability will help greatly in this regard too.

His new ultimate seems to do a fair amount of damage and, while it may come across as easily avoidable, his old ultimate was very easy to wait out too. This one has a far wider range of applications and has exceptional potential to turn the tide on Assault and Control maps – areas ole’ Torby used to never set foot.

The cooldown between turret builds is an interesting one. While it’s an obvious hindrance at the higher levels, it’s a pretty good balancing mechanism for lower levels of play – where the auto-aim of Torbjörn’s turrets makes him quite a strong character.

If he can’t keep building turrets when he wants, players now have a window to take him out of the frame. I’m just not so sure players at the level of being troubled by Torb will be able recognise or exploit this new weakness.

The main thing that’s blown me away so far, however, is the outrageous power of his plain old gun. Both the primary and secondary fire of his rivet gun, while still somewhat difficult to land, seem to do devastating amounts of damage on the practice range. 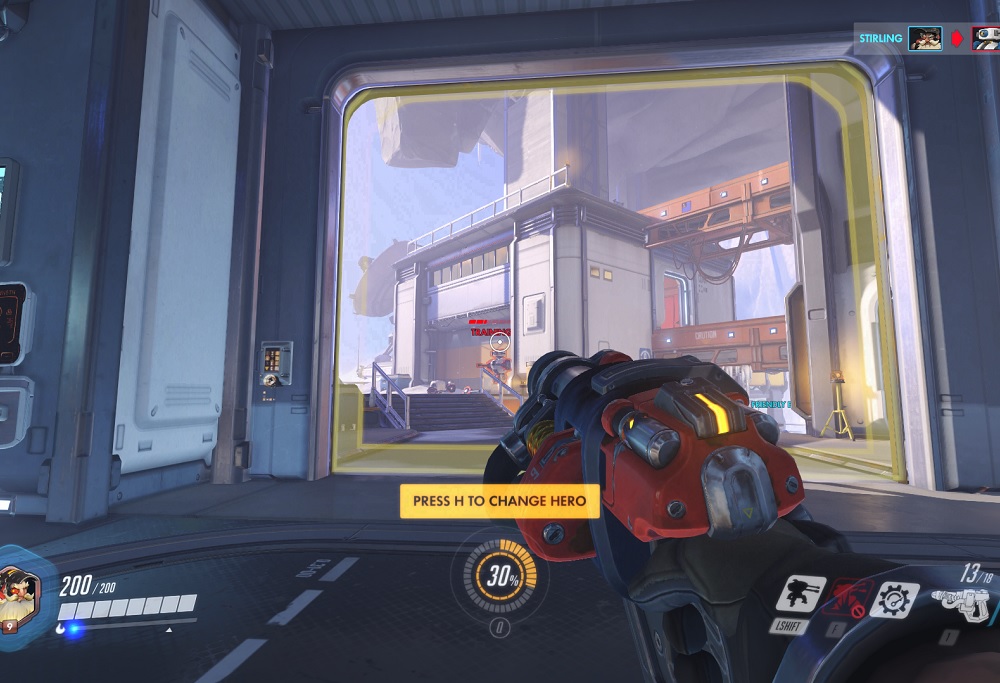 That is a loooot of damage for one headshot. (Screenshot)

It’s hardly a top-level case study, but I found both headshots and bodyshots with his primary fire were doing noticeably more damage than McCree’s pistol. His firing rate has always been deceptively quick and, combined with the reworked ultimate, could see him doing Storm Arrow 1.0-type damage if not monitored.

I’d be lying if I said I’d logged several hours with this character prior to the rework, but I definitely don’t remember his level of damage being this high.

Will this make him more viable?

This is hard to answer. When reworks like this get undertaken, it’s easy to fall into the trap of thinking that if the character in question isn’t appearing in top-level comps immediately afterward, the experiment has failed. That’s not at all the case.

Symmetra, the most recently reworked hero, was used sparingly in Group C, and was most commonly spotted during defensive setups, before being swapped out prior to the match starting.

That said, it is absolutely undeniable her versatility has increased greatly since her abilities were rearranged. While she’ll always be something of a fringe pick, there are no longer maps or situations where she was objectively useless.

Torbjörn will be able to theoretically contribute to a wider range of scenarios nowadays, but I’m not sure if the changes he’s received are dramatic enough (so far) for us to see him in Overwatch League colours next season.

The auto-levelling of the turret is offset by the lengthy cooldown, and the loss of armour donation is actually a pretty big loss if you ask me.

His damage is up but, while this might help in terms of viability, I can sense it becoming too un-fun to play against to be allowed to stand.

In any case, it is really encouraging to see original characters being given incredible amounts of attention as the metagame twists and turns.

Once they get Torbjörn fine-tuned, who do you want them to work on next?