Michael Cheika has kept his job as Wallabies head coach, but Rugby Australia have still made some changes to their high-performance structure, bringing in Scott Johnson as the new director of rugby and establishing a national selection panel.

There has been much conjecture around Michael Cheika’s position as Wallabies coach in recent months, following one of the worst seasons in the side’s history, but Rugby Australia have decided against replacing the controversial coach after a review last week.

Rugby AU opted instead to bring in Scotland’s director of rugby, Scott Johnson, in a similar role, paving the way for Cheika to stay in charge of the Wallabies until next year’s World Cup in Japan. Johnson will begin his new position in Australia in mid-March next year, allowing him to remain with Scotland for next year’s Six Nations.

Cheika, who will report to the new director of rugby, and Johnson will both sit on the three-person national selection panel, the third, independent, member of which is yet to be announced.

Rugby AU CEO Raelene Castle made the announcement at a press conference on Monday afternoon, but played a straight bat to questions about the future of Cheika’s Wallabies assistants, Nathan Grey and Stephen Larkham, only saying Cheika has “made some recommendations post his review and those recommendations will be discussed with Scott Johnson.”

Johnson, who was born in Sydney and spent his playing career in Australia, began coaching in 1999 at the club level with Penrith, later taking charge of Australia A and working as a Wallabies assistant coach under John Connolly before stints in Wales, the USA and Scotland. 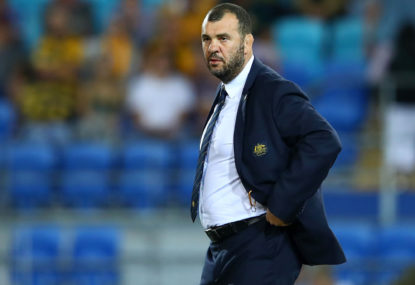 Rugby Australia re-arranges the deck chairs on the 'Titanic' Wallabies

After joining Scottish rugby as interim head coach in January 2013, Johnson was appointed director of rugby in May of that year, overseeing the side’s resurgence in international rugby circles. While a somewhat controversial figure in Scotland, Johnson’s tenure has proven fruitful, with Scotland now ranked seventh in the current world rugby rankings.

There were two other components to today’s announcement, with Australia’s Super Rugby clubs agreeing to an aligned national high performance model, and the establishment of a ‘fighting fund’ to keep young, talented players in Australian rugby.

“We have worked closely with the Super Rugby teams and I want to thank them for their support of a unified approach to ensuring we will have the right structure in place to achieve long-term success,” Castle said.

“We have assessed the high performance areas where we need improvement and measured ourselves against systems across our international competitors. Whilst we have incorporated some elements from other national systems, we have made sure that the framework for the national high performance plan is an Australian version that takes into account our differences and strengths.

“The national high performance plan will also be bolstered by the establishment of a fighting fund to support the recruitment and retention of identified youth talent. We want to find, develop and keep the best athletic talent in the land,” she said.

“It has been a tough year for all who love rugby, and this is an important step in building a strong, successful and sustainable future for Australian rugby and getting the Wallabies back to where they belong.”