Rape, assault and a sex tape: One of these things is not like the others

It’s been a big week of bans and fines. And, dare I say it, the NRL pretty well got it right.

Not the timing, mind you. That it took almost three months for head office to actually do something – anything – about the issues that have plagued the off-season show that the NRL is still plagued by the problem that saw David Gallop booted almost seven years ago.

The joint is way too reactive.

But plenty has already been written about the timing of these announcements, so instead, let’s focus on what they got right.

Scott Bolton
Such was the severity of the allegations levelled at other players over the off-season, a bloke who actually pled guilty to assaulting a woman was virtually forgotten.

So it was good to see Scott Bolton slapped with a ten-game ban, along with being fined five per cent of his salary – with half of both suspended provided he address the captains and senior players of each club during the Magic Round.

Because, at this stage, the North Queensland prop is the only current player who has had his day in court – and, again, he pleaded guilty to the charge of common assault.

Let’s be clear: it doesn’t matter that he ‘just’ touched a woman’s thigh. Common assault is still assault, and an NRL player pleading guilty to the charge does not deserve to have his case swept under the rug – which, until Friday, it appeared to have been.

Action against Bolton from head office was a necessity.

As for reports in the Courier Mail that North Queensland chair Laurence Lancini wasn’t happy with the ban? Wake up to yourself mate. You’ve got a bloke who pleaded guilty to a serious criminal charge on your books, yet he’ll be playing come Round 6.

It’s a far better situation than the Dragons and Sea Eagles are facing – with both clubs indefinitely losing the services of innocent men.

Jack de Belin and Dylan Walker
First off, something I want to clear up.

We keep hearing that standing a player down ‘does not make an assumption about their guilt or innocence’.

Yeah, you need to take ‘or innocence’ out of the equation. There is an existing assumption of innocence for anyone who has not been convicted of a crime. It’s the basis of our legal system – innocent until proven guilty.

People have had a hard time wrapping their heads around this – Peter Beattie had to correct himself on it a few times, and in announcing Jack de Belin’s standing down, Todd Greenberg said “we are making no judgement on his guilt or innocence”.

Let’s be crystal: the NRL standing Jack de Belin and Dylan Walker down makes no assumption of their guilt.

They are both, at this time, very much innocent.

Anyway, while I’m not entirely sure what it is about a crime carrying a potential 11-year sentence that makes it an automatic stand-down – what happens after ten years and 364 days? – the new edict has been a long time coming.

It was abundantly clear that neither of these men are in a position to play. Though they are innocent, their alleged crimes are too serious for us to pretend that everything is fine until they’ve had their day in court.

As for concerns about the murkiness of what happens if a crime isn’t worthy of 11 years’ time, Walker being stood down while Tautau Moga is apparently still right to play is illustrative. 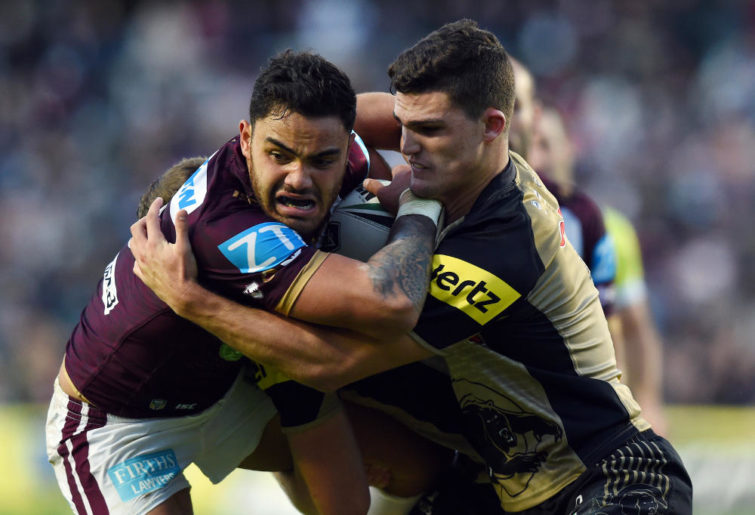 Specifically, it’s a case of perception is reality.

While Walker’s partner has retracted her statement, some pretty shocking details of his alleged offence have been made public.

By comparison, all we really know about Moga is that he is alleged to have slapped a cabby – no CCTV, no gory specifics, no worries.

I’m not sure I agree with it, but whether or not appalling or grubby details are made public appears to be the line in the sand.

Todd Greenberg was probably right when he said ‘Big Papi’ was guilty of “gross stupidity”, but I honestly cannot muster any outrage at this bloke.

I’ve seen the videos – we all have, right? – and they feature consenting adults doing some weird shit.

But then, in the words of Dave Chappelle, “Everybody f***s funny to somebody.”

It took them three bloody months to work out that alleged rapists and wife beaters probably shouldn’t be playing, but they were very quick to condemn someone who had sex tapes leaked against their wishes.

And, if you’ll allow me a brief tangent, what would they do if a player came forward and said: “I like to be filmed and for people to see it”?

Nothing illegal, they just prefer to get freaky in a way that’s not heaps common. Does that player get banned?

A chat for another day…

Ultimately, I guess we’re saying Napa was a goose and it’s going to cost him. I reckon ten per cent of his annual wage is a bit steep – particularly when it was announced on the same day that a bloke who admitted to common assault got five per cent, with half suspended.

But there was no way in hell he should have spent time on the sidelines just because he has created new search results when you google ‘NRL digital’.