The St George Illawarra Dragons have seemed on track for deep finals runs the last two years, but failed across the second half of the season. It’s a trend which will change in 2019.

The club has opened the season strongly in recent years, but seem to taper off around Origin time.

The fact the club are already supposedly talking with Paul McGregor about a contract extension seems absurd.

McGregor’s man management of a roster across a season has clearly been a poor point for the Dragons in the last few years, with the side looking tired during the second half of 2019.

The NRL season is a long beast, and you don’t want to come out firing. The Roosters in particular were an example of that last year, where they started slow, but put together a brilliant couple of months before the finals.

The Dragons need to be more like that, but also, McGregor needs to learn to trust the youth – the talented youth – at the club.

St George Illawarra did come away with a surprise finals win in Brisbane, before taking the Adam Reynolds-led South Sydney Rabbitohs all the way, but all in all, they came up short given the roster they had and the form they displayed early doors.

Of course, you can’t talk about the Dragons this pre-season without mentioning the elephant in the room – Jack de Belin.

New developments yesterday in Federal Court suggest he might be able to play, but it’s obviously an almighty distraction for the club either way.

For the purpose of this, let’s assume he is able to play, because, at the time of publishing, that’s exactly what it looks like he will be allowed to do.

The biggest problem heading into the new season is the amount of depth lost in the backline.

Whether it’s the retirement of club stalwart Jason Nightingale, or the loss of youngsters Reuben Garrick and Patrick Herbert, who were both on the fringe of first grade and could make debuts this year, it’s a concern.

The two bigger losses in the backline though are that of the utility Kurt Mann, who found a way to plug any hold needed to be plugged by the Dragons last season, and Nene Macdonald, who has fast become one of the game’s best wingers.

He is a great pick-up for the Cowboys, even if there were some consistency issues in the second half of 2018 – but then, every member of the Dragons faced those same problems.

The problem is, that for the talent they have lost in the three-quarter line, they haven’t replaced it. Lachlan Maranta, Jonus Pearson and the little-known Fijian, Mikaele Ravalawa join the club.

They have also lost Leeson Ah Mau, who might be their biggest loss in the front row. He’s had a great couple of years and really steadied the front row rotation for the club.

Talented youngster Hame Sele also leaves for the Panthers in the second row.

Corey Norman does join the club in what could either boost, or hinder, the spine, while Korbin Sims will join brother Tariq and get plenty of minutes.

Spine
This is going to be a changed spine thanks to the addition of Corey Norman at the club in 2019.

He will line up in the halves alongside Ben Hunt, which allows the Dragons to play their best four players in key positions.

I’m not 100 per cent sold on that being the best halves combination, but with Gareth Widdop excelling at the World Cup for England in 2017, there can be no questions that all three need to be in the side, and this is the only way to do it.

Cameron McInnes will again line-up at hooker, with the number nine looking to put in another big year which had him battling for the spot at hooker in the Origin set-up last year. 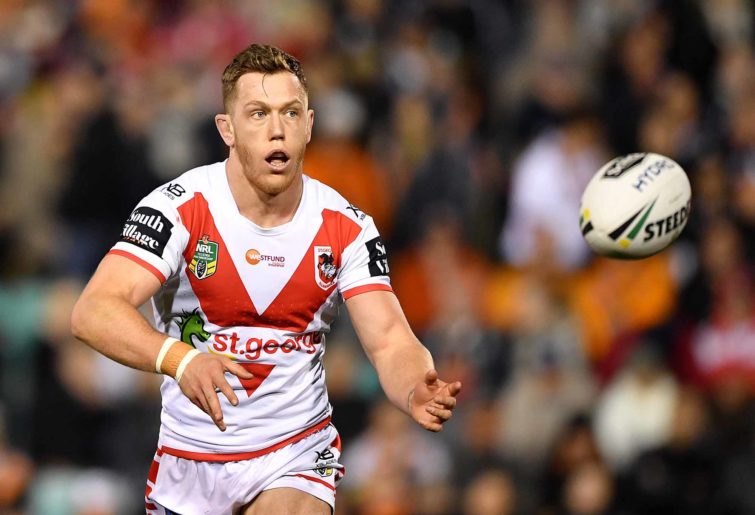 Who will take out the 2019 NRL premiership? (AAP Image/Joel Carrett)

Matt Dufty is the big name likely to miss out, although he might get a bench spot to play Kurt Mann’s role, while depth is provided by Jai Field and Reece Robson.

Backs
There are some changes in the backs this year, with Zac Lomax and Jordan Pereira likely to nail down the wing positions.

It’s a lack of depth with all the big name departures out wide. Mikaele Ravalawa, Lachaln Maranta and Tristan Sailor provide the coverage, but none of it looks all that strong.

Euan Aitken and Tim Lafai will again grab the centre spots, and they need to both have big years, particularly in defence, working with combinations which appear shaky.

Forwards
This has the potential to be a great forward pack, but let’s deal with the lock position first.

Jack de Belin is named in my 17 below, and at the moment, he has to be. Based on yesterday’s ruling, the rule is not yet a rule, so he is free to play at the moment.

Jacob Host, Luciano Leilua and Josh Kerr are all fighting for the remaining bench places, because the rest of the pack picks itself.

Paul Vaughan and James Graham formed a strong duo last year, and are going to start up front one way or another, while Tariq Sims and Tyson Frizell round out the pack.

It’s an all-representative starting unit, and one of the Dragons best assets when push comes to shove.

Origin impact
There are plenty of probables, and a couple of possibles for New South Wales Origin honours. 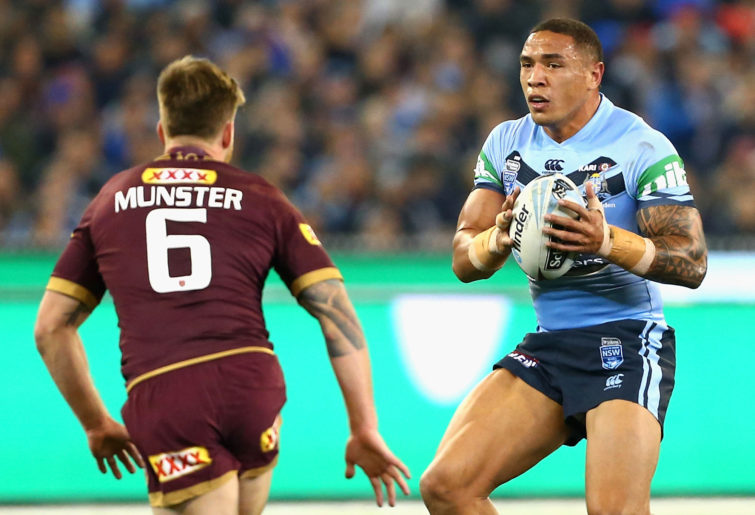 Tyson Frizell of the Blues (Photo by Robert Prezioso/Getty Images)

The first two will definitely be there again, while de Belin and Sims’ cases are up in the air for separate reasons.

An injury to Damien Cook would leave Cameron McInnes in line for the number nine jersey as well, while Euan Aitken could push his case with some strong early-season form.

Ben Hunt is another possibility for Queensland, but given his lack of performance in big games, it’d seem unlikely.

Will the new-look spine click?
Without a doubt, this is the biggest question facing the Dragons this year, and takes plenty to come to answer.

In short, it should. All four players in the key positions have immense talent, but it clicking is a different story.

Corey Norman was in poor form last year, there is no doubt about that, and he could destabilise the balance a little bit here. Still, playing alongside Hunt should allow him to run the ball, be creative and do what he did best when he rose up as one of the game’s best halves a few years ago.

They were both at the Broncos together about a decade ago, but have both come on in spades since then, and on paper at least, could work well together.

We know for a fact McInness will just keep doing his thing in the No.9, but in what looks like it’ll be his final season in the NRL, Gareth Widdop’s spot at the back is the most intriguing of the lot.

He played there for England in the Rugby League World Cup when it was best for team business and did a ripping job, while he was also good there for the Storm previously.

But this is a different beast. He isn’t playing behind Cameron Smith and Cooper Cronk. He isn’t taking on international teams at the end of a long season. 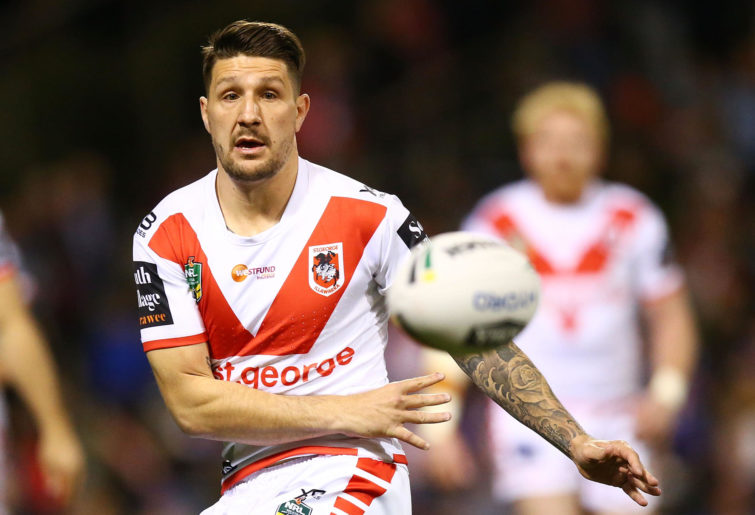 He is now a first-choice, NRL fullback, and whether he is up to it, only time will tell. It’ll add extra creativity, but on the evidence provided in trials, they are standing on each other’s toes at times, and defence is a worry.

There is also the question of what Dufty does.

There could be definitely some growing pains here, but the Dragons need it to work.

Will the forwards dominate again?
The biggest strength of the Dragons last year when they played good footy – and yes, there was a lot of distance between their best and worst – was that the forwards were simply on fire all the way round.

Up front, it was Paul Vaughan and James Graham. Tyson Frizell and Tariq Sims dominated the edges.

Essentially, their halves had time and space because of the work the forwards were doing, getting offloads, line breaks and quick play the balls.

Like the rest of the Dragons, that disappeared, but they need to get back to that style of playing direct, and not having any restraints on what can be done in the middle third, because it worked like a dream last year.

If this pack dominate again, then with the creativity possessed in the key positions, it’ll be another strong year.

The outside backs who left the club last year all had excellent defensive techniques and communication for the most part.

There were times it fell apart, but this is the NRL, and that’s going to happen in patches.

This year, a centre in Zac Lomax is going to be on one wing, a relatively inexperienced player in Pereira on the other, and the depth appears thin on the ground.

Defence wins premierships, and if teams are allowed to simply go to the edge and score points, there will be problems all over the shop for the Red V.

Fixture analysis
While no game in the NRL can ever be considered as an easy one, we are going to get a real opportunity to find out exactly where the Dragons are at between Round 7 and 14.

It’ll feel like a never-ending road trip for the club, and while some of those games are in Sydney, they play just two at their home venues in seven weeks, with one of those in Mudgee.

They do have an away game in Magic Round though, so that helps, and it will be followed up by three straight home games, with six of their next nine in total to be played between Wollongong and Kogarah.

Still, the Dragons are going to be put right up against it early doors. They start the season in humid Townsville, then play title contenders the Rabbitohs and Broncos, before a trip to the Hunter will provide another sturdy test.

Their double-up list on the surface looks pretty good though, as does a finish to the season which features the Sharks, Titans, Roosters, Tigers and Titans again in the final five weeks.

Simply put, the Dragons can’t blame a rough schedule for not making a real fist of 2019.

While the Dragons can’t blame the fixtures, they have plenty of other excuses to turn to, and need to avoid doing that.

What the impact off the field is may really be the telling point of the Dragons season, and that being said, there is a disclaimer here – I’ve got them up the pointy end based on talent and talent alone, but that could quite literally be anywhere on the table if things spiral out of control and the media gets a hold of the club throughout.

They have talent wall-to-wall, and a spine which is strong. If, and of course it’s a big if, but if everything clicks, this could be a premiership-winning side.

We will be back from Monday to count down the final three teams, then the first week of expert tipping will go up on Thursday ahead of the season kicking off between the Storm and Broncos that evening.