Yesterday we asked you to help us predict the 2019 AFL ladder. Today, with just one night left until the new season, here are the results – who The Crowd tipped to finish where, and my own personal tips as well.

Most are of the view that Adelaide will move back up the ladder this year. The Crowd has them going to the middle of the finals pack, they’re my premiership tip.

Although the Lions are an exciting young side, The Crowd doesn’t have them moving too quickly up the ladder. Personally, I’m tipping they sneak into finals. Stranger things have happened.

Carlton should be better in 2019 than they were last year, but perhaps only because it would be nearly impossible to do otherwise. Starting to get an impressive stockpile of talent. 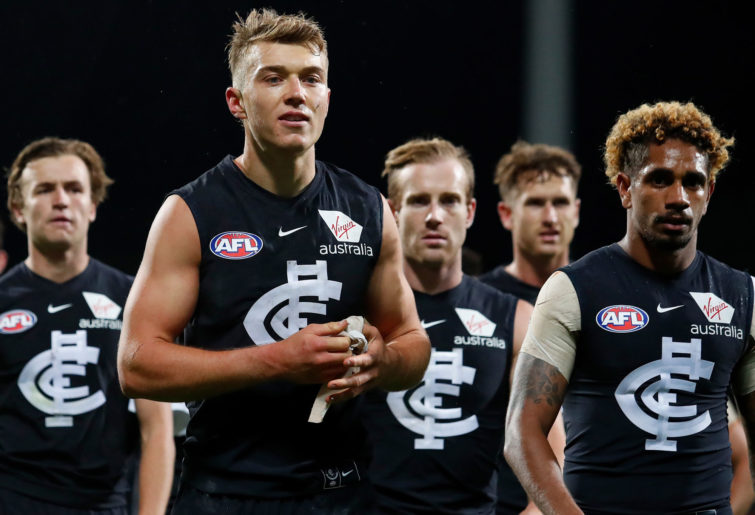 The return of Dayne Beams and some good luck on the injury front could help Collingwood improve again in 2019. But a lot of things lined up for them last year and I’d say a tougher 2019 draw will see them take a step back.

After bringing the hype hard earlier in the year, poor preseason performances combined with injuries to Joe Daniher and Cale Hooker have dulled the expectation on Essendon. I’ll admit I was tempted to leave them out of the eight.

Although Freo landed some good talent over the offseason, there’s evidently still some work to be done putting the pieces together. Seem unlikely to make a radical leap forward.

The Cats were a middling side in 2018 and didn’t really fire a shot in finals. I’m tipping they won’t get the chance to this time, though The Crowd thinks they’ll sneak in.

In any given week, the Suns will be fielding somewhere between three to six blokes they picked up from the bus station on the way to the game. A few plucky wins will come but it’s hard not to see them copping the spoon.

Don’t let the fact they lost some players last year fool you – the Giants are still the most talented list in the competition. I’m tipping their first grand final appearance, The Crowd has them a little lower.

The Hawks looked a class below in finals last year, which would suggest the needle is pointing down. A broken leg for Tom Mitchell, likely to cost him all or most of the season, makes that more likely.

The Dees made enormous progress last year and I wouldn’t be surprised if they need a season to catch up with themselves in 2019. That said, they have more muscle than any other side in the comp.

Tempted to sneak North into my top eight somewhere, but it’s a tight one this in 2019. They’ve got abundant midfield depth, can it all work in concert?

Port missed finals last year and then traded out two key players, which would suggest a backwards step in 2019. Still, I wouldn’t rule them out as a surprise packet.

The crowd’s tipping Richmond for the Meatloaf flag (two out of three ain’t bad), and the addition of Tom Lynch makes a pretty compelling case. I reckon they may have been tactically found a little, and the new rules won’t help.

The Saints were a solid side for a few years – what’s a better indication, that, or 2018? Hard to say, but I’m being optimistic. That said, some of the injury news in the preseason has them feeling a little wobbly and they’ll be in the mix for the spoon if the wheels fall off.

Tipping Sydney to miss finals is a mistake made on a regular basis, and both myself and The Crowd are set up to get bowled over this year. Your move, Swans.

With some quality players to add to a side that won the premiership last year – and the looming threat of a Dom Sheed breakout – the Eagles should be thereabouts again.

The Dogs have plenty of raw potential, but this doesn’t seem likely to be the year we see it unlocked.