The ethnic diversity of the All Blacks

The sport of rugby has often been credited with helping integrate the New Zealand Maori and Pakeha (white) communities.

Whatever the situation may have been in general society, there was never any distinction within the national game. From the day Charles Munro returned from his studies in Britain and introduced the sport to Kiwis in 1870, Maori and Pakeha have played side by side.

Whereas rugby union may have been the sport of “gentlemen” elsewhere, denoting the privileged classes, in New Zealand it was the sport of all from the outset, and undoubtedly this has been the key to the nation’s unrivalled success in the code.

The first major touring team to leave New Zealand’s shores was, in fact, the ‘Native’ team of 1888, which comprised mostly of Maori players, but also a handful of New Zealand-born Pakeha.

The squad of 26 played no fewer than 107 games in Australasia and Britain, winning the majority of them – plus 11 Australian rules fixtures!

Among the players was the legendary Thomas Rangiwahia Ellison, who became the first captain of the New Zealand national rugby team when it toured Australia five years later. Ellison even designed the team’s uniform, which led to the now famous nickname of the “All Blacks.”

Also credited with pioneering the now defunct wing-forward position, Ellison was inducted into World Rugby’s Hall of Fame in 2008.

He was New Zealand’s first Maori lawyer, as well as an author, a rugby administrator and a politician. The Ellison family have since produced a plethora of Kiwi sports stars, including three-time Super Bowl winner Riki and former All Blacks utility back Tamati – a direct descendant of Thomas.

While New Zealand society itself was not particularly diverse a century ago, it did manage to produce an All Blacks star of Afro-Caribbean ancestry.

Nathaniel Arthur Wilson, dubbed ‘Ranji’ after a famous Indian cricketer of the day, made his international debut against the touring Anglo-Welsh side of 1908 and played 10 tests in total.

Rated the best loose-forward of his era, he would surely have played in more Tests had war not broken out on the other side of the world.

Wilson became a sergeant in the New Zealand forces and was one of the stars of the ‘Trench Blacks’ army team which played a series of fixtures in Europe. This culminated in the Kings Cup tournament in 1919, involving national teams from within the British Empire, and was duly won by the Kiwis.

Although he had played against South Africa in that tournament, Wilson was omitted from the New Zealand army team which toured South Africa directly after the war. He was prevented from playing in the US on racial grounds as well.

Thus he hung up his boots, but remained involved with the game as a coach and administrator, and served on the All Blacks selection panel.

Maori players were also left out of tours to South Africa prior to the 1970s, among them immortal fullback Georgia Nepia, widely regarded as one of New Zealand’s finest players ever.

While still a teenager, Nepia had played in all 32 matches on the “Invincible” All Blacks’ unbeaten tour of Europe and North America in the mid-twenties.

But he was not eligible for New Zealand’s first tour of South Africa in 1928, and in fact only appeared in five more Test matches, playing his last at 25. He later pursued a rugby league career in Britain and helped the Kiwis defeat Australia in that code in 1937! 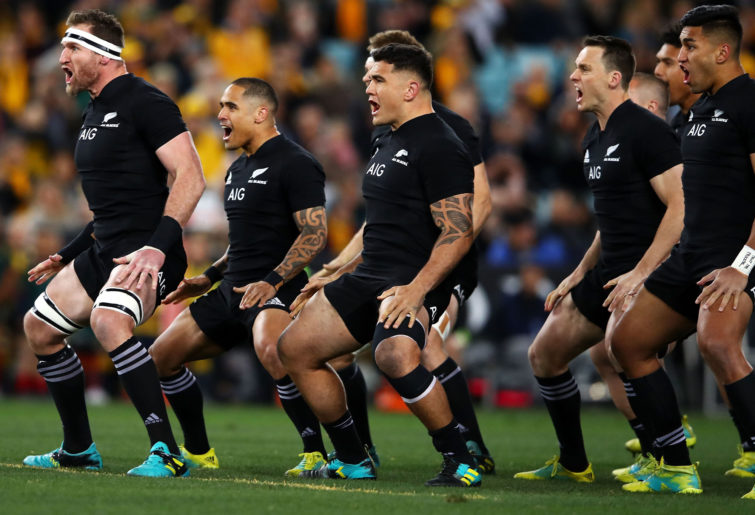 The All Blacks are the defending World Cup champions. (Photo by Mark Kolbe/Getty Images)

Indeed, while rugby certainly helped bring Maori and Pakeha together, its ongoing ties with Apartheid South Africa would eventually drive in a wedge, culminating in the huge demonstrations of 1981, when the Springboks embarked on their infamous ‘Barbed Wire’ tour of New Zealand.

Polynesian players were increasingly turning to rugby league as an alternative, notably in the major centres of Auckland and Wellington, so that the 13-man code even began to rival union’s popularity in the land of the mighty All Blacks, and may have precipitated its transition to professionalism.

A major turning point came with the inaugural Rugby World Cup in 1987, staged in New Zealand and Australia. This proved tremendously popular and thus negated the status of All Blacks versus Springboks clashes as the de facto ‘World Championship’. Indeed, there were no further contacts between the two teams during the Apartheid era.

Meanwhile, although Bryan Williams and Bernie Fraser had starred for the All Blacks in the seventies and early eighties, players of Pacific Island heritage only began to break into the All Blacks in numbers around the time of the first World Cup; back row sensation Michael Jones to the fore.

Inevitably this brought accusations of “poaching” from rival nations, and even some New Zealanders questioned their inclusion, but most of these players were actually New Zealand-born – and therefore as “Kiwi” as their team-mates.

Immigration rules had been relaxed in the late 1950s and happily for rugby in the nation this all came to fruition in the late 1980s.