AFL team of the week: Round 3

Round 3 of the 2019 AFL season delivered some truly breathtaking performances from some of the stars of our game, and they feature in this week’s edition of team of the week.

Back pocket – Tom Stewart (Geelong)
Another week, another selection in the team of the week for Stewart, who put in a brilliant defensive performance against the Crows on Thursday night. Hauled in eight grabs, laid three tackles and operated at 78 per cent efficiency from his 23 disposals.

Full back – Liam Jones (Carlton)
Had the mammoth tasking of manning champion goal-kicker Lance Franklin and did a sterling job. With the Blues conceding 54 inside-50s to the Swans, Franklin was restricted to just two majors, with Jones fighting and scrapping with him all day long.

Back pocket – Luke Ryan (Fremantle)
His new hairdo got plenty of coverage on the weekend given he had the ball an equal game-high 32 times, using it an impressive 90 per cent efficiency, while he took 13 grabs in the Dockers’ back line.

Half back – Ricky Henderson (Hawthorn)
The underrated Hawk is having a very good season and that continued on Sunday against North Melbourne. The hard-running veteran collected 29 possessions, using it at 82 per cent, while he took seven grabs, laid three tackles and kicked a nice goal on the run in the third quarter.

Centre half back – Sam Collins (Gold Coast)
Fresh from taking a match-saving mark last weekend against Fremantle, Collins backed it up with a superb stopping performance down back for the Suns against the Western Bulldogs on Sunday. Kept the improving Josh Schache to a handful of touches and no score while taking six grabs and collecting 11 touches.

Half back – Brad Sheppard (West Coast)
A lot of praise gets heaped on Jeremy McGovern, and deservedly so, but this guy isn’t far behind him when it comes to discussing West Coast’s best defenders. Went to Jordan De Goey after his hot start to the match, quietening him while finishing with 18 touches at 83 per cent efficiency and 13 marks. Turns most of the 50-50 contests he’s involved in into wins for his team.

Wing – Travis Boak (Port Adelaide)
Continued to turn back the clock with a superb game on Saturday against the Lions up at the Gabba. Accumulated 35 disposals – 15 of them contested – and also won seven clearances, took five marks, laid four tackles and booted two goals.

Centre – Patrick Dangerfield (Geelong)
Was arguably best on ground in Geelong’s win over the Crows on Thursday night. Against his former side, Dangerfield helped himself to 32 touches – 16 of them contested – plus won ten clearances, took seven marks, laid seven tackles and kicked a sensational goal bursting from a centre stoppage. 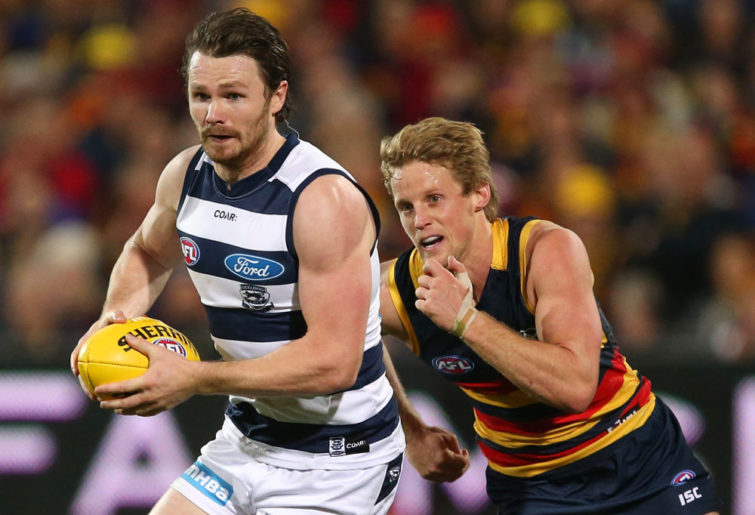 Wing – Lachie Whitfield (Greater Western Sydney)
Had the ball on a string against a depleted Richmond outfit on Saturday at Giants Stadium, winning 42 touches at 76 per cent, hauling in 12 grabs around the ground while laying four tackles.

Half forward – Luke Breust (Hawthorn)
Hasn’t troubled the scoresheet too much so far in 2019, but that changed on Sunday against North Melbourne. Was arguably the match-winner for the Hawks, taking five marks, laying three tackles and booting five majors.

Centre half forward – Jeremy Cameron (Greater Western Sydney)
Did what no player has done since Steve Johnson in 2011 by racking up over 30 possessions and kicking a haul of seven goals. Not only did he kick a huge bag, he also slotted five behinds and had another shot that didn’t register a score. Not only was it far and away the best performance of the round, it was one of the best individual games seen by a forward in recent memory.

Half forward – Isaac Heeney (Sydney)
Put a slow start to the season behind him on Saturday with a superb match against Carlton at Marvel Stadium. Won 26 disposals, took eight grabs and had a big impact up forward, kicking four goals.

Forward pocket – Jeremy Finlayson (Greater Western Sydney)
Cameron wasn’t the only Jeremy the Tigers had to contend with on Saturday, with Finlayson more than doubling his career goals tally with a bag of five majors. Also took five marks and had 15 touches in an ominous warning to opposition sides.

Full forward – Eric Hipwood (Brisbane)
While his side had enjoyed a faultless opening fortnight to the season, Hipwood went mostly unsighted as the Lions’ leading man in attack. His fortunes changed on Saturday night at the Gabba, blitzing the Power with five first-half goals. Finished with six majors – an equal career-high – plus 14 possessions and ten marks.

Forward pocket – Connor Rozee (Port Adelaide)
While it was the 203-centimetre giant doing damage on the scoreboard at the Gabba on Saturday night, up the other end a pint-sized youngster was also making a name for himself as a future star of the game. With 21 disposals, seven marks and five goals, Rozee guaranteed a Rising Star nomination for the round. This kid is going to be scary good.

Ruckman – Brodie Grundy (Collingwood)
Tough choice for the lead ruck role this week, but have to go with Grundy, who took on West Coast’s tag-team of Nathan Vardy and Tom Hickey and won convincingly. Helped himself to 22 touches, 13 contested, won 11 clearances, took four marks, laid five tackles and won 40 hit-outs in a supreme performance.

Ruck rover – Tom Liberatore (Western Bulldogs)
Fought hard for the Dogs on a dirty day. Amassed 30 possessions – a massive 22 of them contested – and also won 12 clearances, used the ball at 80 per cent efficiency and laid nine tackles. Back to his best.

Rover – Lachie Neale (Brisbane)
Another outstanding performance from Brisbane’s star recruit has him up there for Brownlow Medal favouritism, an award he should be leading after Round 3. Had a lazy 43 disposals on Saturday night against the Power (25 of them contested), won a monster 16 clearances, laid three tackles and kicked an important final quarter goal.

Interchange – Darcy Parish (Essendon)
Highlighted his importance to the Essendon line-up on Friday night against Melbourne, performing well both on the inside and outside. Had 24 touches including 14 contested, won seven clearances, took four marks and kicked 1.3 while having plenty of other score involvements.

Interchange – Jamie Cripps (West Coast)
In his first game back from injury, the premiership forward was incredibly damaging for the Eagles, booting four goals from 18 disposals and three marks.

Interchange – Mitch Robinson (Brisbane)
Gives the Lions a harder edge in the midfield, and he played a valuable role on Saturday against Port Adelaide. Had 29 touches at 82 per cent efficiency, took six marks and laid six tackles.

Emergency – Ben McEvoy (Hawthorn)
A very good game from McEvoy, who went toe-to-toe with Todd Goldstein. While he didn’t have as many ruck victories, he still gave his midfield a decisive edge with 22 hit-outs. Had a huge impact around the ground with 16 possessions, nine marks, five tackles and two goals.

Emergency – Jasper Pittard (North Melbourne)
Stood tall under a wave of pressure in the last line of defence for North Melbourne. Tried his best to generate some run, finishing with 25 disposals at 88 per cent efficiency, while he hauled in eight grabs and laid four tackles.

Emergency – Anthony McDonald-Tipungwuti (Essendon)
Was the livewire the Bombers needed on Friday night against the Demons, slotting four majors from 14 touches, while he took four grabs and laid three tackles. Would’ve made the final 22 if not for the some strong performances from other forwards.