Moise Kean is the new face of Italian football

Will Moise Kean save Italian football?

Kean can finish the work started by Mario Balotelli a decade ago and learn from his predecessor’s experience in a moment when Italy desperately needs a new hero.

Bearing the tag of saviour of Italian football is the burden falling upon the young shoulders of Kean.

Kean carries the heavy load of a nation rebuilding its international reputation after the humiliation of failing to qualify for the 2018 World Cup.

But the burden of erasing racist slurs and ugly chants from Italian football is also falling on the shoulders of the young talent.

The Juventus forward is just 19 years old but already holds some remarkable records, including becoming the second youngest man to score for Italy and the youngest in more than 100 years.

Moise Kean is enjoying a fantastic European spring, with two goals in the first two games of Euro qualification for Italy as well as deciding scores against Cagliari and Milan in the last two league games.

Kean is helping Juve to their 35th title, and eighth in a row. He has announced himself as the future face of Italian football.

Kean is not only an incredibly talented player but also the image of Italy’s modern multicultural society. 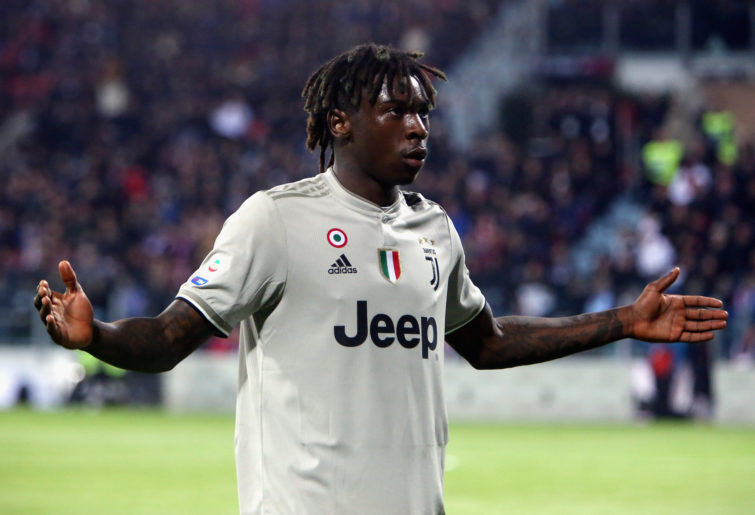 Juventus’ Moise Kean celebrates his goal in front of the Cagliari fans who were racially abusing him. (Photo by Enrico Locci/Getty Images)

Kean was born to Ivorian immigrants in Vercelli, a town midway between the two largest industrial cities of northern Italy, Turin and Milan.

He grew up in the small town of Asti and football – the omnipresent pastime of Italian youth – was his way into the sometime narrow-minded mentality of small-town Italy.

Football is now making the 19-year-old a household name in Italy.

Playing for the most successful team in the country and for the national team means Kean has become a constant presence in Italy’s newspapers and on TV screens.

Kean is often associated with Mario Balotelli, the first black player to appear for Italy in a major tournament.

Balotelli had a rough ride with Italian fans, and has sometimes been judged negatively by the public for his outspoken persona, for being at the centre of Milan’s rivalry between AC and Inter, and for his firm stance against racism.

The suspicion that the colour of his skin played a role in the mixed reaction of Italians has always been there.

Recent events in Cagliari, where Kean was racially abused after his goal, show how an ugly and vocal racist minority still exists among Italian football fans.

As the burden on Kean’s shoulders were not heavy enough, he must build on Balotelli’s volatile relationship with the media and public to fight against racism.

His success on the field and a carefully managed image can be an example to help erase any prejudice from Italian football.

But the journey is perilous and can crush the young spirit of the player.