Is Stoinis still in Australia’s best one day XI?

Just two months ago, Marcus Stoinis left the Allan Border Medal as Australia’s best one day player of the past year.

A deserved winner, the all-rounder shone in a side that won just two games in 12 months. Along with perhaps one or two others, his name was seemingly rubber stamped on the ODI team sheet.

But lacklustre recent form has shone a light on issues that can’t be ignored before a World Cup. Struggles with turning over the strike in the middle overs and a decreasing bowling workload leave it increasingly difficult to see how the all-rounder justifies a position in Australia’s now ultra-competitive XI.

Naturally, eight wins in a row have created a squeeze for spots, compounded by the return of Australia’s two best batsmen. And while he will almost certainly be in the 15-man squad released between now and April 23, his place at number six for Australia at the World Cup is, unlike a few months ago, far from assured.

Stoinis shot to fame with a blistering 146 off 117 against New Zealand in 2017, in just his second ODI. Naturally, interest soared in this new broad-shouldered all-rounder – a prototype physique in the Pat Howard handbook of cricket domination. But this innings skewed perception.

Sure, Stoinis can (to use Howard’s preferred vernacular) ‘hit a long ball’, but only in conducive conditions. That innings created a sense that, in Stoinis, Australia has a like-for-like option alongside Glenn Maxwell in the latter stages of an ODI innings.

But this is not the case, as has been made abundantly clear in recent months.

Now that a bigger sample size has emerged of his batting skill, we naturally see a more accurate picture. After 31 ODI innings, Stoinis strikes at a relatively healthy 93.5 per 100 balls, still well below Maxwell at 122, and even Peter Handscomb at 98.6.

But more worryingly, in his last 13 innings (since the start of the Australian summer) he has struck at just 81.3 for Australia. These are numbers dwarfed by middle-order colleagues in Eoin Morgan, Hardik Pandya, David Miller and Ben Stokes, to name a few.

And you don’t need mere stats to tell the tale. Stoinis is easily cramped at the crease by spinners, and struggles to turn over the strike early in his innings – something noted by several pundits in recent times, and a source of frustration for several readers on this site.

Unlike the aforementioned Maxwell and Handscomb whose fast hands and wrist-oriented approach allows them to manipulate the ball through gaps with (apparent) ease, Stoinis embodies a more heavy-handed approach. He will soak up many dot balls early on, in the hope that he rewards his team later. 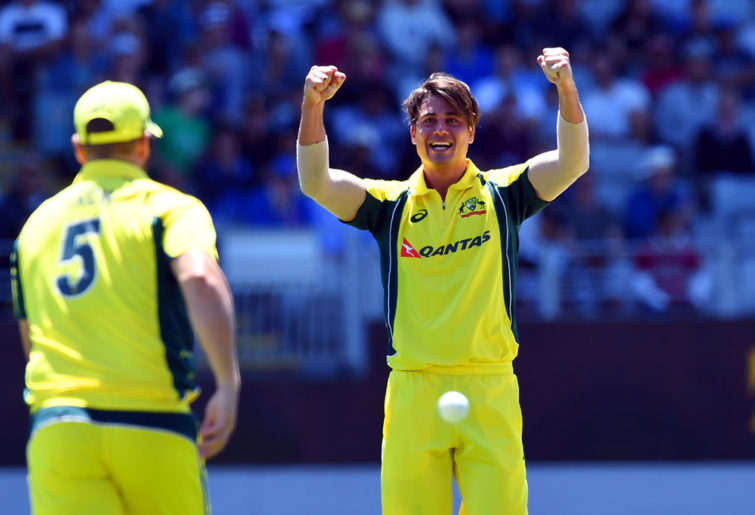 But that approach is fraught with danger should he fail to go on with things. Opposition captains now know Stoinis’ skillset, and squeeze him early. At the World Cup, Virat Kohli and Morgan can bank on miserly early overs with Stoinis at the crease, especially with the likes of Adil Rashid, Kuldeep Yadav and Yuzvendra Chahal at their disposal.

It is for this reason that respected cricket voice Kerry O’Keefe has now left Stoinis out of his best XI. “If you come in the middle order in those middle overs 11-40 against the good spinners, he has the hitting game late but does he have the rhythm and the rotation to work his way into a hitting situation against the better bowlers?” O’Keefe asked. “Ashton Turner to me is a real finisher, who has got the rhythm.”

Turner may provide a stronger option for Australia at six, his ability to move the innings forward from ball one a real asset. Further, his strength between the wickets turns many singles into twos, and he combines this with a similarly destructive ability as what Stoinis offers.

Stoinis’ bowling will be the thing that keeps him in the side, should selectors opt to do so. Without him, skipper Aaron Finch will likely rely on the remaining ten overs (after four frontline bowlers bowl out) from Glenn Maxwell, or a combination between himself and his Victorian teammate.

But Stoinis’ bowling workload has significantly decreased of late. In the recent India and Pakistan series, he bowled on average just 4.1 overs per innings. This contrasts with an average of 6.3 overs per innings throughout the rest of his career.

Finch and Justin Langer appear to have cooled on the idea of Stoinis as a finisher at the death, too, something that was floated during the Australian summer.

Sure, it would be a risk for Maxwell to assume so many overs with the ball should selectors leave Stoinis out of their preferred World Cup XI. But as Australia (despite recent form) still make up the chasing pack this World Cup, risks need to be taken.