It is Easter but I am not a fan of chocolate – yes, there are people who do not like chocolate– so I’m waiting for Saturday, 27 April, for a belated Easter present: the start of the Super Netball season.

The season starts with a bang with a Victorian vs Queensland double-header at Melbourne Arena: Melbourne Vixens vs Queensland Firebirds followed by Collingwood Magpies vs Sunshine Coast Lightning.

For a ‘non-contact’ sport there is plenty of contact and contests for the ball. The speed at which the players and the ball move is astronomical and their athleticism is a sight to behold. Each week you can watch two matches live on Channel Nine and another two matches live on Telstra TV, or you can watch all games live on the Netball Live app, which eligible Telstra customers can access for free for live games and replays.

So you can catch the action on either Nine, Telstra TV or the app, but to truly appreciate the speed and athleticism displayed I recommend you attend a game.

Here are my thoughts on the teams, their key players and key acquisitions and departures. 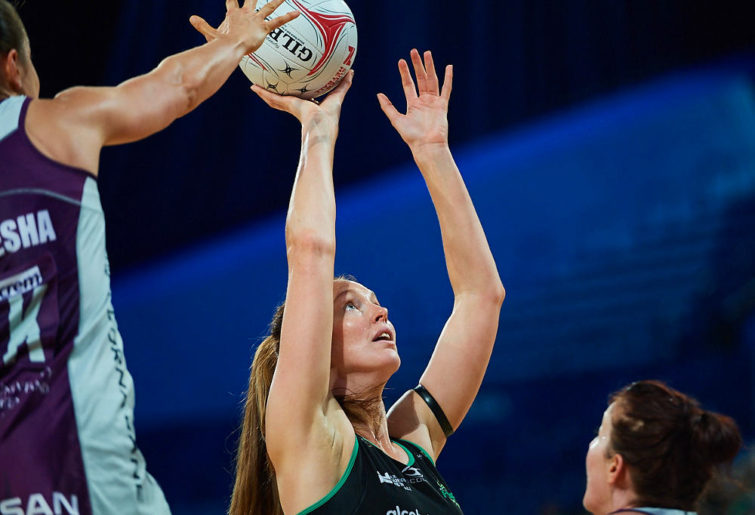 I am looking forward to seeing the exploits of Ugandan goalshooter Peace Proscovia, who the Sunshine Coast have recruited from Loughborough Lightning in England. Loughborough scouted Proscovia at the 2014 World Cup qualifiers in Botswana. I also have high anticipation of the all South African defensive circle combination of Pretorius and Phumza Maweni.

West Coast Fever
The West Coast Fever made the grand final in 2018 but unfortunately could not hold out the all-conquering Sunshine Coast Lightning. The biggest change in the Fever’s squad was the decision not to re-sign star goal attack Nat Medhurst, much to the chagrin of a large number of West Coast fans. As the cards fell, the Fever effectively traded Medhurst to the Magpies for Alice Teague-Neeld. Teague-Neeld is still looking to fully establish herself in professional netball after stints with the Vixens and Magpies.

Kaylia Stanton is the other option at goal attack but at 189 centimetres tall would not be your traditional goal attack. Jhaniele Fowler, with her height and athleticism, caused chaos for her opposition in 2018. The Jamaican Sunshine Girls shooter scored the most goals in the competition with 783 and was awarded the Suncorp Super Netball player of the year.

Other than goal attack, there is plenty of stability and consistency across the rest of the court. Courtney Bruce and Stacey Francis have formed a wonderful combination in the defensive circle. Diamond Bruce has the second most defensive rebounds, second most deflections and second most intercepts in the first two years of Super Netball. The former English Rose Francis is also agile and dynamic and won the 2011 and 2013 player of the year in the UK Superleague. The Fever’s midcourt of Verity Charles, Ingrid Colyer and Jess Anstiss have developed a very good combination which provides consistent and reliable output. Anstiss won the Super Netball young star award in 2018. 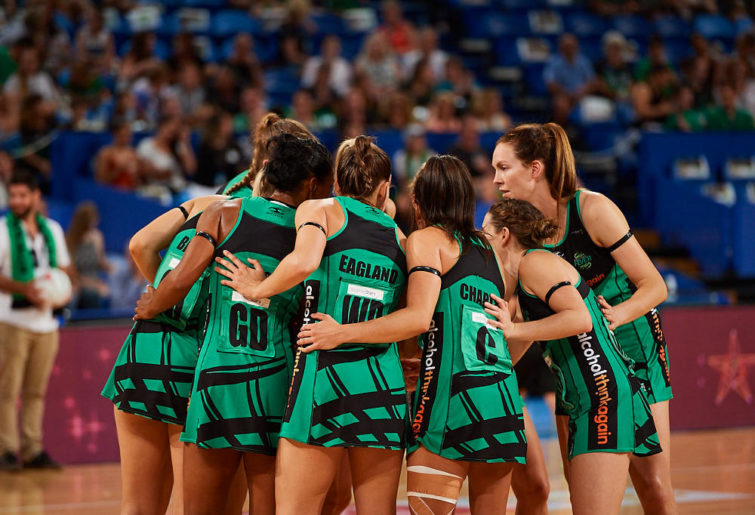 Giants Netball
Last season Giants Netball finished on top of the ladder but lost two finals to the West Coast Fever and Sunshine Coast Lightning. The Giants have some big holes to fill from last season’s team, with star midcourter Serena Guthrie returning to the UK to re-join Team Bath, Susan Pettitt and Rebecca Bulley have retiring and Kristina Brice moving to the Northern Mystics.

The big recruiting coup by the Giants this season is the recruitment of Australian Diamonds captain Caitlin Bassett. The other three gaps in the squad will be filled by Matilda McDonnell, Teigan O’Shannassy and Amy Parmenter, who have been elevated from the Canberra Giants Australian Netball League team.

A shooting circle of Bassett and England superstar Jo Harten will be difficult to stop. Their centre court will be led by skipper Kim Green and Australian Diamond young gun Jamie-Lee Price. Sam Poolman and Kristiana Manu’a will be the major planks for the Giants’ defensive end. One of the keys for the Giants in 2019 will be how their young guns step up.

Queensland Firebirds
The Queensland Firebirds made the finals last season and lost a thrilling semi-final by one goal to the Lightning. Like the Fever, the Firebirds have a stable squad, with the one change being the retirement of Australian netball legend Laura Geitz.

In the shooting circle the Firebirds use Jamaican Romelda Aiken’s size to their advantage at goal shooter, with a lot of lob passes used to position Aiken under the post. Even if Aiken misses, she is more than likely to get the rebound – she has taken 137 offensive rebounds in two seasons, which is incredibly 79 offensive rebounds ahead of the second player.

Her partner in crime is the athletic Gretel Tippett. Tippett has used her previous Basketball background to introduce changes to the way goal attack is played, one of which is scoring via a layup, which netball traditionalists may not be happy about but which certainly brings a new dynamic to the game.

The midcourt is led by the experience of their fiercely competitive captain Gabi Simpson from wing defence, Caitlyn Nevins displays speed and creativity at wing attack and the aggressive Mahalia Cassidy should continue to improve at centre.

Despite the retirement of Laura Geitz, the Firebirds have three good options in the defensive circle with young guns Kim Jenner and Tara Hinchcliffe as well as the more experienced Laura Clemesha. 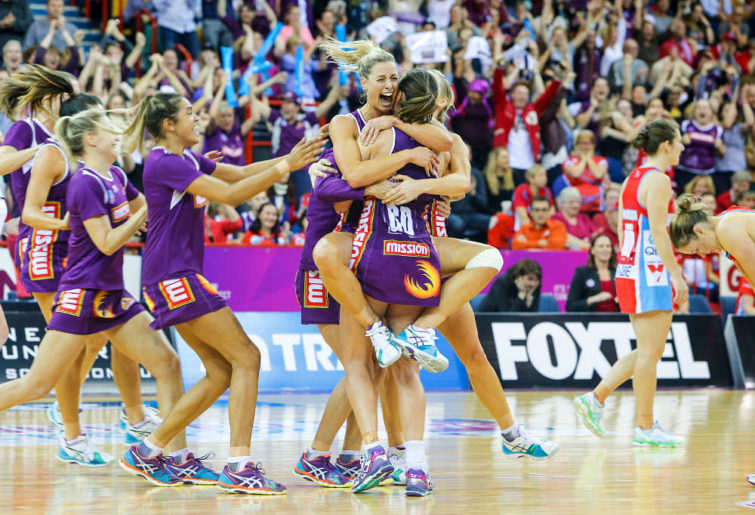 Melbourne Vixens
The Vixens were minor premiers in the inaugural season of Suncorp Super Netball but then lost in both semi-finals and finished fifth in 2018. The Vixens back and mid courts are virtually identical to 2018. Two Diamonds Jo Weston and Emily Mannix along with Jamaican Kadie-Ann Dehaney will again patrol the defensive circle. Dehaney’s height and athleticism offer an alternative to Simone McKinnis to combat the likes of Romelda Aitken, Jhaniele Fowler and Shimona Nelson. Renae Ingles, Kate Moloney and Liz Watson will offer stability and experience in the midcourt.

Tegan Philip will again be out the front of the circle, but the injury to Malawi’s Mwai Kumwenda has seen the Vixens recruit South African SPAR Protea Ine-Mari Venter and the return of the prodigal daughter Caitlin Thwaites, who was a member of the Vixens 2009 premiership team. This trio will bring a flexible and dynamic feel to the shooting circle.

NSW Swifts
The NSW Swifts started Super Netball with three wins and a draw in 2017 before improving to six wins and a draw in 2018. The Swifts have lost captain Abbey McCulloch, who is rehabilitating a knee injury. The shooting circle will again see Trinidad and Tobago shooter Sam Wallace combine her size and athleticism with the speed and creativity of English Rose Helen Housby. While young gun Sophie Garbin will be putting plenty of pressure on this pair and expect her to take her opportunities with both hands.

Paige Hadley will bring plenty of experience to the midcourt along with new captain Maddy Proud and they will combine with another English Rose Natalie Haythornthwaite, who joined the Swifts as an injury replacement late in 2018. Both Housby and Haythornthwaite won Commonwealth Games Gold and will both be pushing hard for England spots for the World Cup.

In defence Maddy Turner has been a revelation with her athleticism and toughness and Sarah Klau due to her size is one of the best defensive rebounders in the business. Kate Eddy, who can also play wing defence and Lauren Moore round out the defensive end. With Klau being the oldest member of that quartet at 24.

Collingwood Magpies
The Magpies entered season one with a star-studded line-up on paper but finished fourth and were defeated in the minor semi-final by Giants netball in a one-goal heartbreaker. The Magpies had a disappointing second season featuring only three wins and a draw to finish seventh.

There have been dramatic changes at the Magpies with the retirement of Erin Bell, Shae Browne and Australian netball cult hero Sharni Layton. The Magpies also did not re-sign shooters Caitlin Thwaites and Alice Teague-Neeld or coach Kristy Keppich-Birrell. Former NSW Swifts coach Rob Wright was elevated from an assistant coach to the head coach for 2019.

The Magpies have added Lightning premiership stars Geva Mentor and Kelsey Browne. Mentor is like a fine wine – she seems to get better with age – and Browne’s form ripped Lisa Alexander’s door off at the hinges as Browne stormed into the Australian Diamonds team during 2018.

Kelsey will team up with her sister Madi, Kim Ravaillion and Ash Brazill in the midcourt. Brazill has had an incredible 12 months winning the Magpies Netball best and fairest, being runner-up in the Magpies AFLW best and fairest and being named in the AFLW All Australian team. Brazill must have been desperately close to Diamonds selection in 2018.

Collingwood have inserted a mixture of youth and athleticism and experience to their shooting circle with 20-year-old Jamaican Shimona Nelson (Adelaide Thunderbirds) and Natalie Medhurst (West Coast Fever).

Adelaide Thunderbirds
The Thunderbirds have had only one victory in the past two seasons, coming in Round 1 of 2017. Their last win was on 19 February 2017. As a result, wholesale changes have been made, with Tania Obst also replacing Dan Ryan as coach.

Adelaide’s best player in 2018, Kate Shimmin, returns, but she is not guaranteed a spot in the defensive circle. Adelaide has recruited Briton Rose Layla Guscoth, who has been appointed co-captain of the Thunderbirds, and Jamaican Sunshine Girl Shamera Sterling, who was the UK Superleague player of the year in 2018 and topped the intercept count at the 2018 Commonwealth Games.

In the midcourt another English Rose has been recruited in Beth Cobden. Cobden was named in UK Superleague All Star VII in 2017 and 2018 and won gold at the 2018 Commonwealth Games. Cobden is returning from an ACL injury, so it will be interesting to see how quickly she recoveries from the injury and returns to full output. If Cobden’s return is delayed, Guscoth would be likely to wear the wing defence bib. Hannah Petty is expected to start at centre, while Chelsea Pitman, who has represented both Australia and England and is co-captain, will be at wing attack.

The star recruit in the shooting circle is New Zealand Silver Fern star Maria Folau, although the troubles of her husband, Israel, with Rugby Australia may be weighing heavily on her mind. Cody Lange returns to Adelaide after two years with Collingwood. Lange injured her knee in 2017 and in 2018 captained the Tasmanian Magpies to the ANL title.

Another South Australian, Sasha Glasgow, rounds out the goal-shooting circle for the Thunderbirds. Each of these players has the flexibility to play either goal attack or goal shooter. Based on their recruitment, the Thunderbirds should improve considerably from the last two years.

If you live off Broadway in a netball sense, don’t worry; there may be a match close to you. There are matches being played in Bendigo (Saturday, 25 May), Darwin (Saturday, 8 June), Canberra (Sunday, 4 August) and Launceston (Saturday, 17 August).

Bring on the first centre pass.