The final part of the Round 5 review covers the two Sunday games and the traditional Easter Monday game between Hawthorn and Geelong.

There is no doubt that Eddie Betts stole the show on Sunday. Six goals in his 300th game show us what a showman he is, and his milestones were many:

Eddie now sits in equal 77th position on the AFL all-time top 100 game players with all these champions.

2. His six goals on Sunday takes his total AFL goals to 575, and takes him past Norm Smith (Melbourne and Fitzroy), Stephen Milne (St Kilda) and Richard Osborne (Fitzroy, Sydney, Footscray and Collingwood) and draws him level with the two Simons – Madden (Essendon) and Beasley (Footscray) in 36th place on the all-time AFL goalkickers list.

3. In his two-way battle for the fourth position on the Crow’s all-time goalscorers list, he streaked away from Josh Jenkins and leads him by seven goals as he now has scored 285 goals for Adelaide and trails number three (Mark Ricciuto) by only seven goals.

4. He moved to equal number 43 on the games played list for the Crows, joining Matthew Liptak and Ian Perrie on 116 games.

6. He holds and will continue to hold for many years the number 13 position on the Blues’ top 100 goal scoring list.

7. Despite having played 68 games less for the Crows than the Blues, by increasing his goal average per game from 1.57 at Carlton to 2.45 at the Crows he is within five goals of the total achieved at Carlton. 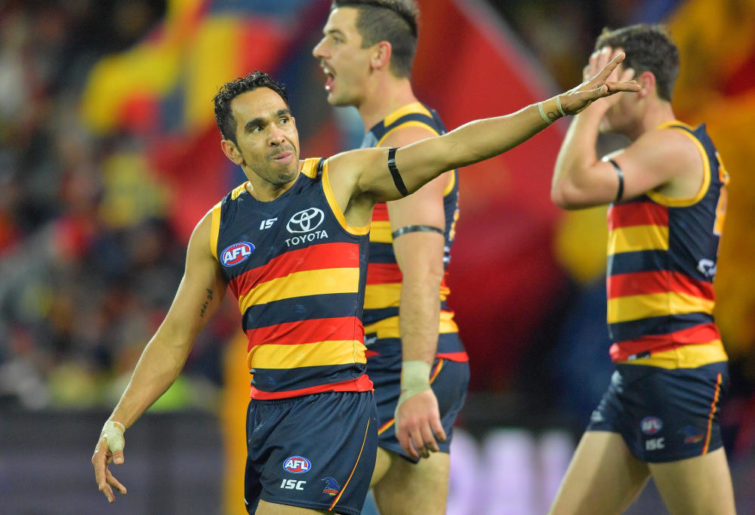 The Eddie-fest took some of the glory away from Crows captain ‘Tex’ Walker who – by scoring three goals is a so far, lean 2019 season – climbed into the ‘hot seat’ of the greatest 100 AFL goal kickers of all time, sharing the 99th position with Phillip Matera (West Coast Eagles), Lloyd Hagger (Geelong) and Alec Albiston (Hawthorn and North Melbourne).

Carlton (at last) had a convincing win in the other Sunday game in which the only highlight for the Western Bulldogs appeared to be Tory Dickson’s two goals that took him to level with Mitch Hahn on 164 goals and into the top 30 goal scorers at the Bulldogs.

The final Easter game featured the old foes Hawthorn and Geelong and – once again – the champions were on display with Roughy and Danger both goaling early and Gary Rowan causing grief for Hawthorn. As suggested in an earlier article, Danger did beat Jordan De Goey and Anthony McDonald-Tipingwati to the 100 goal total and Geelong had a quality victory over the depleted Hawks.

Gary Rohan finished with four and Gary Ablett with three.