Board stoush shows, yet again, who rules world cricket

The off-field wrangling between Australian and Indian cricket officials is further proof of Cricket Australia’s reliance on India’s riches, and a reminder of who holds all the cards in world cricket.

The point is far from a revelation, as we’ve known for some time the degree of influence held by the Board of Control for Cricket in India. And we don’t have to look back far to see examples.

In fact, almost exactly 12 months ago Cricket Australia were trying to convince the BCCI to allow it a day-night test during the summer’s four-test series.

It replied with a flat no, and that was that. The clout Australia once held in these negotiations has been, and continues to be, whittled down.

The timeline of events in the last three weeks isn’t pretty reading for Australian officials.

It started with the BCCI bringing forward a three-match ODI series against Australia from late January to January 12. In turn, this meant CA has had to drop a planned one-day series against New Zealand, scheduled for that same period.

This means that, for the first time in 40 years, Australia won’t play a single ODI at home all summer. It also raises the frankly embarrassing possibility that Australian fans, should their team win the World Cup in the coming months, won’t see their side in action for 12 months.

As if that wasn’t bad enough, the result is also a huge free kick to the Australian Open, with whom CA battles for January eyeballs.

Frustrated, interim high-performance manager Belinda Clark insinuated in an email to Indian officials that the availability of Australia’s three leading women’s cricketers (Meg Lanning, Ellyse Perry and Alyssa Healy) for the upcoming Women’s IPL could rest on the outcome of those negotiations: “We will be in a position to consider the request when the current issue regarding the men’s ODI series that was agreed in the FTP for late January is resolved by Rahul (Johri, BCCI CEO) and Kevin (Roberts, CA CEO),” the leaked email read.

This, as it turns out, was a costly mistake. While CA maintains Clark’s intention was not to use the trio’s availability as leverage, Indian officials viewed it as a “blackmailing tactic”. As such, they leaked the email and put fuel on a growing fire.

The BCCI called CA’s bluff, and it has now left the World Cup-winning trio stranded in Australia, missing out on a burgeoning event on the women’s calendar, and a handy payday. It forced CA to make a public apology to the players, blaming a “communication breakdown”.

Further leaks against CA were made earlier this week when an alleged email from chairman Earl Eddings to the BCCI acting secretary Amitabh Chaudhry and Johri were reported on ESPN Cricinfo.

This time, the email claimed that CA has told the BCCI that, to compensate the $1.4 million forecast loss for cancelling the New Zealand series, India would need to play an extra ODI in Australia down the track to make up that figure. Indian officials are likely laughing at the demands of a board it now sees as small fry. Because when you’re the BCCI, people accept your offers – not the other way round.

Now unshackled from official duty at CA, former Australian captain Mark Taylor made no secret the potential harm of Australia giving up its home ODI series against New Zealand.

“If CA does roll over and allow the team to go to India in January, it then opens up our summer for future negotiation if other countries want to do the same thing,” he said on Wide World of Sports.

“One thing CA has done very well in the past is keep our summer well protected. I hope CA will fight fairly hard to keep that tradition going. This will be a litmus test for CA. How big a battle is this for Australian cricket?” 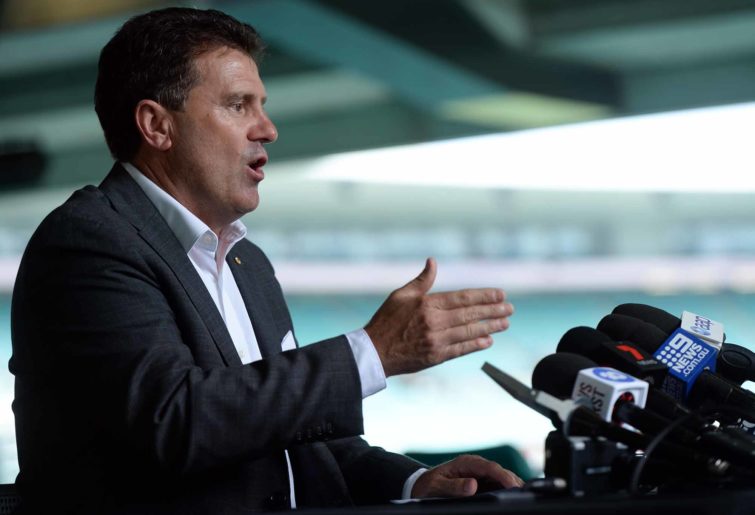 Another camp that is far from pleased with developments is Fox Sports, who paid a pretty penny for exclusivity to home ODIs and T20Is in last year’s rights negotiations. The ODIs (which viewers can’t watch on free-to-air television) are a significant enticement to garner subscribers, and the cancelling (or at best, re-scheduling) of the New Zealand series represents another unhappy party CA must deal with.

If the recent dispute was conveyed in on-field parlance, the Indians would be 2 for 500 after bowling Australia out for 150. They’re in cruise control, unrelenting from their position of dominance.

Roberts and Eddings are likely due to fly to India for face-to-face discussions in the coming weeks. Mending bridges will be the new leadership team’s first crucial act of diplomacy.